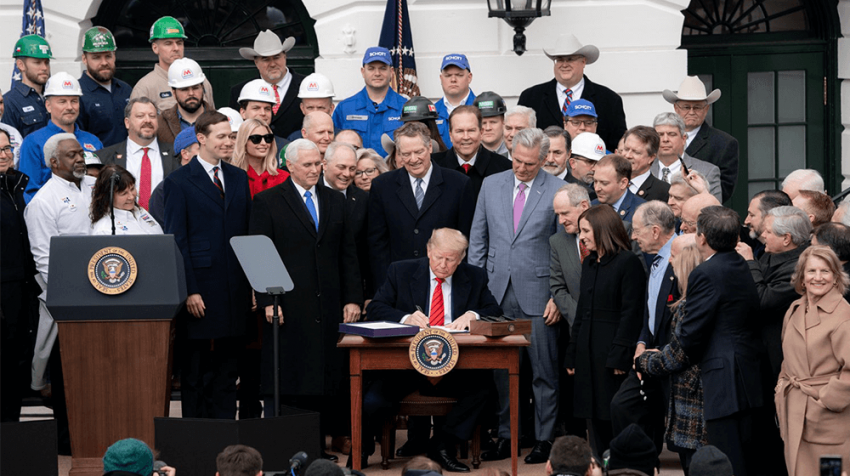 President Donald Trump signed the United States-Mexico-Canada Agreement (USMCA) on Wednesday, January 29, 2020. This is the culmination of a 16-month battle, which will benefit small businesses greatly.

With the passage of the USMCA, small business is going to thrive with more opportunities in Canada and Mexico. According to U.S. Small Business Administration Administrator Jovita Carranza, “This new framework will make it easier to sell products to consumers in Canada and Mexico by eliminating complex and cost-prohibitive rules requiring small businesses to open foreign offices.”

Carranza goes on to say, “$68 billion in new economic activity will be generated, and an estimated 176,000 new jobs will be created, helping to further fuel upward mobility in communities that need it most.”

For his part, the President added, “The USMCA is estimated to add another 1.2 percent to our GDP and create countless new American jobs.”

The passing of the USMCA in Congress marks a rare bipartisan agreement. A clear majority that highlights the value of the new trade arrangement between Canada, Mexico and the U.S.

Small Business and the USMCA

With the USMCA, small business is going to see higher export numbers, and considering most of them already export, it will provide immediate results. But it all starts with the number of jobs U.S. trade supports with Canada and Mexico.

This comes out to a whopping 12 million American jobs, according to the U.S. Chamber of Commerce. Furthermore, overall U.S. goods exports and trade with the two countries was nearly $1.4 trillion in 2018.

The Small Business & Entrepreneurship Council (SBE Council) reports 143,634 small firms export to Canada and Mexico, while 32,758 import. And the majority of these businesses have less than 20 employees, so they really are small businesses.

The president & CEO of the SBE Council, Karen Kerrigan further explains some of the other benefits of the signing of the USMCA by President Trump.

Even better, it will get rid of more regulations. Kerrigan adds, “Provisions dedicated to cutting costs and red tape at the border are especially vital for small businesses. In terms of their ability to compete profitably and pursue opportunities in these markets.”

All this adds up to more benefits for small business owners in the U.S.

The North America Free Trade Agreement (NAFTA) has been in effect since January 1, 1994. The passing of the USMCA is ushering in a new era of trade between Canada, Mexico and the U.S. While the overall impact will not be known long after its implementation, here are some of the benefits small businesses can expect.

Here are some of the other benefits.

One of the more important benefits for companies in the tech sector is it forbids customs duties on digital products with electronic distribution. This includes e-books, videos, music, software, games, and other channels.

At the same time, USMCA supports cross border services by eliminating local presence requirements which will greatly benefit small businesses. If a small business provides cross-border services, it no longer has to open a foreign office. In the past, this was a condition for doing business.

You can read the full fact sheet from the Office of the United States Trade Representative here for more on how the USMCA supports SMBs.

In 2018, Canada, Mexico and the U.S. signed the first USMCA. In December the House approved legislation to implement the USMCA. It passed by a vote of 385 to 41, with 193 Democrats and 192 Republicans backing the pact. In the Senate, the voting passed with 89 to 10 in favor of the agreement.

The only thing left is for Canada and Mexico to follow suit and sign the agreement. Mexico has already approved the new version. And the Canadian Prime Minister says his country will be the last to ratify the agreement.