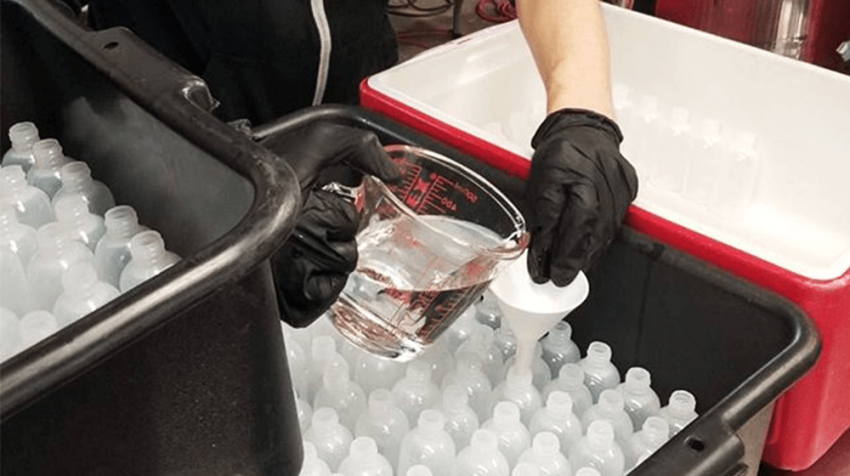 With hand sanitizers going out of stock in stores and distribution centers, it is leaving many without during the coronavirus outbreak. Alcohol distillers are trying to fill the gap. This is in part due to the Tax and Trade Bureau giving the green light for alcohol beverage producers a special exemption to make hand sanitizer.

Before the coronavirus outbreak, the production of sanitizer was minimal due to low demand. However, the demand for sanitizers has peaked exponentially because of the growth of the outbreak.

Hand sanitizers generally decrease infectious agents on the hands. They are believed to be more effective at killing microorganisms and better tolerated than soap and water. This is because hand sanitizers are made mostly of alcohol. And because distilleries make alcohol or ethanol, the key ingredients in sanitizers, it is proving to be a great match. The Centers for Disease Control and Prevention (CDC) recommends that an alcohol-based hand sanitizer have at least 60% alcohol.

Below are some distillers who are working towards easing the shortage by switching from producing liquor to hand sanitizers.

This Pennsylvania based distiller has diverted production towards sanitizers to ease the shortages and has also donated some of their product.

“We’re were able to produce so far approximately 5 cases of sanitizer which have been donated to two different nursing homes, one hospice agency and the local fire company,” reads the message on their Facebook page.

This distiller has started making and providing hand sanitizers of 2 oz bottles for $3 with sales limited to 2 bottles per person.

This distiller from New Hampshire is providing free sanitizers for personal use. Those seeking some sanitizers can either bring a bottle or take one free from the distiller.

This vodka distiller has announced it testing its sanitizer formula. Once it finalizes the formula and packaging, it plans initial production of 24 tons of hand sanitizer over the next several weeks.

Yahara Bay has come out with a nifty marketing strategy by combining vodka and a hand sanitizer. It’s Just Vodka, a 140-proof, 70 percent Alcohol By Volume (ABV) vodka, which also functions as a hand sanitizer.

This distillery has opened its doors for hand sanitizer pick up and sale. It has however set limits on the volume of purchases people can make. The maximum purchase per person is 4. 5 oz bottles and 1 Quart size container.

Michigan based Coppercraft Distillery has announced in addition to regular production, it would produce and donate about 10,000 gallons of hand sanitizer to ease shortages. The distiller says it’s following a formula from the World Health Organization (WHO) by primarily using glycerol and a grain spirit to create a hand sanitizer that’s just under 80% alcohol.

Asbury Park Distilling Co. has shifted its spirit production in favor of producing hand sanitizers. This distillery is offering two free 2-ounce bottles of its hand cleaner to retailers and restaurants who remain open to serve the community in a bid to keeping communities resilient.

The brewing giant Anheuser-Busch the maker of Budweiser has too joined the fray into producing sanitizers. It has announced it is using its supply and logistics networks to begin producing and distributing bottles of hand sanitizer to accommodate the growing needs across the nation.

The behemoth rum distiller has also announced that it will be supplying Ethyl Alcohol, or ethanol to produce the much-needed hand sanitizers that are in high demand as a result of COVID-19. In addition, it has pledged over half a million of the 10-ounce hand sanitizer units produced in partnership with Bacardi to be donated to local communities.

The number of companies helping the nation and the communities they serve is growing by the day. So, this is just a partial list.