Jenn VandeZande of SAP: The Uncomfortable Truth About Women in Tech 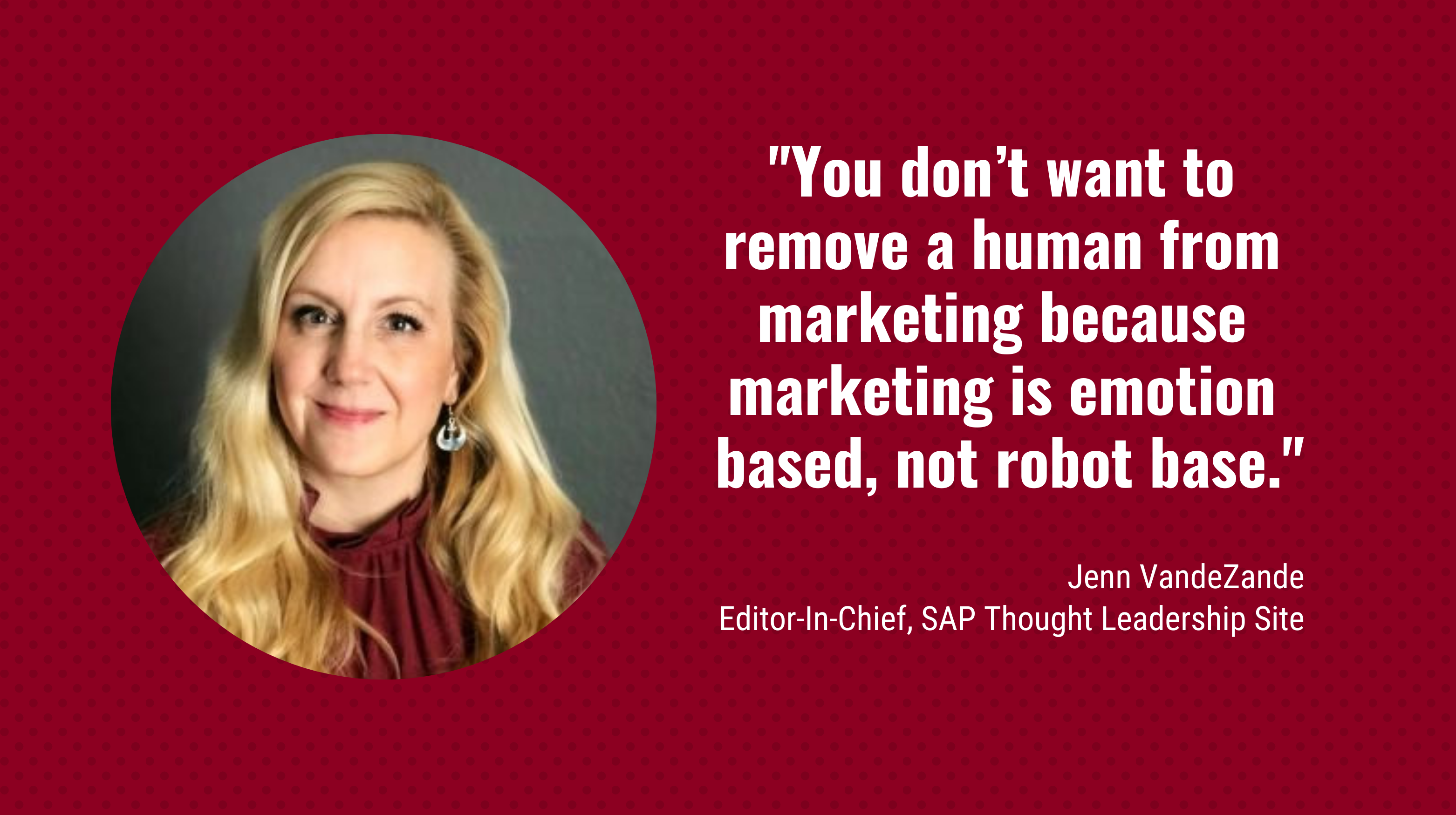 What’s the status of women in tech? With International Women’s Day coming up this weekend, I had the real pleasure last week of moderating a panel on inclusion and diversity during the inaugural Ambient Experience Summit held in Atlanta and organized by Constellation Research.  It was a great event and I was proud to be the local host for the conference.  But the highlight for me was the panel, which featured Jenn VandeZande, Editor-in-Chief of SAP’s thought leadership site, and Lately CEO and founder Kate Bradley Chernis who we just spoke with for the series.

The conversation with Jenn and Kate was honest, open, blunt and eye-opening.  And while quite a bit of it was sobering, we were also able to find some humor along the way.  But the bottom line is that we still have a ways to go before some of the uncomfortable truths that were touched on can be turned into meaningful actions to change where things stand today.  And I think Jenn, Kate and the Constellation team (Ray Wang, Nicole France, Liz Miller, Meghan O’Neill Ruona and Aubrey Coggins) for making this session a part of a great agenda. Thanks to Constellation also for making this video available for us to feature here in the series.

Below is and edited transcript of the session.  To see the full conversation watch the video or click on the embedded SoundCloud player below.

Small Business Trends: You went through a transformation with the site. Why don’t you talk about that, but also talk about why it was important to you to do that.

Jenn VandeZande: When I came on board about five years ago, I think some of the first conferences and things that I went to, I was like, where are the women? And then a couple of years later, heard somebody say, there aren’t women in positions of power. Because we actually don’t see women in positions of power, and I really took that to heart and I thought, I’m doing this thing that’s not just customer facing but industry facing.

And I made a really tough assessment. I went through the site and actually did an assessment of how many images of women were on there. And the images of women that were on the site were literally, all of them on retail posts about shopping and they were shopping and the images of men, were CEO, C-suite execs. So then I said no. I’m just going to go ahead and change this because I’m the one hitting the buttons. So I started going through that process a couple of years ago trying to swap out images. But actually at that point in time, even with Getty and iStock, I’d look for images of CEO and it was all white men and it was like even in the land where images are staged, you could just pretend that there’s equality.

Small Business Trends: There were no pretend women CEOs?

Jenn VandeZande: No there weren’t. And so we really made a measured effort to rebrand the site, rename it, did a new logo, changed out all the images. There was also a big business outcome. We saw our metrics going up, time on site going up. 99% of our archives are viewed every day, which is pretty incredible for a site that’s five years old, but really also started paying attention to who our contributors were and trying to level that out, putting women at the table and at the forefront pursuing them as thought leaders and making uncomfortable, continually uncomfortable assessments and speaking up.

Jenn VandeZande: So there’s an app where you can actually track who’s talking in the room, men or women, and I did that today.

Small Business Trends:  Well, are you going to leave us hanging?

Small Business Trends: So I’m the first guy who’s going to take a …

Jenn VandeZande: Anyone in the audience want to take a guess at the percentages?

Jenn VandeZande: But that’s super uncomfortable to say, right? So even before this I’m like, Oh my God, do I actually say this out loud? But that’s really the only way we’re going to drive change because I think missing from this panel is actually also, besides a panelist, a man, because right now the reality is the balance is so stark that it is men who will be promoting women and giving them the opportunities that haven’t been afforded to them over the years. So we really need men to advance women and they need to be on the stage too when we’re talking about this and helping to push forward that change so that, yes, so that’s my little spiel.

Small Business Trends: All right, so the when we open up for questions, I don’t want none of you dudes saying anything right away. [Laughter]  Going to change that right away because there’s a lot of making up to do right here. All right…. Now notorious one.

See Also: 9 Tips From Top Women in IT You Can't Afford to Miss

Small Business Trends: You have a really interesting story because you’re a tech startup in AI and you’re a female entrepreneur, CEO, founder and all that.

Small Business Trends: Tell us how difficult is it in today’s economy and tech scene to be a CEO, female founder?

Kate Bradley Chernis: I’m sure you guys have heard this stat, but it came out about a year and a half ago, only 2% of all the female founded companies get venture funding. 2% which means, I’m pretty awesome….

Small Business Trends: And let me add to that, because you gave me another stat on top of that one.

Small Business Trends:  Please somebody Tweet that out, that’s important.

Kate Bradley Chernis: It’s super bad. And the other interesting stat is, and I can’t remember the exact number, but the female led companies have a 30% chance of more successful exits than male. So the investment is actually smart, but we go up against it all the time and sure there’s sexual harassment. Sure, there’s all this stuff that’s obvious. But what’s interesting is women actually behave the same way towards women as the men do. So give you an example.

There are these questions that investors ask you all the time. They’re pretty much the same. You start to learn what they all are and they typically, men and women investors, ask female entrepreneurs the loss questions and they ask the men the growth questions. So, for example, they’d ask you, how do you plan on growing your customer base if you’re a man?

And then they’ll ask me, how do you plan on keeping your customers? How do you plan on doing churn prevention, for example, right? And it’s my job, the onus on me to learn how to answer in the male way, and to twist that around. It’s messed up…

Small Business Trends:  That’s one way of putting it.

Kate Bradley Chernis: …which is why I was doing some pushups because before I go into those meetings, I want to feel really strong, and a little pump…

Small Business Trends:  Little pump. Okay. Part of your platform is AI. And we have seen all these articles around the biases, the inherent bias that we’re seeing with AI. Particularly there was one study that talked about, every other kind of person can get recognized pretty significantly by AI, but when it comes to black women, it was like, what’s that? They see a picture of a black woman, AI couldn’t determine what… So as a woman in AI, as a tech founder, how do we fix these inherent issues? How do you look at it? Because you have AI technology? How are you approaching it from that perspective?

Kate Bradley Chernis: So first and foremost, we do exactly what Jenn does and what so many other people in this room do is we put the onus on the humans. So our AI is designed to start you at third base and then there’s the human’s job to pop in and get that content up to home plate. And the reason is is because you don’t want to remove a human from marketing because marketing is emotion based, not robot based, right?

Kate Bradley Chernis: And also humans are smarter than AI in the end, right? Because we understand those nuances. So we’re a little bit sneaky because we put it back on the user to have that responsibility. But of course our job also is to be very aware and alert. We have a lot of data that we’re paying attention to and we are very interested to see what AI is learning and what’s succeeding and then being able to use that down the road and pass those learnings onto our customers.

Small Business Trends:  So Jenn, you go to a lot of events, you speak at conferences, you’ve talked to all sorts of people, people write for the site. Are you seeing more diversity, inclusion like what we’re doing here, but at other conferences? Is it starting to get a little bit more averaged out? Seeing women on the stage from a technology… I don’t even have to finish the question!

Jenn VandeZande: There’s also a silent look between women where it’s like, yeah we know what’s coming next.

Small Business Trends:  I was like, somebody’s about to pass the question…

Jenn VandeZande: Actually there’s a ton of conversation around it, which I’m exhausted with because we’re actually, there hasn’t been growth. We are talking about it; we are spending money on it; we’re promoting it. But we’re not promoting women. There actually has not been growth since 2016 when you’re talking about women. I have an article coming out for International Women’s Day, which is titled, “There’s more CEOs named Jeff than there are female CEOs“.

Jenn VandeZande: It’s true. Yeah, it’s true. You’re omitting half of the human race. And it’s like when we’re talking about product design, you have people designing products that are, women are using and you wonder why the product doesn’t work. It’s because you’re not actually including us, it’s half…

Small Business Trends:  It’s Butch is over there, drinking beer [designing a product for women]

Jenn VandeZande: It’s nice to talk about it. But it’s often women are over-mentored and under sponsored.