30% of Etsy Sellers Don’t Save for Emergencies 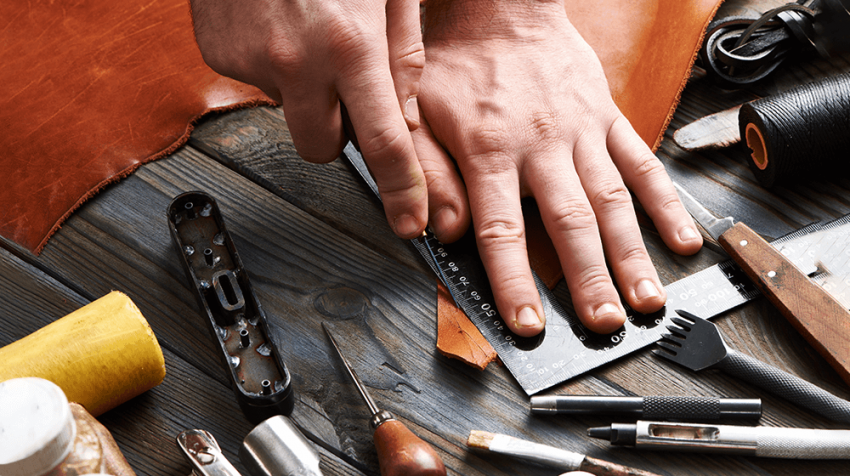 A new survey and report carried out as part of BlackRock’s Emergency Savings Initiative reveals 30% of Etsy sellers don’t save for emergencies. The survey highlights the financial positions of non-traditional workers, not only on Etsy but across the board.

Non-traditional workers, micro-entrepreneurs and small businesses, in general, are facing considerable challenges as they adapt to the changing nature of work during the COVID-19 outbreak. Although the survey was conducted before the pandemic, it is helping to understand how non-traditional workers are coping financially during this crisis.

Titled, “Financial Security and Emergency Savings Among Non-Traditional Workers: The Case of Etsy Sellers” the report looks at the importance of emergency saving for financial security. But it is becoming increasingly more difficult to save for Americans as the nature of work continues to evolve.

The survey is a collaboration between Etsy and BlackRock’s Emergency Savings Initiative along with Commonwealth. The goal of the survey is to understand the financial needs and concerns of sellers. However, the focus was primarily addressing emergency savings.

In this survey, 39% of Americans say they are unable to handle a $400 unexpected expense. It supports another data point from the U.S. Financial Health Pulse 2019: Trends Report in which 47% of Americans don’t have enough savings to cover the recommended three months of living expenses. Even more distressing, 12% said they have less than one week of living expenses saved.

The Changing Nature of Work

The traditional full-time is becoming less common as the employment arrangements in the workplace continue to change. When it comes to the gig economy, the survey says it will account for 43% of the workforce by 2020.

Etsy has 2.5 million entrepreneurs on its site who are part of this change. The sellers are working outside of the traditional employment arrangements. And this is just one platform. There are many other platforms that are supporting tens of millions of people.

As the report points out, the challenge is to support these workers by giving them access to the same benefits as traditional works. But their income is volatile, which plays a big role in the financial stability they face in their lives.

Etsy has carved out a marketplace for makers and their customers who want unique, handmade items. The company sold $5 billion worth of these items in 2019 from the 2.5 million sellers on its site, 83% of whom are women.

Overall, 30% of sellers on Etsy rely on the platform for their only source of income. Another 31% of the sellers also have a traditional full-time job. This is in part responsible for creating income volatility, as 37% of Etsy sellers say their income varies occasionally or it is highly unpredictable.

It is this unpredictability that makes it hard to overcome financial emergencies. And considering emergencies are common for Etsy sellers it is a problem.

Close to two thirds or 61% of sellers on Etsy have had an emergency expense of more than $400 in the past year. But for 20%, their most recent emergency cost was between $400 and $600. It doesn’t stop there though,  23% say their emergency expense was more than $2,000. Auto repair and/or repayment and medical bills and/or prescriptions made up the most common emergencies at 37% and 32% respectively. 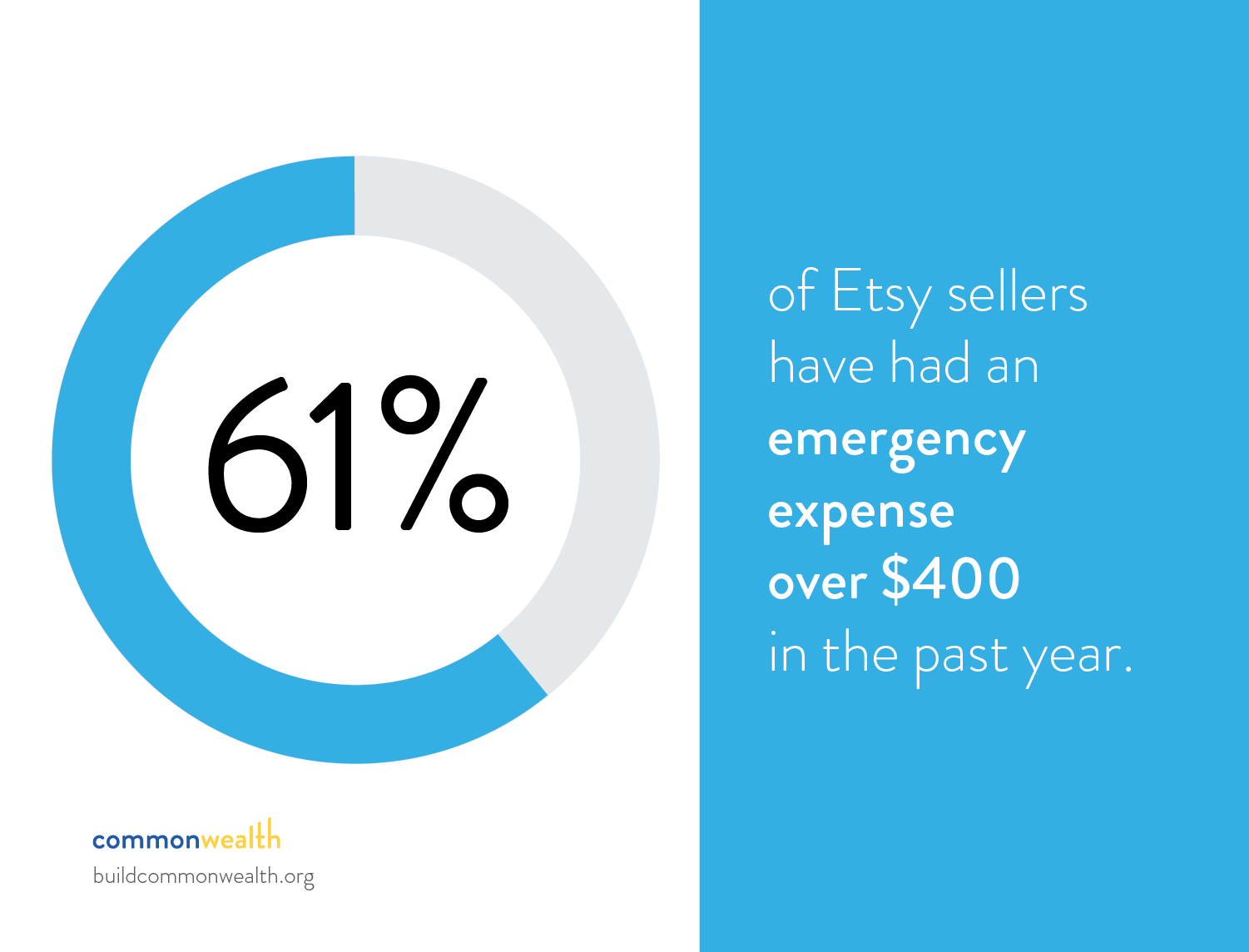 Even with these numbers of emergencies, saving is not a priority for all sellers. Thirty percent don’t save for emergencies, 35% save a variable amount monthly, and 26% are saving a fixed amount each month.

Sellers say they would like help from Etsy to address some of their emergency financial concerns.

Almost three quarters or 74% of sellers are interested in getting assistance from Etsy for emergency financial help. 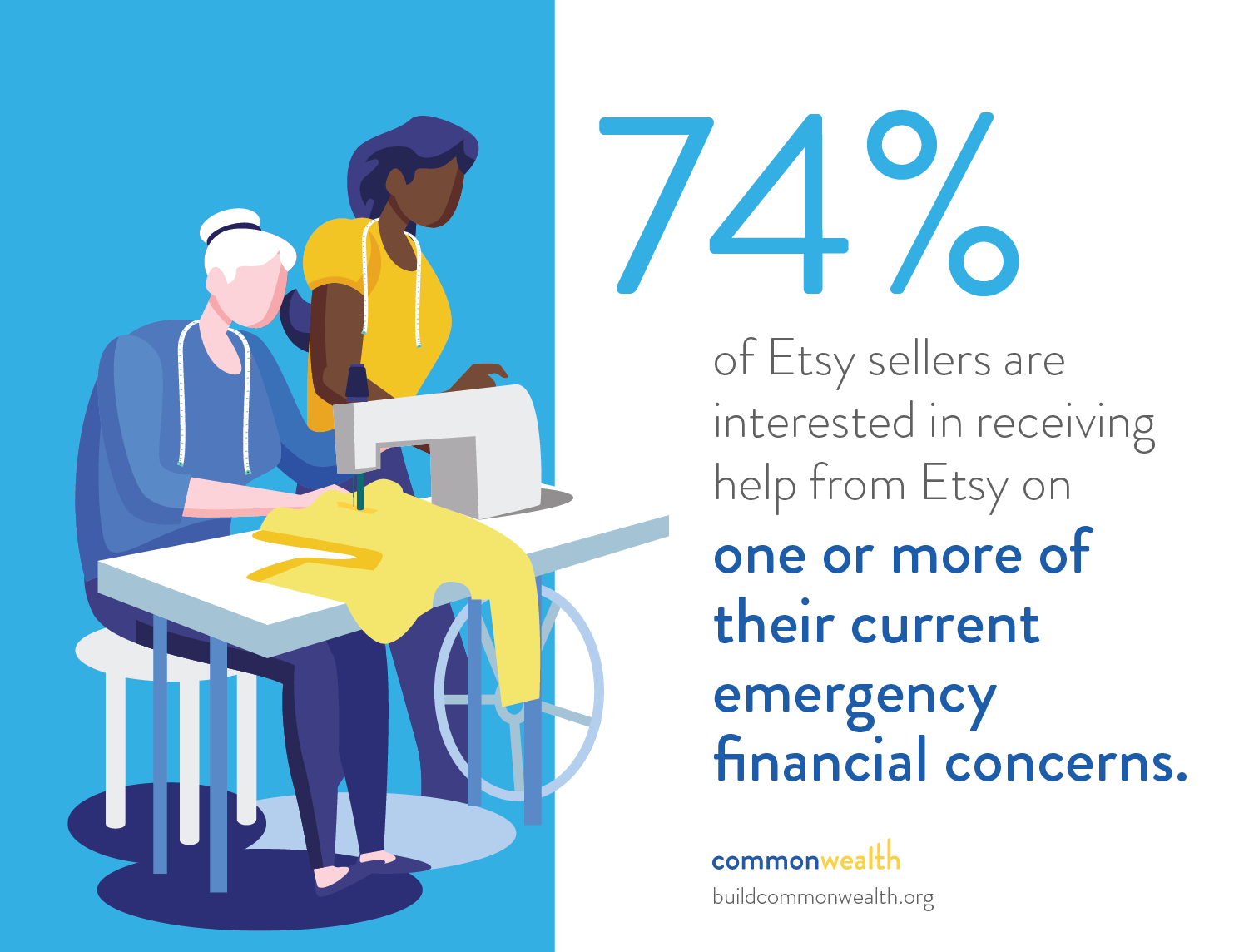 The majority or 38% want help in paying off their debt, save for a purchase or expense or emergencies. Another 28% specifically want emergency savings.  And 21% want help for times of the year when they have less revenue coming in.

To that end, the goal of Commonwealth is to strengthen the financial opportunity and security of financially vulnerable people. By collaborating with consumers, the financial services industry, employers, policymakers and mission-driven organizations, Commonwealth has enabled 750,000 people to accumulate more than $2 billion in savings.