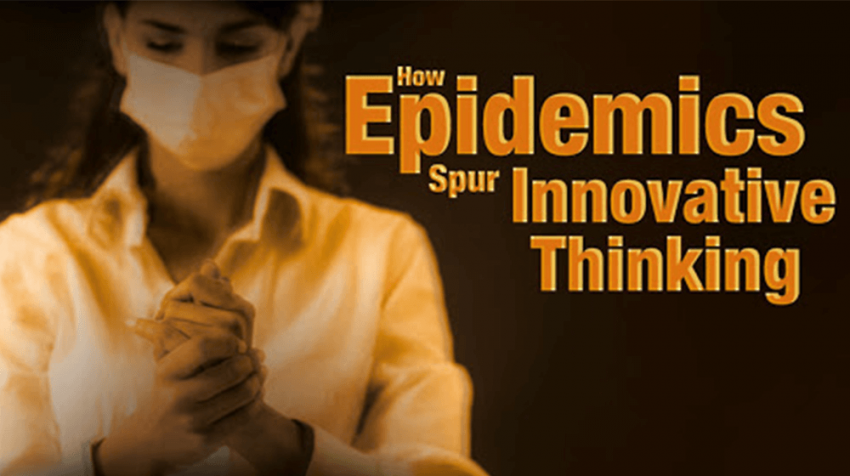 Innovation comes from environments where ideas can connect. So, what kind of environment does an epidemic create when it comes to spurring innovation.

This is the very question a new infographic from Top Masters in Public Health Degrees developed by NowSourcing looks to answer. According to the report, ground-breaking innovations have come despite the tragic effects of epidemics throughout history.

This is a timely report because people are coming up with some innovative ideas to address many of the challenges brought on by COVID-19. The second part of the infographic looks at how individuals, small businesses and large organizations are coming together to solve these challenges of today.

As epidemics go, the Black Death of the 1300s was devastating. The plague as it is also known, wiped out up to 60% of the population in Europe. According to the report, it was responsible for changing the economic and social structure of Europe and the creation of a middle class. Furthermore, it sparked interest in literacy, art, and experimentation.

There were other outbreaks of the plague in England later on. In 1592, London faced an outbreak that shut down theaters for six months. This led Shakespeare to start writing poetry to make a living. And it was during this time he wrote Venus and Adonis, and The Rape of Lucrece. Another plague in 1606 also closed the theaters in London, and this time Shakespeare apparently wrote King Lear, Macbeth, and Antony & Cleopatra.

A plague from 1665 to 1666, was responsible for making Isaac Newton flee to the countryside where he came up with his theories on calculus, optics, laws of motion, and gravity.

In the U.S., the Boston smallpox epidemic of 1721, led to the spread of variolation which was responsible for reducing the mortality rate from 14% to 2%, as well as the first steps towards vaccines. And the debate of inoculation ushered in a new era in journalism.

The Spanish Flu of 1918 was responsible for the death of 50-100 million people. The pandemic marshalled in a new era of public health. The underlying causes of illness, like diet and living conditions were now being considered.

A little over a century after the Spanish Flu, COVID-19 is wreaking havoc around the world. And although the death rate is nowhere close, the economic impact has been overwhelming. On the negative side, it has highlighted many of the shortcomings in the healthcare industry as nurses and doctors battle the virus woefully underequipped.

With increased connectivity and technology, innovators around the world have responded by making the equipment healthcare workers desperately need.

Today’s innovators are addressing ventilator shortages by using 3D printers and designing simpler ventilators; distillers are producing hand sanitizers; companies are making washable and reusable masks; apps are tracking the virus and Facebook, Google, and Twitter are combating the spread of misinformation.

You can find more about COVID-19 business advice and information on Small Business Trends.