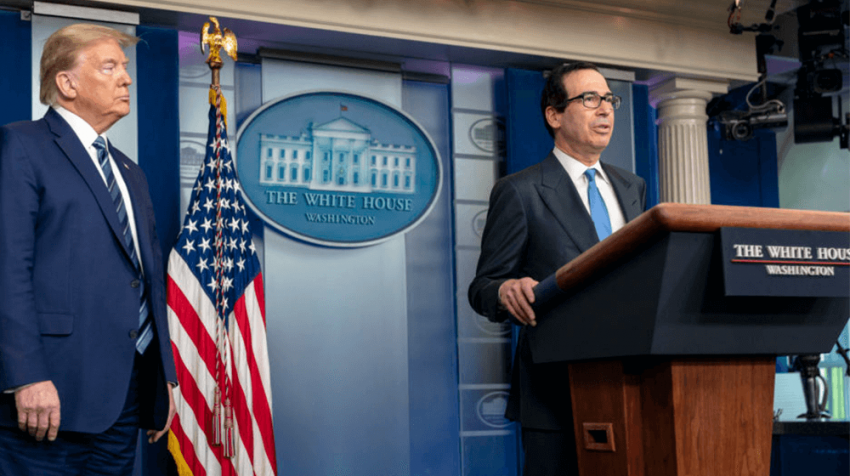 “The intent of this money was not for big public companies that have access to capital,” Treasury Secretary Steven Mnuchin. This statement comes after millions of dollars were given to large companies from the Paycheck Protection Program (PPP).

Everyone from Harvard University to Nathan’s Famous, Potbelly, Ruth’s Hospitability Group, Shake Shack, Kura Sushi, and even the Los Angeles Lakers received millions of dollars. While the Lakers, Shake Shack, and Ruth’s have returned the money, others are still mulling that decision over.

It is important to remember there are consequences. Secretary Mnuchin said, “If you pay back the loan right away, you won’t have liability to the SBA and to Treasury.  But there are severe consequences for people who don’t attest properly to this certification.”

The PPP was designed to give small businesses a loan for retaining their employees or rehire the people they laid off. However, the $350 billion allocated to fund the program quickly ran out of money. And closer scrutiny of how the money was doled out reveals large public companies were getting loans they shouldn’t have.

With the second round of funding just approved, Secretary Mnuchin and U.S. Small Business Administrator Jovita Carranza issued a statement to address the obvious concerns small business owners have.

“We have noted the large number of companies that have appropriately reevaluated their need for PPP loans and promptly repaid loan funds in response to SBA guidance reminding all borrowers of an important certification required to obtain a PPP loan.  To further ensure PPP loans are limited to eligible borrowers, the SBA has decided, in consultation with the Department of the Treasury, that it will review all loans in excess of $2 million, in addition to other loans as appropriate, following the lender’s submission of the borrower’s loan forgiveness application.  Regulatory guidance implementing this procedure will be forthcoming.”

Adding, “We remain fully committed to ensuring that America’s workers and small businesses get the resources they need to get through this challenging time.”

So, what happened in round 1? Simply put some of the money ended up with companies with deep pockets. This is because there were loopholes in the legislation.

The first one of the loopholes is it makes it possible for public companies to borrow money. And 230 public companies did so to the tune of $800 million. Hedge funds and private equity firms also qualified. But in the second round, both loopholes are no longer available.

The biggest loophole, however, still remains open. It allows hotel and restaurant chains to remain eligible for PPP loans. As it stands, each individual location of a company with fewer than 500 employees qualify. This means even the largest of franchises can get the PPP loan. And this is exactly what happened in the case of Shake Shack and others in the first round.

The Treasury Department has released a new FAQ page for the PPP with guidance for companies looking to get a loan.

One of the biggest data points from the SBA is the number of $1 million loans. Almost half of the $350 billion was paid out in loans of $1 million or more.

that is not to say small loans didn’t get approved. According to the SBA, 1,229,893 loans of $150,000 or less were approved. This accounted for a little more than $58 billion of the total amount. However, loans over $1 million accounted for 44.53% of the total funds while only representing only 4.05% of the applicants. The total amount for this particular group comes out to $152.4 billion.

And it is this disparity that has small business owners upset over the process.

This a list of industries according to loan amount for the PPP. 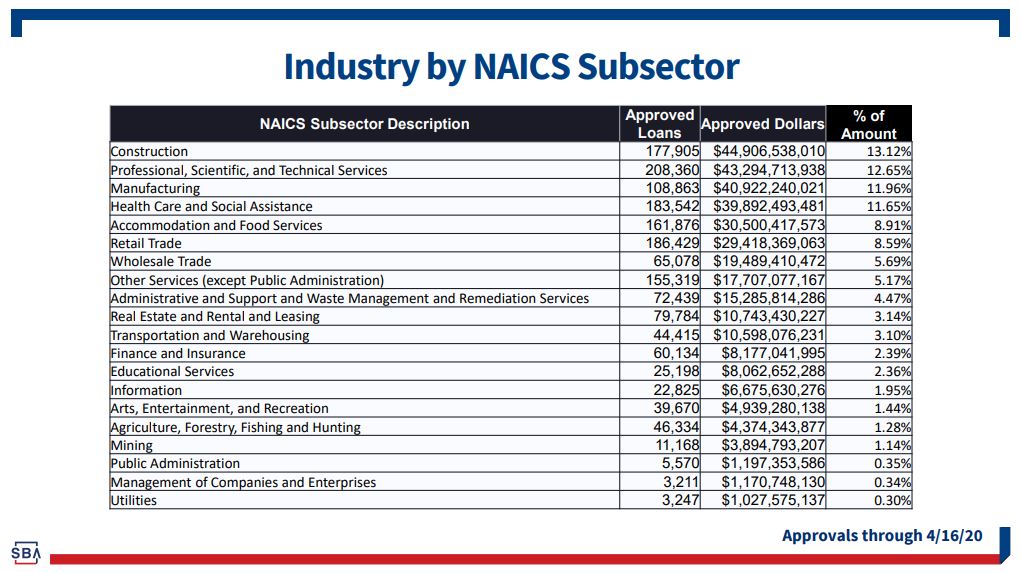