Food Truck Franchise: 10 of the Best 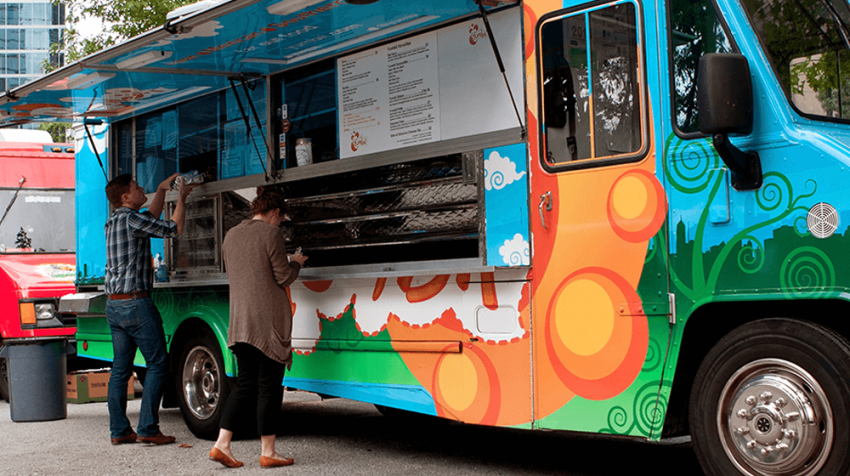 Hip food trucks started hitting the scene in the trendiest cities over a decade ago, breathing new life into the old concept of the sandwich cart. Fast forward to today and colorful trucks serving upscale cuisine are everywhere, even in the staidest suburbs and small towns.

Food trucks are a billion-dollar industry in the United States and have spawned their own reality TV shows. So it’s no surprise to see food truck franchises in the mix. If you are looking to get into a mobile restaurant of your own, buying a food truck franchise may be a way to get there with lower risk because you have the helping hand from a franchisor with a proven formula for success.

We have chosen 10 mobile food truck franchises from the industry to bring you the best list:

Riding the wave of the recent pizza cone trend is Kono Pizza. They franchise mobile units and kiosks, as well as brick and mortar restaurants. The menu is primarily pizza-based, with the popular pizza cone concept dominating with a variety of specialty fillings. Another selling point is that they don’t use frozen cheeses, low-quality proteins or cheap produce. The Kono Pizza mobile units include the fully equipped Food Truck which can move around a variety of locations. There is also the indoor or outdoor event Cart and the towable Concession Trailer.

The Captain D’s Seafood restaurant has also branched out its franchise options into mobile food trucks. Captain D’s has more than 500 locations around the United States with close to half of them owned by franchisees. They are especially popular in south-eastern states but are expanding nationally. Captain D’s is the pre-eminent seafood franchise in America and continues to make gains into the fast-casual food market.

Another food service business opportunity with a variety of food offerings is Johnny Rockets. They are an international restaurant chain with branches in over 30 countries. They focus on good old fashioned American favorites such as juicy beef burgers, classic sandwiches and crispy fries. Johnny Rockets also offers tasty hand-dipped shakes and malts for a real Americana experience.

The coffee industry keeps getting bigger and that is reflected in the global success of the Cafe2U mobile coffee franchise. Cafe2U became the first mobile coffee franchise in the USA in 2011 and has been successful all over the world. It is widely considered to be the best food truck franchise focused on coffee. Each franchisee receives a fully equipped Ford Transit Connect Commercial Van compliant with all required food safety and government regulations.

The van is fitted with an on-demand commercial coffee grinder and a commercial 2-group espresso coffee machine to deliver quality with every cup.

Also starting out in the States in 2011 was the mobile franchise of the Toppers Pizza pizzeria chain. The restaurant was founded in 1991 and started franchising in 1997. Since then they have consistently been ranked as one of the best franchises and pizzeria chains in the USA. Originally targeted at the late-night bar scene and college students, the customer demographic has diversified in recent years.

The Cousins Maine Lobster Food Truck was founded in 2012 by two cousins. They started with just one truck, but the unexpected high popularity of their food led them to franchise their business. They serve fresh lobster that can be enjoyed on the go. Their menu includes tacos, rolls, quesadillas and tots, all filled with fresh and flavorsome Maine lobster. Franchisees also have the option to offer a catering service.

Another one of the new franchise opportunities is the Grilled Cheese Truck, which specializes in serving hungry customers at all sorts of events. The idea came to the founders after one of them competed in the Annual Grilled Cheese Invitational. He saw many different kinds of food truck and franchises doing great business. He then thought his grilled cheese expertise might do some great business too, he was right!

For a boutique-style business with a specialty offering, consider a Gigi’s Cupcakes food truck franchise. They are a mobile bakery specializing in a variety of interesting and always delicious cupcakes. Part of their appeal to customers is the ever-changing menu, with new flavors and ingredient combinations to try every day. Large catering orders for special events are also possible with this franchise. However, each franchisee must undertake 120 hours of training before starting.

How Much Do Food Trucks Make a Year?

The average revenue generated per food truck in the USA is about $290,556. Total annual industry revenue is well over a billion dollars, increasing at a rate of 12.4% over the last five years.

How Can I Get Into the Food Truck Business?

You have two main options to get into food cart franchises. First, you can open your own new business from scratch. Read: How to Start a Food Truck Business.

The second option is to buy a franchise and there are many franchise opportunities. With franchises, you get a brand concept without having to think one up yourself. You also get recipes, marketing support, and systems that can make your business a success — with less trial and error.

Why Do Food Trucks Fail?

Food trucks can fail for the same reasons other restaurants fail, including poor sales, unprofitability and health department issues.

There’s another reason: running a mobile restaurant is hard work. Sauca was once a high-flying mobile food enterprise, but then the business shut down. The owner said it was a lifestyle decision, citing his desire to no longer work 7 days a week, 14 hours a day. He had a fleet of vehicles and brick and mortar restaurants –a single food truck will not be as demanding. However, owner-operators must be on their feet and the hours are something to consider.