Small Business Adds Close to 1 Million Jobs from May to June, ADP Reports 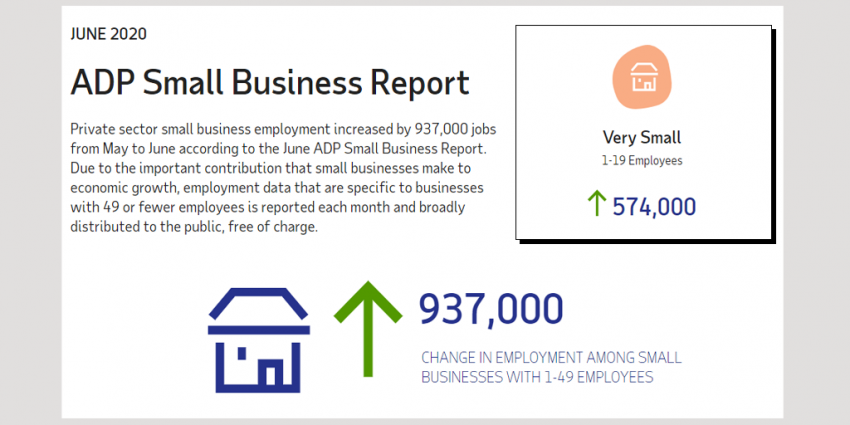 The latest jobs figures show small business in America bouncing back from the COVID-19 pandemic.

According to the June 2020 ADP Small Business Report, small businesses added 937,000 jobs to the American economy from May to June.

This is certainly good news for small business across the country. And it’s a stark contrast to this same report just 2 months ago.

In the June report, the most jobs gains came from the smallest businesses, those with 19 or less employees. Those companies added 574,000 jobs from May to June. Companies with slightly more employees added 363,000 jobs in that time.

The biggest jobs producers are in the service sector right now, ADP reports. Between May and June, those small businesses added 729,000 of the 937,000 new jobs. That’s nearly 78% of all the new jobs created by small business.

Goods-producing small businesses added the other 208,000 jobs in that time.

And in each sector, it was the smallest companies contributing the biggest gains. Very small service businesses added 438,000 jobs. And the small goods producers added another 136,000.

“Small business hiring picked up in the month of June,” says Ahu Yildirmaz, vice president and co-head of the ADP Research Institute. “As the economy slowly continues to recover, we are seeing a significant rebound in industries that once experienced the greatest job losses. In fact, 70 percent of the jobs added this month were in the leisure and hospitality, trade and construction industries.”

In ADP’s National Franchise Report, jobs gains among those businesses weren’t as robust as they were among small businesses. However, the jobs numbers continued to trend upward.

ADP says franchise businesses, between May and June, added 4,500 jobs to the economy.

The largest gains came from auto parts and dealers as well as restaurants.