The Best Ways to Use Tablets in Business (INFOGRAPHIC) 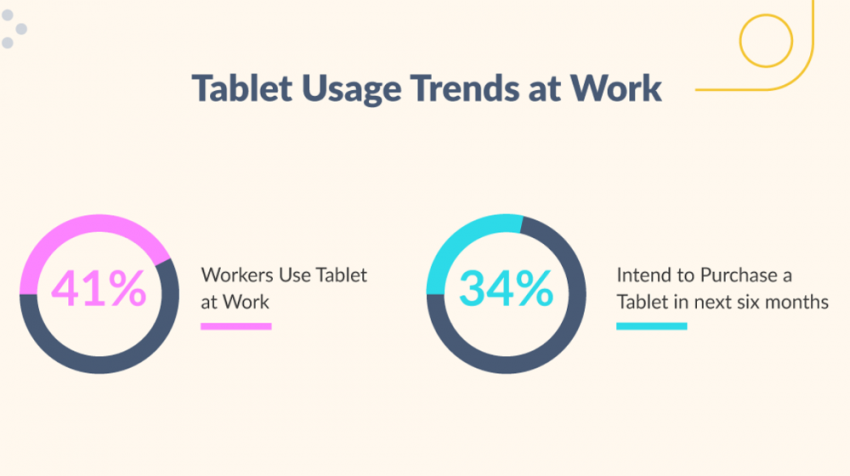 Several years ago, it seemed like tablets would be in the hands of every office employee. Then tablet sales began to drop. But if you think we’ve seen the end of tablets in the workplace, think again.

According to recent findings, more than 40 percent of employees still use tablets for work. And there are certain tasks that are well suited for this type of device. For those who use tablets or might consider it going forward, here’s a guide.

According to an infographic from ScaleFusion, 41 percent of workers use tablets for their jobs. And 34 percent plan to purchase a tablet in the next six months. They’re most common in France, the U.K., Brazil, Germany, and Australia. So rates for U.S. companies may be lower. But those who do business internationally should be aware of these trends.

So what are businesses mainly using tablets for? According to the infographic, some of the top tasks include:

More specifically, 77 percent of respondents said they spend their tablet time using apps. So these tools aren’t generally used for things like documents or traditional internet browsing. But mobile apps have gotten significantly more sophisticated in recent years. So certain tasks, like social media management, may simply be easier on mobile interfaces. And employees who use these apps personally anyway may be more efficient using tools they’re used to.

If you’re thinking about what tasks can be efficiently done with tablets, consider if they can be done through apps. If they require more sophisticated software, it may not be a good fit. But if there’s a user friendly mobile app out there, a tablet could actually improve efficiency.

When to Choose a Tablet for Work

Of course, a tablet isn’t right for every situation. Employees who deal with lots of documents or sophisticated software should probably use a computer. However, tablets can be beneficial in the following instances:

Additionally, plenty of teams could utilize both computers and tablets. You may have employees who work on some documents but also travel frequently. Tablets tend to be fairly affordable, at least compared to computers and laptops. So investing in them could help you increase productivity in certain instances. And if you can utilize them instead of computers for certain employees, you’ll likely save money.

Other Considerations for Business Tablet Usage

The ScaleFusion Infographic also notes some challenges that go with using tablets for work. First, there’s the potential for data misuse and wireless access. Then there are potential security threats from using unsecured networks. Some companies may also find it tough to manage various allocated devices.

Mobile device management platforms like ScaleFusion are designed to help with some of these issues. Basically, businesses should be prepared to manage tablets in the same way they manage computers. You need to provide secure networks and track usage to make the most of these tools.

See the full infographic from ScaleFusion below.

[Infographic] How to Use Tablets in Business?