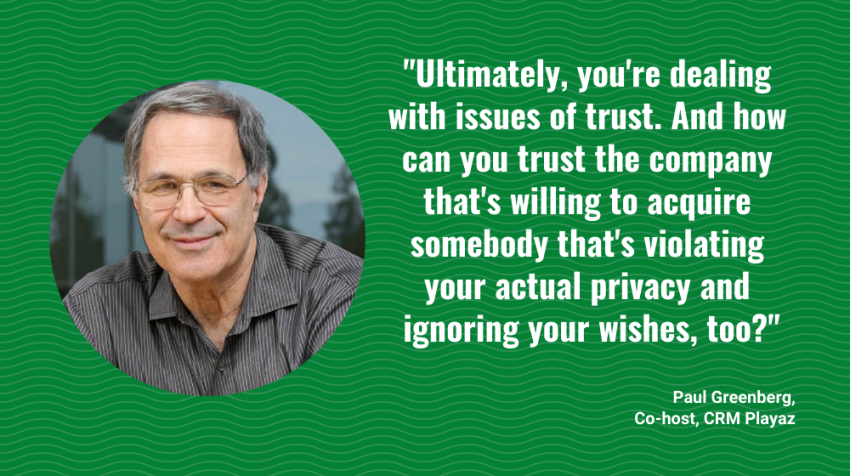 The CRM Playaz are not going to buy TikTok. Let me explain why.

Last week Microsoft made it known publicly that it was interested in acquiring a stake in TikTok, a wildly popular video sharing platform that has been in the news a lot lately.

But the Microsoft news seemed to set off a bunch of reports that other companies were also interested in, including Apple and Twitter.

In fact, so many TikTok acquisition stories started cropping up my CRM Playaz co-host Paul Greenberg and I started exploring whether we should put a bid together … OK I was just kidding on that one.

But with all the TikTok acquisition talk going on, the Wall Street Journal published a report this week that found TikTok “skirted a privacy safeguard in Google’s Android operating system to collect unique identifiers from millions of mobile devices”.

Given this news and the obvious repercussions it has for data privacy, what does this say about the dedication to customer experience if any company decides to buy TikTok knowing all of this?  It’s an internal conversation big companies are having.

With 800 million active daily users TikTok is creating a level of stickiness and engagement most companies crave, but are the black hat tactics with user data allegedly being performed worth the potential legal issues?  And more importantly is it worth losing the trust you’ve built up with your customer base?

Paul and I took that up for the latest CRM Playaz ep, and all I can say is after talking about it we’ve decided to withdraw our non-offer to buy TikTok. But does that mean anybody else should?  Below is an edited transcript of our conversation. Click on the embedded SoundCloud player to hear the full conversation.

Brent Leary: Do you think Microsoft is still as interested in buying TikTok?

Paul Greenberg: Well, let’s say this, I think they are more cautious. I don’t think they’re dropping the idea because ultimately, there has to be some resolution of that. I don’t know what the tactic was that they used. I didn’t read the article. But look, ultimately, anytime there’s a potential legal issue of substance involved, which would potentially impact the operations of the potential acquisition, if I’m the company, I go on hold until that solved. And so, if I’m Microsoft, whether they are holding back or not at the moment, I would, and wait until… Again, I don’t know what the issue is, and I don’t know how easy it is to resolve. I haven’t a clue. But when you get that kind of public uh-oh, then you say uh-oh yourself and step back.

Brent Leary: It said that “the tactic, which experts in mobile-phone security said was concealed through an unusual added layer of encryption, appears to have violated Google policies. The identifiers collected by TikTok, called MAC addresses, are most commonly used for advertising purposes. The White House has said it was worried that user data could be obtained by the Chinese government and used to build detailed dossiers on individuals for black mail or espionage.”

Paul Greenberg: What? So-

Brent Leary: So I don’t think I want to touch that at this point, but does Microsoft need to touch… Why would they… I [crosstalk 00:02:11]-

Paul Greenberg: Look, TikTok to me is still just a phenomenon. It’s not… there’s so many of those. The thing is, in the longterm, if it ends up like Instagram, yeah, then there may be a good reason to buy it, even though maybe out of their price range by that time. At this point to me, it’s a phenomenon that’s been really, really pushed forward by the pandemic. But it’s like the QBs and these short… what was that one that would disappear after a…? Snapchat, right?

Brent Leary: Oh right, after 12 seconds or something.

Paul Greenberg: Snapchat’s around, but it’s no longer a phenomenon because people are moving off to other things. And TikTok, at least for me at this moment, in its history, is like Snapchat early on, phenomenon that could go to absolutely nowhere potentially or settle into something less, or end up an Instagram. It’s just no telling where the thing is going and is no indicators. And nobody could convince me otherwise, that there’s some way of deciding its fate now.

So given that Microsoft would be pretty much required because of everything else, well, on the one hand, they may be required to pay an inflated price. On the other hand, they may be able to get it for almost nothing, if it’s going to actually be banned by the government, otherwise. So TikTok ownership might want to sell, not fire sale, but cheaper than they ordinarily would have. But does Microsoft need it? God, no.

Brent Leary: Yeah. I highlighted the exact action, it says Tik Tok, “skirted a privacy safeguard in Android’s operating systems to collect unique identifiers from millions of mobile devices, data that allows the app to track users online without allowing them to opt out.”

Paul Greenberg: Well ultimately, you’re dealing with issues of trust always. And how can you trust the company that’s willing to acquire somebody that’s violating your actual privacy and actually, ignoring your wishes too?

Paul Greenberg: You’re probably not going to do well with something like that. And when it boils down to it, what TikTok does isn’t all that amazing either.

Brent Leary: This is not just, oh, we made a mistake. This is, oh, we got caught being devious about what we’re wanting to do with that data. That’s a whole other ball game for me.

Paul Greenberg: Yeah. I don’t know. Microsoft, forget it, okay? Do me a favor.

Brent Leary: Yes and we will do the same. We are going to remove our offer…