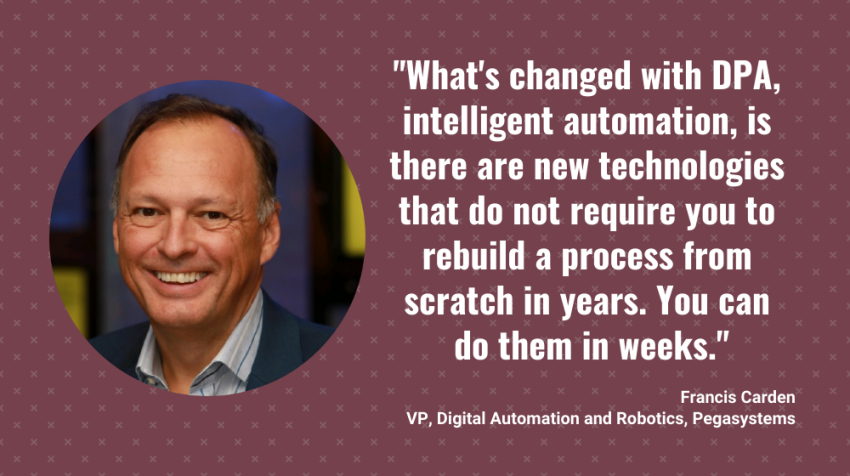 But what exactly is it? And where does it fit in when it comes to helping companies with their digital transformation efforts?

Interview with Francis Carden of Pega on Robotics Process Automation

These are big questions I was able to ask during a recent LinkedIn Live conversation I had with Francis Carden, Vice President of Digital Automation and Robotics for Pega – a leading customer engagement and process automation platform provider.

Below is an edited transcript from a portion of our conversation.  Click on the embedded SoundCloud player to hear the full conversation.

Francis Carden: RPA stands for robotic process automation, and about a million things underneath it, dependent upon who you speak to. To me, it primarily started life as automating applications that run typically on Windows machines on desktops, and sometimes you could automate them a hundred percent and move those desktops to a VM, and they all run by themselves in a locked cupboard, right, properly governed and secured, hopefully. And then Attended RPA was basically, you put it on the desktop and it would automate alongside a human, so you could improve the human’s performance by 20 to 40 to 50%. But if you get to a hundred percent, you don’t need the human, so you would move it to the server room and [inaudible 00:00:39].

But, predominantly, to me, what it started out as, it’s morphed into some very different things, not necessarily rightly. But RPA was predominantly automating someone else’s user interface, the keyboard, the mouse, the screen, because it doesn’t change a process, it just automates the as-is process. And then, of course, it got, “Throw some AI at it.” That suddenly makes it uniquely different. Or, “Throw some API integration in it.”

But then, to me, those things aren’t really RPA. If you’re automating a UI, you’re basically saying, ” the old processes are fine.” No, they’re not, right? You just keeping them alive for longer. You’re adding to debt, right? I think one of the analysts calls it a tax on legacy. It’s so true.

And so, for the years I’ve told very successful, large implementations of RPA, I never turned around to anybody and said, “Oh, it’s transformation,” or “It’s going to change your life. It’s going to change the way you do business.” No, it’s an operational improvement benefit.

You’ve got intelligent automation, which is a myriad of technologies, which includes RPA, and RPA typically should be used as a bridge to transform your business. Because any business that’s not transforming and just band-aiding stuff together with RPA is not going to be competitive a year or two or three from now, right? Because they’re peers are truly transforming their businesses and don’t need RPA or very little of it. And that’s got to be ultimately the goal. Nobody really wants screen scraping, right?

Francis Carden:  I like to take a step back and think about work, right? Work that a human does at the desktop,  that’s really what we’re focused on because we’re not talking about necessarily APIs and the other stuff that’s done. We can talk about that later because it’s of this, but predominantly RPA or the work that gets done by a human, there’s a start point. It might be a mortgage loan application. It might be a call because they’re complaining that their network keeps coming down, or their mobile phone keeps breaking, whatever it might be. A call comes in, and then ultimately there’s an outcome. And then if all you do is automate the existing way you solve that outcome, all the underlying debt stays around this. It’s not a digital process.

Intelligent automation says let’s rethink how we want that outcome to occur. We want it to happen faster. We want it to reach out to the customer before they call us. All of those things start to really evolve if you think about it intelligently. Automating a process is not about automating the as is, but automating almost the want to be. Where would you like as a business, that process? If you was to start a new company today, you don’t go out and buy 6,000 legacy systems and use RPA to turn yourself into a digital business. You typically build, or you buy some technologies, and you build a digital business. And so you are intelligently automated from the ground up. And RPA is basically trying to not intelligently automate you from the top down.

And so it’s a matter of using the right technologies, and what’s put people off in the past from being able to digitally transform a process, is some things are just hard to do. And so, technically, you might get such a roadblock, you might as well just use RPA. But what we believe is you can automate much of the process using intelligent automation, whether that’s low-code or whether that’s design thinking to reengineer a process or case management, and then use RPA to plug the gaps that would’ve prevented you getting further along the digital transformation story. And then think about replacing those RPA bots. We’ve got customers that build bots only if there’s an end of life strategy for them, right? I mean, that’s very forward thinking and very creative and very right, right?

Small Business Trends: RPAs, they’re great for, like you said, automating routine kind of mundane tasks. And if the processes that are making up those routine automated, I mean, those routine tasks are bad processes, like you said, it just speeds up the failure and makes the failure more consistent in achieving, as long as you run those processes. But when it comes to actual transformation, that’s in intelligence. That’s where, I guess, the umbrella of DPAs come in.

Francis Carden: We both lived in this world for a long time. To automate a process properly, i.e., to rethink it, reimagine it, everybody thinks that’s a big ticket item. It’s going to take many, many years. BPM [phonetic 00:05:43] was known as it’s going to take forever, right? It’s like ERP. I mean, that’s the worst one, but everybody thought that [inaudible 00:05:49]. I’ll implement an ERP system in six months, so we digitize the process in three.

But what’s changed, DPA, intelligent automation, is that there are new technologies that do not require you to rebuild a process from scratch in years. You can do them in weeks. We’ve got customers rebuilding processes properly in days and weeks. And that may or may not include RPA. Often, it does not, but it’s there if you need it. But if you think about an RPA vendor that’s raised all this money, they have to push RPA. That’s their license revenue.

See Also: How The Automation Wave Will Help Small Business

Now, what they’ve done is they’ve said, “Well, let’s add some intelligence to RPA. Let’s add OCR and some AI around document readings, and let’s add some API integration.” It’s like, “Well, that’s then not RPA. That’s the stuff we’ve always had, maybe done better than before. Give everybody that.” But I do not believe a digital transformation platform should be built on screen scraping. No enterprise, no CTO I’ve ever met says, “Yeah, yeah. We’re going to go and buy a screen scraping platform [inaudible 00:07:04] an RPA platform to digitally transform my business.” It doesn’t happen.

And so low-code, to me, is the movement, and underpinning low-code is that citizen developers and IT can collaborate together to look at a process and say, “How can we improve this process dramatically?” Right? Almost throwing away the existing and just say, “Well, imagine that we were allowed to dream, and this is what my perfect process would look like.” And then a few buttons later you’ve actually said, “Well, we can start to do that in these days and weeks, instead of these years.” And that’s what we’re seeing. It’s almost a competition. It’s almost now cheaper to build a new process than it is to use RPA to plug the old one because if you take into account the cost of bot maintenance, if you take into account the cost of maintaining those legacy systems and the infrastructure required to do it, and IT and QA and everything else, but if you take a step back and say, well, again, to my point earlier, you lose a new digital business. Don’t buy those legacy systems, but you managed to build a digital business, so that they say never the twain shall meet, but that twain’s meeting now, right?

You are literally seeing companies… And we saw it through COVID as well. We saw lots of RPA vendors going out there building some bots, which kudos to everybody who contributed to helping through this pandemic. But we also saw a massive number of companies with Pega building applications from scratch in days, like loan applications in days. Instead of our band-aiding an existing loan application with RPA, we were actually building brand new loan applications where banks could put those online so that people could apply for loan. The loan be processed. And when you talk about building an application in a week or two, people don’t believe you, but it’s true now. That’s DPA or intelligent automation.

Small Business Trends: So do you see companies looking to do digital transformation starting with RPA thinking they are doing intelligent automation?

Francis Carden: So, intelligent automation, you can start with it and use RPA, or you could use RPA and come back to it later. But every one of our clients, whether they’re with successful with RPA or not, needs intelligent automation. And that’s the depth and breadth of DPA, or as Gartner calling it hyper-automation. I think HFS called it intelligent process or measure, whatever the acronym, it’s about doing it right now. And the time is now when we’ve got to automate these processes correctly. And that is the conundrum. The word automate implies automating something as is. Why does the word automate count to building something new, kind of is an oxymoron. You’re not automating it, right?

And I think of computerization as the automation of the way things were done manually, and RPA is just automating computerization. It’s still the way things were built to do, what used to be done manually. Digital transformation or intelligent automation is about automating the way to do it properly. Now you can. You couldn’t do it that way 10 years ago. The technology was too hard, right? Big projects. Now you can build things in days and weeks and months that used to take years, and it’s transforming the game for the entire industry in every sector.