Franchise vs Corporate: The Difference 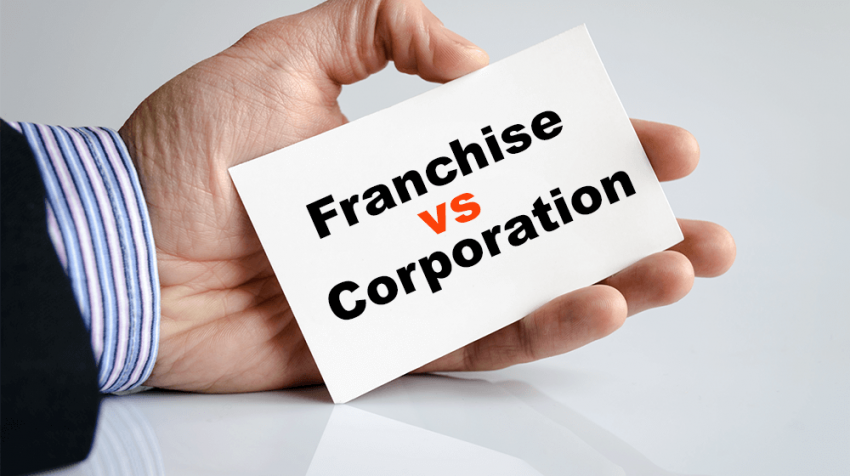 Whether businesses are a franchise or corporation is a definition that can be traced back to their origins.

Originally someone owned a successful business or parent company. That person wanted the business to grow and had to decide the best way to do it.

Most of us aren’t used to making a distinction between the two. We may think of a restaurant as a chain, but it’s actually a franchise, and visa versa. Whether it’s a chain vs franchise depends on how it is owned.

Which type of business is best for you? That’s an individual decision, based on your personality and management style.

Running a company store or becoming a franchisee can be an important step in your business career. Doing so can help you learn the ropes of successful management, and prepare you to launch an entity of your own.

You’ll need some information to help steer you to make the right choice:

A franchise is a business purchased from a franchisor. The franchisee pays a fee to own and operate the business using a business model. There are upfront costs such as the purchase of real estate and inventory and the franchise fee.

Often a successful business became a franchise because going that route allowed the original owner to hang on to capital and raise money for expansion. Each time someone purchased a franchise, a franchise fee was paid. In addition, the franchisee usually paid royalties on income as well. Bringing in this income allowed the franchisor to quickly grow the company. The franchisor carefully screened applicants, allowing the use of the business’s name and operating model to worthy applicants.

Corporate growth typically happened at a slower rate. The parent company had to leverage funds to cover opening and staffing the new business. As a parent company, the corporation was responsible for all profit and loss, all business decisions and quality control.

What are the differences between franchises and corporate businesses?

Now you’ve got the major structural difference. From that first successful business, “clone” businesses are opened. Those clone businesses are either owned by the corporation, or by franchisees.

Franchise vs Corporation, what are the major components of each?

Related to the difference in ownership are differences in how the businesses operate. If it’s a franchise, the owner of the franchise runs the business. The franchise owner is responsible for staffing, day-to-day operations and quality control.

If it’s a company store that means it is corporate-owned. A manager or managers and employees are hired to staff the store. The corporation is responsible for operations, profit and loss, business decisions and quality control.

What is a chain business?

A chain business is a corporate-owned store. In this case, the parent companies are responsible for operations.

It can be confusing and seem like splitting hairs. How does a chain business differ from a franchise?

What is a corporate store?

If someone is a manager or employee at a corporate store, and they violate the terms of their employment, they are fired. Although firings can be the source of a lawsuit, a “wrongful termination” lawsuit is as a rule more straightforward than lawsuits involving franchise operations.

The contract between the franchisor and franchisee is very detailed and specific, and typically very lengthy. Although the Small Business Administration is a great source to use for questions about terms in a franchise contract, the best advice is to hire a lawyer who is familiar with franchise contracts and law.

If there’s a disagreement between a franchisor and the franchisee, the dust-up will usually end up in federal court. That’s because federal judges are more familiar with franchise law.

What are the types of lawsuits that involve franchises?

Yikes! In addition to contract issues, there can be issues related to general operations. Did someone slip and fall on the front sidewalk or did one of the employees make an inappropriate remark to a customer? Did a customer find some non-food object in their food or did a customer get food poisoning?

Having a qualified attorney review the terms of a franchise contract, as well as a franchise disclosure document, is the most important part of your research into purchasing a franchise.

Which Is Right for You, Corporate vs Franchise?

Are you someone who likes to make changes, try new things to see if they are profitable, break from the norm and think out of the box? Well, probably neither business model, corporate store or franchise, is the best fit for you.

When you’re weighing the pros and cons, corporation vs franchise, here are key points to consider, Pros and Cons:

In the franchising industry, you are purchasing a proven business model. The franchise will come with a proven business plan. You’ll be responsible for overseeing inventory and purchasing (although with fixed suppliers), and also hiring and firing. With your franchise fee and initial investment, you’re getting the use of a known business name, along with the right to use it. After paying royalty fees, the profit you earn is your own.

Being responsible for hiring and firing can be a real Con, especially in certain types of franchise industries such as restaurants. If you’re operating a franchise where employee turnover is high, or seasonal, you’ll find that keeping the business fully staffed takes up a lot of your time.

Owned stores come with specific rules, but that can be a Pro. Hiring and firing? Out of your hands. Profit and loss? Contracts for suppliers? In the owned stores model, that’s handled at the corporate level. If you’re considering certain industries, such as food, drug, shoe and women’s clothing, know that these types of companies are most common to be corporate-owned.

Corporate-owned stores, as with franchising, include rights such as being able to use a business name and a business model. But business owners in the two companies have different rights.

For example, in franchising, the owners have rights such as hiring and firing employees, be involved in contracts with suppliers and manage daily operations. Comparing franchising to corporate-owned, and the management freedom tightens. In a company store, the original company controls and oversees all operations, even contracts for supplies. The corporation handles the management decisions, including hiring and firing of employees.