Mike Katz of T-Mobile: The kinds of capabilities that 5G promises to present can be transformational 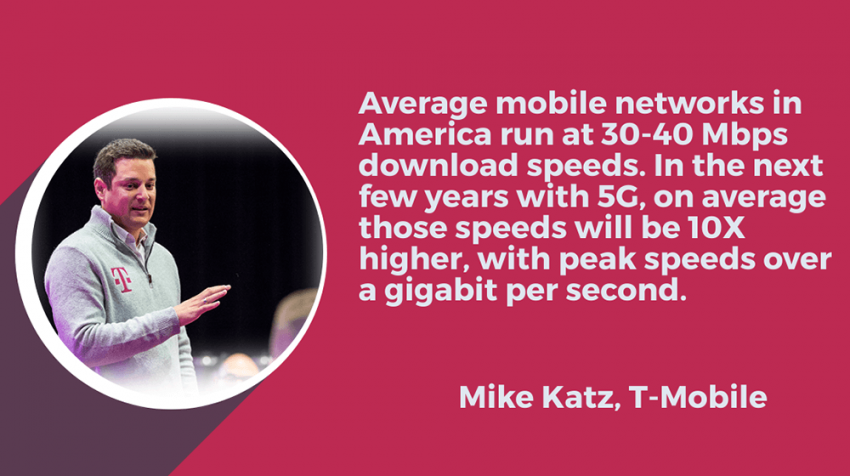 In addition to filling us in on the new offerings and the Microsoft partnership, Mike also shared how small businesses are using mobile and cloud technologies – and their own creativity and innovation – to transform their businesses to meet the changing needs of their customers.  Mike also shares how 5G broadband wireless technology holds the promise of being a game changer to those businesses from a variety of perspectives.

Interview with Mike Katz of T-Mobile

Below is an edited transcript of our conversation.  To hear the full interview click on the embedded SoundCloud player.

smallbiztrends · Mike Katz of T-Mobile: The kinds of capabilities that 5G promises to present can be transformational

Small Business Trends: In your press release announcing the Microsoft partnership, T-Mobile said that this National Small Business Week was the most important one in a decade.  Can you tell us why you feel that way?

Mike Katz: Yeah. It’s a great question. This has been, maybe to put it mildly, a challenging year for all of us. Probably and hopefully, cross your fingers, this is the one time in our lifetimes where simultaneously all of us, everyone in the entire world, is going through the same thing together, and it’s been hard and it’s been stressful, and there’s not a single one of us who haven’t had some impact on our lives. But if you think about how this pandemic has affected small businesses, you can make a strong argument that they’ve been disproportionately impacted, especially if you go back to spring when many of us across the country were in full shutdowns, small businesses rarely can afford to keep the doors closed for a day, let alone weeks or months on end.

Small Business Trends: Let’s talk a little bit about what small business means to T-Mobile, and then we’ll get into all the other cool things.

Small Business Trends: Since it is coming up on National Small Business Week, and you just explained the importance of small business to the T-Mobile, let’s talk about this partnership that you just announced with Microsoft.

Mike Katz: We’re really thrilled about this one because, like we were just talking about, it’s been a rough year for small businesses, and small businesses oftentimes are the underdog. They’re depending on the business and the industry they’re in. They could be fighting, some of the biggest companies in the world are competing, maybe not fighting, but competing with some of the biggest companies in the world, and oftentimes don’t have access to the same kinds of resources. Many small businesses that we work with, they don’t have big IT departments and they don’t have their own help desk that’s helping the people that work there with all their different technology needs. And one of the things that we’ve really tried to do with small businesses is keep what we do as simple as possible, because business owners of all sizes, but particularly small businesses, they’ve got more stuff to worry about than dealing with their wireless company.

What we’ve done with Microsoft is we’ve enabled every small business that does business with us the ability to get access to free Microsoft 365 licenses. Small businesses can take advantage of all of the suite of applications that Microsoft 365 has within its suite, Excel, PowerPoint, the kinds of productivity tools that many businesses rely on to run their day to day operations, but also some other great features like cloud storage that enables document sharing and storage of documents. We’re really, really excited. We think this is going to be something that small businesses feel like is really helpful to them, both in their productivity, but also in their cost management.

Mike Katz: There’s some things that we’ve heard that have been consistent, and the feedback also has evolved over the course of the pandemic. I think in the early days, weeks and months of the pandemic, it really was… I don’t have a better way to put it, it was triage. It was, hey look, our operation is shut down. We have no revenue coming in and we need to figure out ways to pay the bills and keep our employees, whenever possible, safe, secure, and employed. And that was one of the things that I was just blown away with, with some of the small businesses that we worked with, which was how much of their efforts, particularly early in the pandemic, were about ways that they could keep themselves focused on making sure they didn’t have lay people off, many of these small businesses are family run operations, their employees either are family or treated like family, and they wanted to find ways to make sure that they weren’t the cause of a negative impact to the people that work for them.

I think in the early days of the pandemic, it really was about how can we ensure that we can prioritize the things that are the most critical for us and really limit spend where we can. We got a lot of feedback from customers about, was there ways to either defer their bill? Could they limit the amount of services that they were buying from us? Maybe there was customers that were buying fully unlimited services from us, but they recognized that business was going to be either completely shut down or slowed down for a while, so they wanted to adjust services accordingly, which then consequently saved them money. It was a lot of that kind of, I’ll call it, optimization or shifting around services to help them meet their short-term financial objectives, but also to right size relative to what was going on in their business.

Then I think as the pandemic became our normal, we got a lot of feedback around, how can we operate successfully in this new environment? I can tell you, it really spurred a huge wave of innovation. And you were just mentioning things like digital transformation, and how do you take a restaurant that’s completely brick and mortar and their business is stuffing people inside of a building and then stuffing them with food. How do you shift your business model to one that looks like that to one that can work in this environment now, where people have to stay socially distanced and safe? A lot of the conversations that we started having with customers were, how can we use mobile to facilitate some this new way that our business can operate?

We saw some really great examples. There’s a restaurant, I’m in Seattle, a restaurant here in Seattle called Canlis, which is like an institution restaurant in Seattle. Seattle is kind of a laid back city, you have the start of grunge music and stuff. It’s the only place in Seattle where you actually are required to wear a jacket when you dine. It was shut down March, April, completely shut down. And they went through a massive shift in their business model to go from a fine dining sit-down restaurant with professional waitstaff and chefs to one where they transformed their entire waitstaff into delivery drivers, and they equipped all of them with phones and tablets.

They created a mobile POS system that they could use to take orders, but they kept their entire waitstaff employed by turning them into delivery drivers and turned their entire business mobile. It’s been a great success story, both for them, but also for the local community, because they haven’t had to lay off a single person. They even took the piano player that plays inside the restaurant, and they created essentially like a podcast with him every week, so people can listen to a live piano music from the piano player at the restaurant. It’s just been incredible. There’s so many of those stories of innovation, of people that were in desperate times, who went through this incredible transformation to keep their businesses afloat and to keep their employees employed.

Small Business Trends: Where does 5G fit in and how do you think 5G can help, particularly in situations like we’re in today?

Mike Katz: Yeah. It’s a pretty exciting time in this industry, and obviously, we can geek out on this kind of stuff, because we live it every day, but we really are in the beginning stages of what I think will be one of the biggest technology transformations in wireless. I think that’s saying quite a bit, because if you think about wireless a decade ago, when the industry went from, if you remember, 3G into 4G, that was a huge transformation. That was that era of smartphones. 10 years ago, you never would have thought of pulling up an application and punching a button and having a stranger show up in a car. And you just think about all of the innovation and capabilities and reliance that people now have on their smartphone as a result from the technology transformation from 3G services into 4G services, which really unleashed the power of smartphones.

This transformation from 4G into 5G has the potential to be even bigger. The kinds of capabilities that 5G promises to present really can be transformational. You’re talking about things like, today, the average mobile network in America runs at 30 to 40 megabits per second, download speeds. You’re talking about speeds, just in the next couple of years with 5G, that on average are 10 times higher than that, 300, 400 megabits per second with peak speeds over a gigabit per second. Mobile networks that have the same or better capabilities than what people are used to in their traditional fixed line, home or business broadband.

Network latency, one of the things that all of us who have been living on video conferences over the last few months recognize how important latency is on an internet connection, because how many times have you had these experiences where you’re in a meeting or even a one-on-one and everybody’s talking over each other. That’s really ineffective latency and how responsive your ISP is. You’re going to see dramatic decreases in latency with 5G, and I think that will really improve current experiences, like the one that we’re having right now, but it also is going to, I think, be a catalyst for the invention of a whole bunch of new experiences.

You hear all these buzzy things about virtual reality and augmented reality, but those things become a real possibility with a high capacity, high bandwidth, low latency network, where you can have experiences in a virtual or augmented environment that feel natural, because they don’t carry the latency. I think there’s a lot of ingredients for big transformation. I think the near term thing, especially for small businesses that’s going to be interesting, is the displacement of traditional either IT services or traditional services that were delivered exclusively through fixed wired providers that can now come through the wireless network.