Ideal for business owners, managers, and leaders who are looking for guidance on how to prevent problems rather than just solving them. 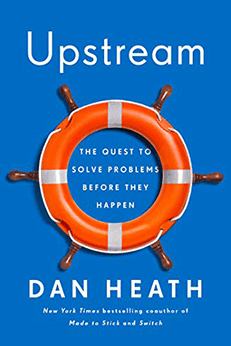 Are you sick and tired of reacting to problems?  You start each day with lofty goals only to be sidetracked by one fire after another.  If you’re ready to stop the madness and prevent those problems from robbing you of your time and sanity, grab yourself a copy of  Upstream: The Quest to Solve Problems Before They Happen by Dan Heath.

A few days ago, I received a promotional email from Dan Heath promoting this new book and I immediately requested a review copy.  It showed up two days later, and I read it over the weekend.  Yeah.  It’s that good.

Like preceding books written by the Heath brothers, Upstream takes on a common principle or topic and shines a light on it in such a way that makes you see it in a whole new light.

Along with his brother Chip, Dan Heath has written four New York Times Bestselling Books; Made to Stick, Switch, Decisive, and The Power of Moments.  Heath is a senior fellow at Duke University’s CASE Center, which supports entrepreneurs fighting for social good.

While he’s listed as the sole author of Upstream, he credits his brother, Chip, for his significant contributions.

And this is where it gets interesting.

Upstream Is a Delightful Roller-Coaster Ride

Heath starts the book with a parable that perfectly illustrates the premise of Upstream.

You and a friend are picnicking at the side of a river when you see a child drowning.  Without thinking you run in and rescue the drowning child.  But soon another child is drowning and your friend jumps in to save them. This process repeats itself several times when you notice your friend comes out of the water. “Where are you going?” you ask. Your friend answers “I’m going upstream to tackle the guy who’s drowning all these kids!” (A public health parable attributed to Irving Zola)

Without skipping a beat, Heath introduces the first of many real-life examples of people at all levels of organizations who recognize a problem and more importantly, decide that this problem is entirely avoidable.

In fact, the entire book flows from one story to another. Some examples are simple, personal upstream problem-solving examples like installing a timer on a light to make sure that it shuts off. Followed by insanely frustrating stories of nurses in hospitals who are so busy coming up with creative problem work-a-rounds that they don’t have the time to think about “Upstream” prevention strategies.

As a reader, I went from hopeful to hopeless and back to hopeful again about every three pages. Granted, reading Upstream isn’t quite like watching sports or the news, but I found myself doing everything from giggling to rolling my eyes and sometimes even shouting at the book.

This isn’t often said about business books, but I’d love to see Upstream turned into a documentary.  It’s just that riveting and entertaining.

So, let’s take a look at how Heath was able to generate this kind of reader engagement.

Because neither problem-solving nor problem-prevention are anything new, Heath had to find a way to make these broad topics intriguing enough and relevant enough for us to stop and take notice.

He does this by using the stories he’s collected from 300 interviews that clearly illustrate real problems, the obstacles and challenges people faced in trying to understand the problem and the brave choices they made to shift their thinking “upstream” toward improving or eliminating the issue completely.

The book is divided into three main sections. The first section covers the three barriers to upstream thinking; the inability to recognize the problem, a lack of problem ownership, and finally the tendency for scarcity to drive short term problem-solving instead of problem prevention.

The second section is the meat of the book and addresses the key questions you have to address in order to recognize the problem, change the system, and ultimately reap the benefits.

Each of Heath’s questions assumes that you understand and have overcome the three barriers to upstream thinking.

Finally, the third section shifts the conversation from what others have done to what you could possibly do.

As entrepreneurs, we believe in controlling our lives, our time, and our success. Upstream thinking is all about control.  As you go through the book, you’ll find many examples of simple upstream thinking that you’ll be able to implement at that very moment. This will motivate and inspire you to think about the next level of upstream projects that you can tackle.

This year has laid bare so many “problems” that have touched each of us in a personal way.  The daily challenges of life may feel insurmountable to you.  And, if that describes how you’ve been feeling, reading Upstream will give you solace and hope.