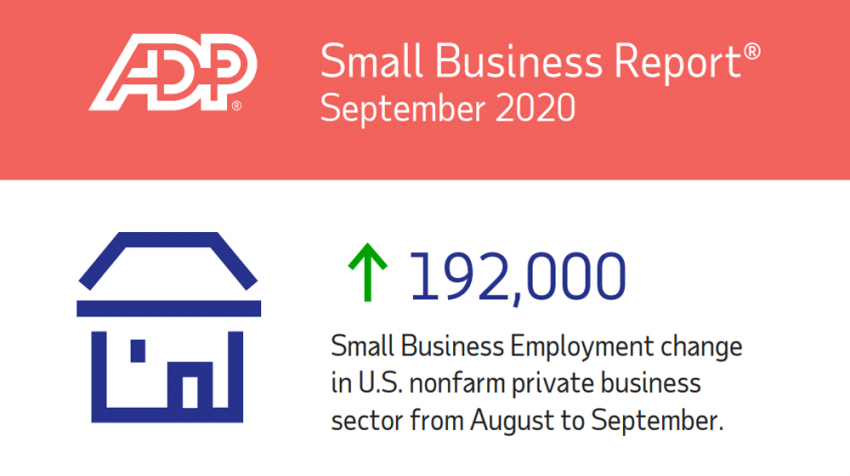 The economic recovery continues and small businesses are definitely part of it.

According to the September ADP Small Business Report, companies with 49 or fewer employees added 192,000 jobs from August to September.

While this number is down considerably from June, when small businesses added nearly a million jobs in a single month, it’s still a strong total and shows that the economic recovery from the COVID pandemic is still well underway.

And seeing numbers like this trending upward are a relief considering that at the beginning of the COVID pandemic, small businesses lost 6 million jobs in a single month.

“The labor market continues to recover gradually. In September, the majority of sectors and company sizes experienced gains with trade, transportation and utilities; and manufacturing leading the way. However, small businesses continued to demonstrate slower growth,” says Ahu Yildirmaz, vice president and co-head of the ADP Research Institute.

Job growth was noted in all the sectors included in ADP’s monthly reports.

Job growth among franchise businesses was a little more modest between August and September. But again, job growth after the year many American businesses experienced is welcome news.

ADP’s National Franchise Report shows franchise companies added 20,700 jobs. Most of those jobs were among auto parts and dealer franchises. They added 13,800 of the news jobs between August and September. Franchise restaurants added 6,400 jobs and accommodations franchises added 3,100 jobs. Those figures are particularly uplifting as those are two business sectors hit particularly hard by the pandemic response across the country.

The ADP National Employment Report also shows some really positive signs. Across the country, from August to September, 749,000 jobs were added to the economy, including the 192,000 from small businesses.