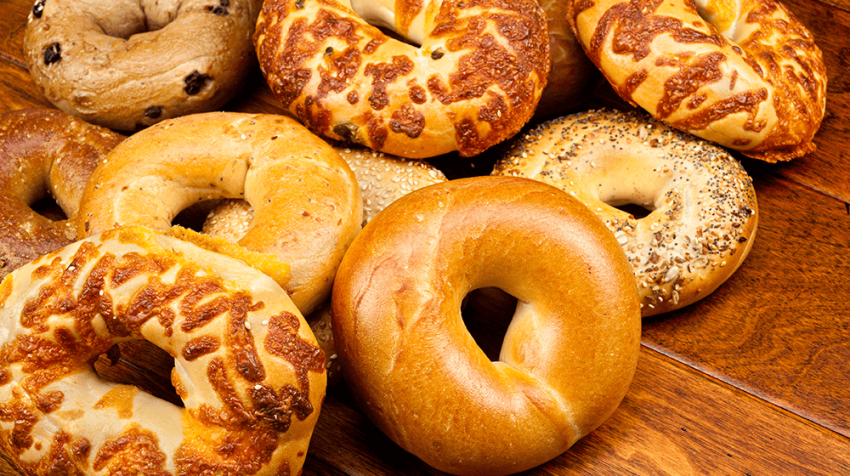 Bagels have a long history in the United States. They’ve been around since the late 19th century when Eastern European immigrants arrived in New York City. Today, it’s a multibillion-dollar industry.

New York City remains the bagel capital of the country. The majority of franchise opportunities started in New York before spreading to other states. The food franchises are well known by both locals and visitors.

As an industry category, bagel franchises are often lumped in with donut franchises but for purposes of the list below, we separated them.

Here are the best bagel franchise businesses for aspiring entrepreneurs to consider:

The Einstein Bros. Bagels franchise may be the largest, with more than 300 franchises in 27 states. The Einstein Bagel franchise also includes made-to-order sandwiches and extravagant desserts.

As with others in the bagel business. specialty coffee is a mainstay of the menu. Einstein’s is called Darn Good Coffee (because it is). Einstein also offers catering.

This food franchise is looking to expand. The franchise fee is $35,000.

Manhattan has been offering franchise opportunities since 1987. The franchise fee is $25,000.

No mention of Big Apple Bagels is complete with the inclusion of My Favorite Muffin, which is part of the menu offerings. Big Apple keeps the food franchise offerings varied with specialty sandwiches and salads.

Compliment any menu choice with the Big Apple signature Brewster’s brand coffee. The franchise fee is $25,000.

Since 1995, the NYC Bagel and Sandwich Shop has been offering franchise opportunities in the New York and New Jersey areas.

The signature touch of the NYC Bagel and Sandwich Shop business is in the preparation. The bagels are made, then left to ferment for 12 hours. After the 12 hours have passed, the bagel is boiled.

A NYC Bagel and Sandwich Shop franchise opportunity is available in those base states, and the business is likely to expand. As many of the franchises do – and it’s obvious in the name – the fare includes a sandwich shop.

The NYC Bagel and Sandwich Shop franchise fee is $29,500.

You may wonder – why is Water in the name of this business? That’s because the ingredients include special, proprietary water. Brooklyn Water Bagel uses an old-world recipe.

Shmagel’s is hugely popular with residents and visitors to Ocean City, Maryland. There are two Shmagel’s in Ocean City, and the company is seeking to expand.

Shmagel’s is advertising that the company is actively seeking to expand.

Between Rounds is a bakery cafe and bagel shop. The company launched in Connecticut in 1992.

How Much Does a Bagel Franchise Cost?

The franchise fee is typically from $25,000 to $35,000. Although that is affordable, the cost of the initial investment can range from $200,000 to $800,000. The investment includes brick and mortar, purchase of real estate and equipment, purchase of inventory and more.

The NYC Bagel and Sandwich Shop has one of the lowest startup costs at $120,000. But this is a base cost in the industry, with many other factors at play.

Are bagel shops for sale? Yes. There are business opportunities to purchase already-established franchises. For an additional investment, the franchisee may purchase a multi-unit business.

Franchisors require that an applicant have a significant net worth, typically from $500,000 to $800,000. Bagel franchises are plums in the franchise world, and franchisors want to make sure they are connecting with the best owners.

The best owners are the ones who already have proven their ability to make money. That is proven by their net worth. Although the start-up costs are high, the return on investment for that type of franchise is also high.

How much does a bagel shop make a year?

Let’s say you put up $300,000 in total cost including the franchise fee, to open the business. You should be able to make that back in two years.

BUT, it’s all about location. How can you make money selling a $2 product? That depends on the number of customers you sell it to, in a day, week, month and year. If you don’t open in a good location, simply put, you’re not going to make money.

From 2002 to 2016, revenues for coffee and snack shops doubled. Things were booming. The businesses that adapted to a changing market remained profitable. Those businesses offered Vegan, nut-free and gluten-free choices.

Why choose a bagel franchise?

There’s a whole lot to love about a bagel franchise.

For someone interested in buying a franchise in the restaurant industry, the bagel franchise offers a great place to start. Here are some reasons why:

The varieties are endless. Also endless are the opportunities for creative twists on the historic NYC bagel. The tasty doughy circle was everybody’s favorite quick, light meal. It wasn’t long before franchises like the NYC Bagel and Sandwich Shop took things to the next level. To the original tasty treat, they added sandwiches, specialty coffee, gourmet coffees, and more.