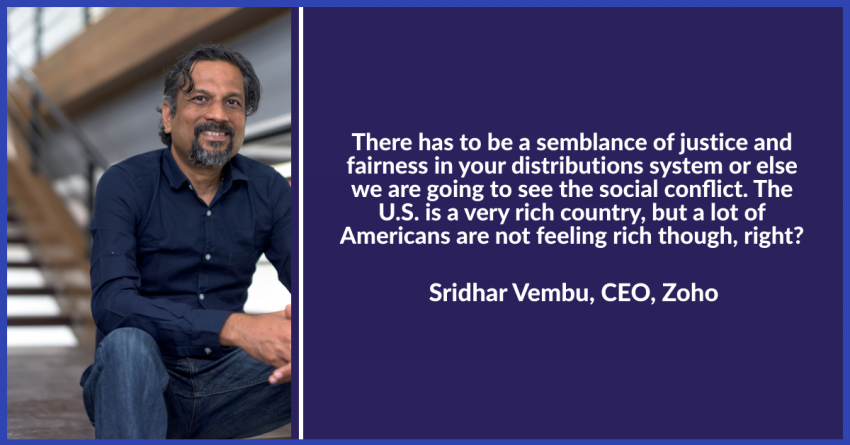 Earlier this week I cohosted a unique livestream event, alongside Small Business Trends publisher Anita Campbell, with Zoho CEO and cofounder Sridhar Vembu and Chief Evangelist Raju Vagesna.  It was unique because we spent the vast majority of the hour plus event talking about everything but what the company is mostly known for – cranking out 50+ business apps that 60 million people use on a daily basis.  It was also unique because it was the first time in about a decade that Sridhar and Raju sat down together (virtually in this case with Sridar being in India and Raju in Austin, TX) for a conversation like this.

The end result of this discussion demands that another decade not pass before another one of these conversations take place.  As bringing these two gentlemen together provided us a glimpse into what has made Zoho the success story it is, allowing us to go beyond the numbers to get a better understanding of the culture, strategy and heart of the company.  In this hour long conversation they talk about why it’s important for Zoho to be an asset to the communities they operate in, the concept of familiarity capital, the ills of “consumeritus”, and why spiritual economics is just as important as traditional approach to economics – and maybe more so.

Below is an edited transcript from a portion of our conversation.  To hear the full conversation click on the embedded SoundCloud or watch the video above.

Anita Campbell: How does a small business owner integrate that kind of commitment to the community together with the need to make payroll and pay the expenses and keep the business going. I mean, how do you balance that? Any suggestions or thoughts?

Sridhar Vembu: Yeah, in fact, it starts with your workforce. That’s where it starts, because before we think of the product, you first have to think about recruitment. You have to have a workforce. Where are we going to get the workforce? For a small business owner, this is the challenge because bigger companies have[resources]  – most of the people are going to work for prestigious companies and that’s common. So you have to figure out how are you going to hire that talent you want, and you need, and how do you get them with the skills you want? So the skill development is a first step I would advise any small business owner to focus on, and invest in your people. If there’s a couple of people who are trusting you with that at all, and coming to join you, think of that as not only that I’m trusting them, but they’re also trusting me.

So if you take responsibility for upgrading their skills, then you’re actually going to have somebody who is very skilled for your business too. They’re also going to have that because you’ve taught them, there’s going to be actually a loyalty factor that comes in. Hey, this person is investing in me. And that is how the community engagement begins. That is the way it actually began for us.

I actually encourage our employees to participate in community life actively. That’s something that I keep pushing. I say, your job here is enormously enhanced when you are active and participating in your to communities. We don’t want to lump Zoho into a community and be an island. We want to be very much part of the community. So that is the second part.

Raju Vegesna: The goal is to be an asset to the community; participating.  And the way you participate also varies by the region, by the company. The way you participate in India could be different from U.S., different from Mexico or Japan, and what that community needs and where the employees are interested in participating. All of those play that role. Nurturing that talent is the key. What percentage is that. Maybe lack of a better term, exploit versus nurture. Where are you just hiring a bunch of graduates or are you investing in nurturing people, particularly in the context of the community? Surely you can go hire all the people out there, but there are more talented people that may not have a college degree.

And what are you as a company doing, to invest and nurture that talent out there because end of the day, it is not… When someone becomes successful, the key really is not about the talent. It comes down to opportunity. The reason for success is opportunity. If you give an individual an opportunity and nurture them through that. So you’re polishing the stone to become a diamond and you’re nurturing them. And there are a lot of talent out there that are not given enough opportunity. And if you can give them that opportunity and nurture them, that will… And it’s not just financial. And I mentioned this earlier, what’s the point of being financially successful if you’re morally bankrupt. And then similarly, this is an important point. It is that that psychic kick that she was talking about that is equally important when you nurture that talent, and there’s a human element to that.

Brent Leary: Raju, if you were in Anita and my’s position, what should we ask Sridhar? What question would be a good question to ask?

Raju Vegesna: How much time do you have, Brent?

Brent Leary: We got all day, man!

Raju Vegesna: There are a lot of things we discuss internally more than we discussed externally, but Sridhar comes up with a lot of interesting things. For example, he came up with this rule revival, like earlier on this year, and similarly has come up with transnational localism. Maybe we can expand on that a little later. So like that, he comes up with a lot of these things. I would call these a group demander, maybe, or call them “Zoho-nomics”, the Zoho way of doing things, running your business. Maybe we’ll discuss something that he probably hasn’t discussed in public. So Sridhar, can you talk about spiritual economics?

Sridhar Vembu: The spiritual work, that actually has a deeper connection; it’s the opposite of pure materialist focus. It’s not the economics of GDP and numbers.  I’ll explain this a little bit as we talked about this in the context of what is the ROI of an effort like Zoho Schools. Yes there is an ROI number but the benefit is much bigger.  And even the familiarity capital Raju mentioned in the beginning, you cannot actually measure it. You cannot put it on a balance sheet. You cannot assign a number to it. That does not mean it does not exist. You see one of the problems, in economic spaces, is If it cannot be a put on a balance sheet, it might as well not exist in the business world, right? Likewise for economists in terms of GDP and all of that.

Philosophers have argued this point that this is not actually reality, because I want subjective satisfaction of something, of service, of a product. Those things matter as much as the objective ROI. And the biggest proponent of this idea in the tech industry, of course, was Steve Jobs, right? He actually talked about the aesthetic beauty of the product, about the product doing something beyond its objective features and functions. There’s an aesthetic subjective element to it. And that’s exactly the same concept applied in the economic realm. And I actually have three cardinal [rules] that I use, and that is I call them balance, symmetry, and harmony.

In fact I teach this to this village here because we are on the other side of… This village is like the other side of the world from us, San Francisco. What they sell is, rice, maybe some vegetables, okay. What they buy might include all the manufactured products. That includes your smartphones, your TVs, your fans, your tractors, all of them, all the benefits and products, even simple as simple products as clippers.

And if you look at the terms of trade, it does not balance the… In effect, having to buy more value than they can sell. So they bridge it by exporting their own labor, migrant labor, or by borrowing money, getting in a debt trap, or some government transfer programs, in some cases, which in most countries, it’s food. There are government programs to transfer resources to rural areas so that they can afford to buy products. They also sell off their lands. So steadily the farmers have to sell their lands because they can’t make ends meet. So this is the lack of balance in the economy, that what we export out of here does not meet our imports into the village. Okay. That’s balance.

The second idea is more subtle; It’s symmetry. The idea is the composition of what, the technical composition or the complexity of what you sell, must match what you might buy, and I’ll give you a classic example of that that is not met.

Take the oil exporting nations in the Middle-East, they sell oil and buy everything else. They could be rich until the oil prices crash, but then they suddenly become poor, right? So I could be a big exporter of rice, yeah? And buy everything using rice, but when the rice price goes against me, I’m completely screwed. And this happens to [economic] cycles, in developing countries like with Chile and copper, and beef with Argentina, where commodity prices crash. This is true around the world in developing countries. So the symmetry is an argument where the composition, all the complexity of what I buy has to match the complexity of what I sell on the group level, or a village level, or a county level, on a state level.  All of them.

And then harmony. There has to be a semblance of justice and fairness in your distributions system or else we are going to see the social conflict. The U.S. is a very rich country, but a lot of Americans are not feeling rich though, right? And that’s the social conflict. So these are the three foundational principles; the balance, symmetry, and harmony. And I just looked to get them on that, this spiritual economics topic. I hope that gives you an idea.