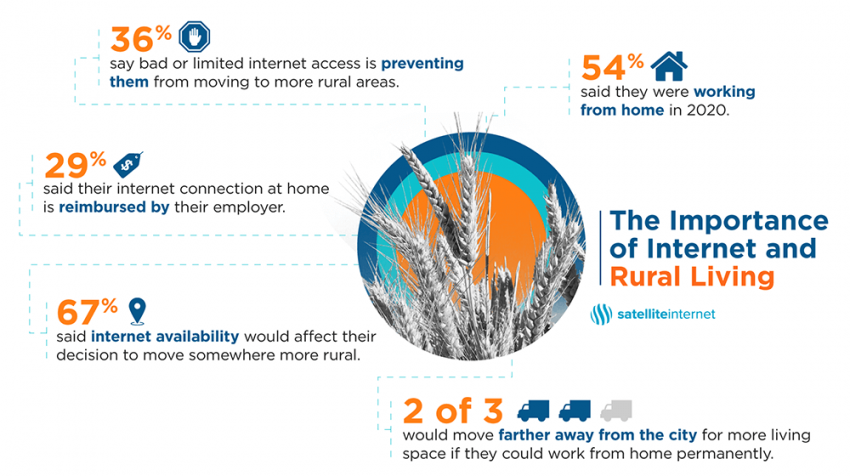 Some 36% of Americans say bad or limited internet access is preventing them from moving to rural areas. This according to a report by Satellite Internet. With COVID-19 forcing much of the commercial and social activities to go online, the internet has become an integral part of lives everywhere.

Currently, 54% of Americans now rely on the internet for working from home. In fact, a recent report indicates employers save up to $11,000 annually for each employee who works from home at least half the time.

Even though people are enticed with extra space and affordable housing in rural areas, they, however, need a fast and reliable internet service to support online activities.

Other findings in the report include:

Good internet connectivity can make a positive economic impact on both livelihoods and businesses in rural America. This will require faster connectivity and affordable internet plans.

To this end, public and private organizations have been investing in the infrastructure in rural areas. Microsoft did so by investing roughly $10 billion in a Rural Airband Initiative to connect around 23.4 million Americans in rural areas with internet access. And recently the Federal Communications Commission (FCC) announced the launch of a $9 billion 5G Fund to extend 5G wireless broadband connectivity to rural communities.

However, the digital divide will need to narrow for rural communities. This if they want to capitalize on the boom of work from home opportunities. More than 30% of rural Americans currently use hotspots or mobile tethering at home to get internet access. This even though internet services are typically slower and more expensive than internet plans available in urban areas.