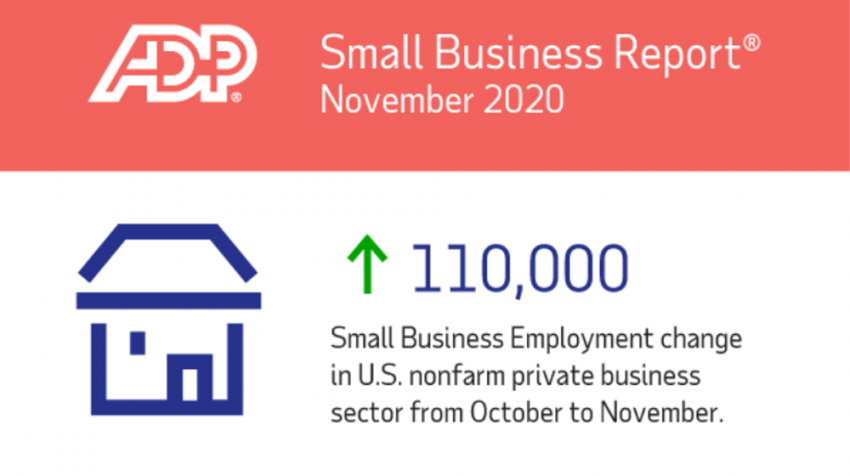 U.S. small business job growth is on the rise but at a slower pace than earlier in 2020.

According to the November ADP Small Business Report, private sector small business employment increased by 110,000 jobs from October to November. That is down only slightly from the September-October figures but is significantly less than the nearly one million new jobs reported in June.

The ADP Small Business Report, produced by the ADP Research Institute in collaboration with Moody’s Analytics, tracks employment figures for private sector businesses with 49 or fewer employees. Small businesses with one to 19 employees experienced the most growth, adding 60,000 new jobs, while companies between 20 to 49 accrued marginally less, 50,000 jobs.

The service sector was responsible for the net growth, producing a total of 114,000 jobs. Most of that, 68,000 or nearly 60%, came from the smallest businesses. The goods-producing sector, on the other hand, had a net loss of 5,000 jobs.

Although larger small businesses in that sector (those with 20 to 49 employees) gained a modest 3,000 new jobs, very small businesses lost a total of 8,000. This is likely due to the ongoing effects of the COVID-19 pandemic on smaller, local businesses.

While this growth is welcome, it stands in stark contrast to the June 2020 figures, which showed a substantive 937,000 jobs added to the American economy from May to June. It is somewhat less than the October 2020 numbers, however, which reported a 114,000 net increase.

ADP’s National Franchise Report revealed the U.S. gained 33,700 new franchise jobs in November. That number represents less than a third of the November small business figures. It is also down nearly 16,000 jobs from October’s franchise report, which showed 49,600 employment growth.

The largest gains came from restaurants (20,100) followed by auto parts and dealers (11,100). The good news is that the other sectors included in the report — food retailers, business services, accommodations, and real estate— all recorded gains, albeit small, 1,000 or less.