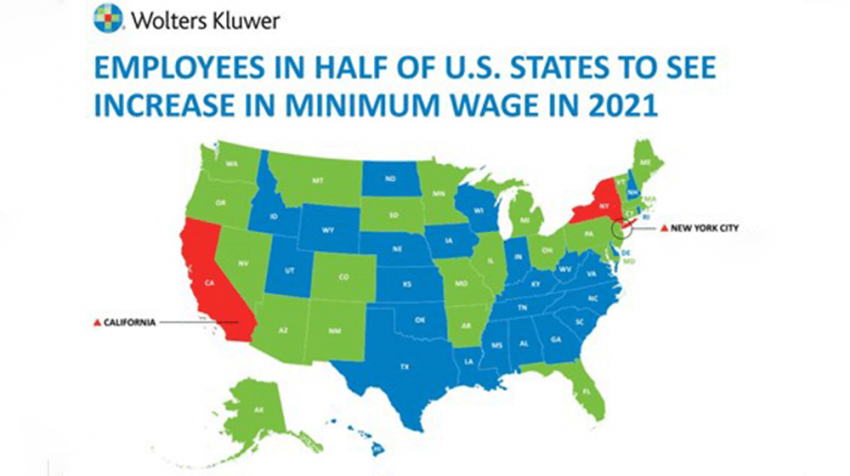 According to a study by Wolters Kluwer Legal & Regulatory 25 states will raise their minimum wage in 2021, with 21 of those states enacting the increases on New Year’s day.

By the beginning of the New Year, New York and Oregon, which both have regional minimum wage rates, will see the highest wages reaching $15.00 in New York City and $14.00 in the Portland Metro Area effective July 1, 2021.

At the end of the spectrum, the lowest minimum wage rates of $5.15 are in Georgia and Wyoming. However, most employers and employees are subject to the higher federal minimum wage rate of $7.25 per hour.

Increasing the minimum wage is expected to pose more challenges for small businesses already grappling with the effects of the pandemic. According to Small Business Index issued by the Chamber of Commerce, half (50%) of small businesses see their operations continuing for a year or less before having to permanently close. In some extreme cases businesses already hard hit by the pandemic will have to choose between raising wages or terminating staff.

The federal minimum wage has remained at $7.25 since July of 2009, its longest time without an increase since its inception in 1938. However states are free to raise the price floor.

To keep up with the rules in terms of your staff, here’s a rundown of where the 25 states currently stand.

$10.34 per hour, up fifteen cents from $10.19 per hour, based on a 1.4% increase in the cost of living. Wage rates are adjusted annually based on inflation. School bus drivers are to be paid two times the minimum wage.

$12.15 per hour, up from $12.00 per hour. In addition, employees are entitled to paid sick leave, at the rate of one hour of paid sick time for every 30 hours worked, but with limits based on the size of the employer.

$12.00 per hour for most employees, up from $11.00 per hour. $11.10 per hour for those in seasonal employment, who work on a farm for an hourly or piece-rate wage, or who work for an employer with fewer than six employees.