Watching Amazon – Is Amazon Really Ready to Deliver to You this Holiday Season? 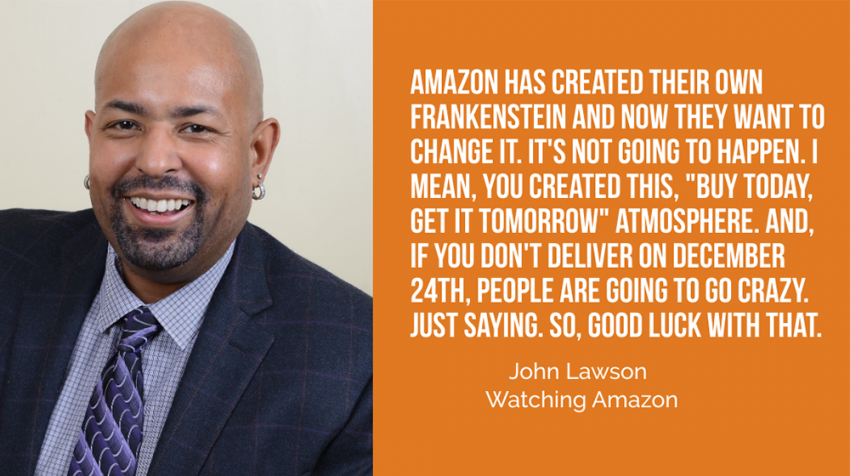 We’re full-throttle into the holiday shopping season having blown past Black Friday and Cyber Monday – which by the way broke the single day online US shopping record with $10.84B spent, according to Adobe Analytics.

But now that we’re closing in on the big day, and every minute counts towards making sure what you order makes it to where it needs to go in time for the big day, shoppers are turning to Old Faithful, aka Amazon.com, to make sure the magic happens. But a recent report on CNBC had me wondering if Amazon is ready. The title of the segment was “Amazon pushes holiday shoppers to pick up packages at stores amid potential delivery crunch.”

But doesn’t that go against the main reason we all turn to Amazon in the first place? The convenience of having our stuff sent to our homes is what got us hooked, and the belief that we’ll get that stuff when we need, is what kept us hooked. But if that’s not the case, if we have to go and pick it up to make sure we get it, does that make Amazon less attractive to turn to? Me and my Watching Amazon co-host John “ColderIce” Lawson had to toss it around a bit.

Below is an edited transcript from a portion of our conversation. To hear the full conversation click on the embedded SoundCloud player.

Brent Leary: I’m getting worried about Amazon, about them being able to handle deliveries for the holiday season, as wave two of the pandemic picks up. They’re pointing customers to do their own pickups. They’re apparently having problems getting delivery drivers, enough drivers, to make this work. What do you think?

John Lawson: It’s not like you didn’t see it coming.

Brent Leary: I thought they would be ready to roll and maybe this is part of their overall strategy.

John Lawson: If we go back to episodes, back when Amazon fell apart under the first COVID, I said this exact thing was going to happen. And you’re like, “No, they’re going to be able to handle because they done this so many years.” And I’m like, “I don’t know. I don’t know, man.”

And, here’s the deal, is that they’re getting double whammied again. Because, what’s happening is, we’re having the exact same freakout volume of buying groceries that they were having before. I just came back from the grocery store, no paper products in sight.

So, I went on Amazon. Tried to get some paper towels on Amazon. Only off brand. So, I think the surge in cases right now, versus the lock down-ish kind of moves are getting people to scarcity shop again. It’s not going to be a good time to have both of those things peaking at the same time. So, Amazon’s trying to get out in front of that.

Brent Leary: This is the thing that really irritates me about this whole situation, and this goes beyond the Amazon thing. So, you’re saying people are afraid of running out of toilet paper and tissues, but they’re not afraid to go to the airport and be amongst a million people, all huddled up together, then getting in a plane for five or six hours, where you’re sitting there with all that stale air. They’re not afraid of that, but they’re afraid they’re going to run out of toilet paper and tissues.

John Lawson: There’s plenty of toilet paper on the plane, bro, I don’t know what’s your problem is. {Laughter}

Brent Leary: {Laughter} I’m sorry. That makes absolutely no sense to me. None whatsoever. I’m sorry, that just got to me. I don’t know why. I saw the news. They have all these cameras all in the airport. They are jam packed. People are huddled up and they’re afraid not to have toilet paper.

John Lawson: Dude, I think people made their plans, and the CDC didn’t really, they didn’t show forward any concern. And then all of a sudden like five, six to eight hours, they just was like, boom.

Brent Leary: I’m just, that was a total rant on another level, but-

John Lawson: That was a rant on another level. Let’s get back to business.

Brent Leary: All right, let’s get back on track. I’m worried because, maybe this is their plan B. See, they didn’t have this plan B before, but now, maybe they’re just priming people to-

Brent Leary: If you really want your stuff, you’re going to have to go get it.

Brent Leary: I tend to agree with you, because what’s the main reason people shop at Amazon? It’s not for the pricing.

John Lawson: Yes, Amazon has created their own Frankenstein and now they want to change it. It’s not going to happen. I mean, you created this, “Buy today, get it tomorrow” atmosphere. And, if you don’t deliver on December 24th, people are going to go ape shit. Just saying. So, good luck with that.

Brent Leary: It is what they are known for. They’re not known for you having to go pick it up at a location.

John Lawson: Pick it up? Wait, I got an order from Amazon and go pick it up?

Brent Leary: That kind of goes against everything, when you think about it. That’s why when I saw this, I was like, huh?

John Lawson: Honestly, if it were incentivized, I would do it. Wouldn’t you, if you could save a few dollars?

Brent Leary: Yeah. I’m all for incentivizing. If you can say, “Hey, pick it up.” I mean, cause it’s saving Amazon a few dollars, right?

Brent Leary: They don’t have to spend as much on the last mile. So give a discount, “Hey, if you pick it up at one of our locations, we’ll give you 5% off.” Something.

John Lawson: Or, you know what, or a credit.

Brent Leary: I didn’t see that in the story, though.

John Lawson: Give me a credit.

John Lawson: Yeah. Make me come back and shop-

Brent Leary: We are actually helping them as much as … Yeah.

John Lawson: Or a free movie.

Brent Leary: Give me a free digital product, yeah. But I didn’t see that.

John Lawson: All kinds of ways they could incentivize that. But if they don’t-

Brent Leary: I can see that.

John Lawson: If they just ask people to please do this, it’s not going to work.

Brent Leary: Oh, it just goes completely against what we are used to from them. That’s why I started freaking out a bit.

Brent Leary: That and the toilet paper …

John Lawson: I still don’t get that freak out.