Tien Tzuo of Zuora: The Second Decade of the Subscription Economy Should Aim to Democratize Access to Everything for Everyone 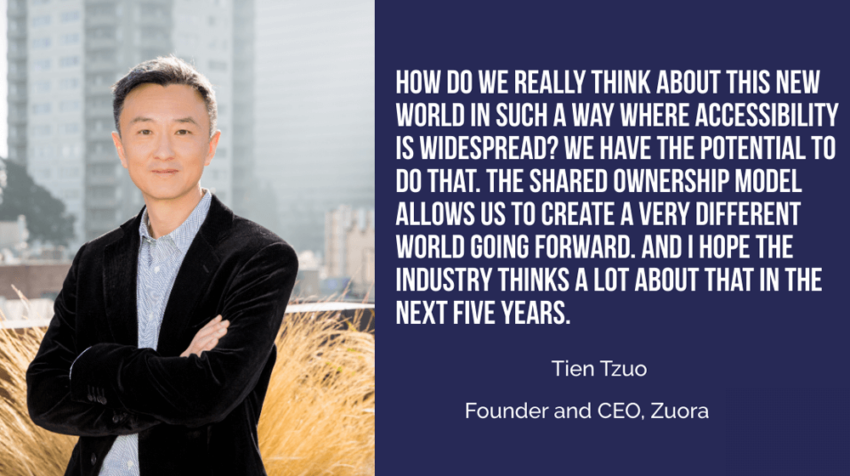 It was ten years ago last month that I first spoke with Tien Tzuo, founder and CEO of subscription management platform Zuora, about what he was calling the Subscription Economy.  Back then people really didn’t know what it was all about as most of us were still buying things outright to own them.  Five years later when I next spoke with Tien things had changed dramatically as most of us were subscribing to at least one of the things we used to buy outright, like music, movies, clothes and even cars.

My CRM Playaz co-host Paul Greenberg, and Playa-in-Residence Nicole France, join me for this wide-ranging LinkedIn Live conversation with Tien, where he also talks about the lessons he learned working at Salesforce, where he was employee number eleven and Chief Strategy Officer before founding Zuora.

Below is an edited transcript of a portion of our conversation.  Click the embedded SoundCloud player to hear the full conversation.

smallbiztrends · Tien Tzuo of Zuora: 2nd decade of Subscription Economy should democratize access to everything

The pandemic’s impact on the Subscription Economy

Tien Tzuo: 2020 was a huge victory for companies that had moved into the subscription economy. And so if you’re a pure subscription business, you probably thrived in 2020. And so you see that with Zoom. You see that with a bunch of other companies. And if you were a company that was dabbling into subscriptions, what you saw was that was the strongest part of your business. It probably was the fastest growing part of your business. In other places really declined. And we’re seeing this across the board.

Our study, we’re doing them monthly, and the last one was towards the end of the summer. And we showed that half the companies in the subscription economy really weren’t affected by the pandemic, about… Can’t remember the numbers. About 25% actually grew faster. And about 25% that grew slower, half of those, about a 1/8 of the whole pie, were still growing, just a little bit slower rate. In the last 1/8 that actually shrunk… Their revenues didn’t drop by 60, 70, 80%. Their revenue’s dropped by 5%, 10%. Because they have a recurring customer base that was loyal and they were able to pivot.

One of our favorite examples was restaurant services, restaurant reservation services, like Resy, obviously there’s no reservations, but they pivoted really quickly to say, “We’re going to help you with curbside pickup, home delivery, whatever it happens to be.” And so companies were really able to pivot and say, “Look, we understand your needs have changed. We understand you were talking to your customers. And so maybe what we used to do for you is not quite relevant, but look, we still have expertise. We still have innovation.” And they were able to pivot and hold on to the bulk of their customers. And then towards the back half of the year, they started growing again.

Another company that was a great example would be Kayo. They’re the sports streaming service, the number one sports streaming service down in Australia. And in March and April when there were no sports, they thought their service was just going to decline, but they did a couple of things. One, they had a second service around movies that they were going to launch towards the end of the year. They moved that up. And the sports service started… like the whole Michael Jordan series on ESPN. Because people still want to watch sports. They can’t watch live sports. Well, find some other stuff for them to watch. And they’re going to stick around. And so they found that their sport service actually didn’t decline. It actually accelerated. Now they pulled up the movie service. That’s accelerating too. And they’ve got these twin engines. And 2020 has just been a fantastic year for them.

And so that’s what we found. Companies that were subscription businesses really, really thrived. And people are just starting to wake up to the power of this business model. Last year was a complete game changer for us. I mean, we wrote our book. I think it came out in 2018. The last year because of shelter in place, because physical location, stores, all that kind of stuff really went out the window, we’ve just seen some amazing stories of companies transforming.

We wrote about Fender in the book. It’s one of people’s favorite stories, because a lot of these things are IOT, but Fender’s like, “Nope. We’re not touching the guitar. We’re traditionalists. Guitar’s got to stay the same. Nobody wants smart guitar. No one wants to connect their guitar. But we’re going to build this whole digital experience with apps and tuning the guitar, teaching you how to play the guitar.” And that service is doing okay. And I think if you buy a guitar, they have little postcard saying, “Hey. Sign up for Fender Play. Sign up for Fender Digital.”

But when people in shelter in place in April, they decided, “Look. People are probably stuck at home. Some of them want to watch…” What was it about? Tiger King or something what was popular.

“Don’t watch Tiger King. Learn how to play the guitar. Get that guitar out of your closet, your attic.” And they 10X their subscriber base in 30 days. And if they didn’t have that digital relationship with their customers, they’re depending on customers to go to the guitar center, the physical store, they would have been a completely different company. But as a result, you look at their 2020 results, not only did they sign up a million subs, but they actually sold more guitars last year than they ever did. And so that digital relationship with your customers has been the game changer last year.

Small Business Trends: Amazon put out this page about their new Amazon subscription boxes, where it’s you could subscribe to all these different bundles of things in the category. When you see something like that, how does that make you feel?

Tien Tzuo: I think there’s certainly a lot of successful boxes out there, to choose out there. But I think the number one mistake that we see people make, companies make, is really to say, “Let me take my same business model of selling you a product and let me just do it on a recurring basis.” So we’ve got the whole stuff in the box market. And that’s not really what it’s about. If you go back that story of Salesforce, it’s really about you can actually understand more about your customers than you could ever do before. There’s no reason not to have a digital relationship with your customer. And I’m not talking about just the purchasing. I’m talking about understanding how they’re using your service. Are you delivering the value that you’re marketing and your brand or your sales people promise or whatever you sold them? And how do you build a relationship around that that delivers a higher value.

Subscriptions are about personalization and consumption

So Uber’s not just about renting a car ride.  Well, the whole point of the car is to help you get from point A to point B. Let me help you deliver that. The whole point of buying a tractor or an excavator is to move some dirt. But what if I can charge you based on how much dirt you moved? Wouldn’t that be better? Wouldn’t you be better off with that?” And so the successful boxes, I mean, if you look at, say, a Stitch Fix, it’s not just about, “Hey. You get some clothes.” You actually have a stylist that understands who you are, understands things are going in your life. You have somebody you could talk to. So they’re curating where they’re building the whole experience that delivers something real, something higher, of higher value that you’re really, really looking for it.

And those are the companies that are doing something new, doing something innovative and really transform. But look, it starts… And you guys know this. It’s starts with the customer. It starts with the customer and it’s starts reimagining them as a subscriber to the innovations and the expertise that you have. Fundamentally, people are buying less and less stuff. And so if you’re a car company and your business model is based on cars sold, you’re going to have a hard time growing. But if your business model is based on miles driven, that continues to go up. Hours of base playing goes up. Console sales going down. Hours of news consumed, it just seems to be going way up, but number of newspapers sold, really coming down. And so this idea of tying what you do to customer value, to consumption and to usage into ongoing value, then you could just focus on increasing the value that you’re delivering to your customers and then the revenue model will take care of itself. Your revenue model will continue to grow.

Looking five years into the future….again

Small Business Trends: Since I asked you five years ago about where we were going to be five years from now, I think we need to ask you, where are we going to be talking about in the next five years with the subscription economy?

Tien Tzuo: Maybe I’ll give a slightly different answer this time. There’s a lot of stuff going on around us. It’s hard not to be affected by it, especially through a year like 2020 and even the craziness that continues. The ice storms down in Texas. And so we’re obviously huge believers in the subscription economy.

Just talking a few things about Salesforce, the Benioff reference. We used to talk a lot about the democratization of software. This idea that in 1998, 1997, you got to be a big, big company to take advantage of CRM. And when you move this model to a subscription model and it’s just all in the cloud. It’s just all a fleet of cars that you can access from your phone through Uber, there’s the ability to really democratize access to these capabilities and really give much, much greater benefit for all.

See Also: What’s Behind the Growth of the Gig Economy?

But in today’s world, there’s no guarantee that you have equal accessibility. And so is there a way that we can move into this new subscription economy world, the new world of lack of ownership, usership, accessibility, but do it in such a way that accessibility really is equitable across everybody in the world? And what does that really mean? Does that mean that every company should think about a free offering for people that might not have the advantages of accessing what they did. But how do we really think about this new world? And do it in such a way where accessibility is widespread? Because we have the potential to do that. The ownership model really breaks it down. And the shared usership and the shared ownership model really allows us to create a very, very different world going forward. And I like to hope that the industry thinks a lot about that in the next five years.