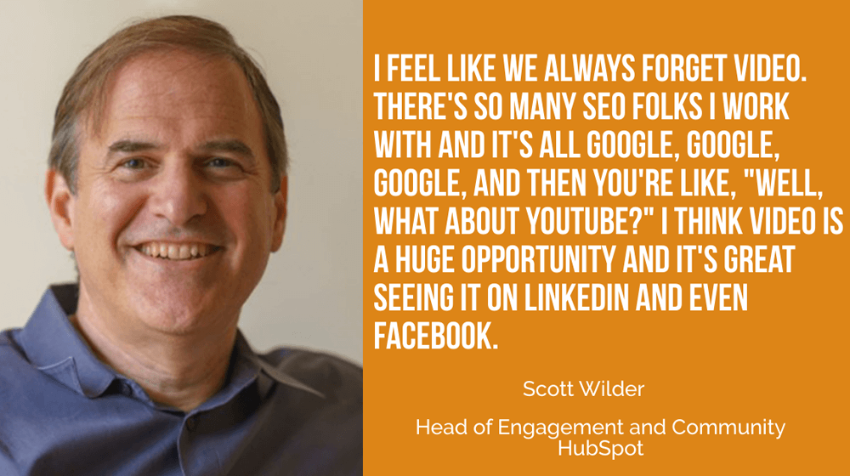 Earlier this week Scott and I had a LinkedIn Live conversation on how community building has evolved over the years, it’s a role in digital transformation efforts, and how it will need to be done in a post-pandemic world in order to stay in tune with rapidly evolving customer needs and expectations.

Below is an edited transcript of a portion of our conversation.  Click on the embedded SoundCloud player to hear the full conversation.

smallbiztrends · A Few Good Minutes With Scott Wilder, Head Of Engagement And Community At HubSpot

Small Business Trends: What have been some of the biggest, more meaningful changes to building communities over the years?

Scott Wilder: I think a lot of the core principles are the same. What’s changed is right now at this moment because of the pandemic, because of the creator economy, communities become more in the spotlight. They’re not at the C level table yet, but they’re definitely getting a strong voice. And then I think the second thing that’s changed is more and more people are leaning into analytics and the ROI. Secondly, I think people are leaning into thinking of community almost like as a product, how it’s integrated and embedded into the whole customer experience.

Then I think the last thing would be a lot of companies are thinking about becoming a media company, and we can talk more about that later on. And so what role does community play in that? By the end of the day, the principles are the same, trust the customer, give them a seat at the table when you’re co-creating, engagement is important but relying on the community to respond, user-created content. Audio, audio is new as well, but some would argue that Discords has been around for a little bit, so audio’s been around.

Scott Wilder: So community plays a tremendous role because it’s a great opportunity to get customer feedback. It’s a great opportunity to co-create, how many times… I’m a corporate guy. I know you’re in a different space, but how many times in the corporate world have we sat at the table, sat at a whiteboard, knocked out the customer journey, but there’s no customers in the room. Right?

Scott Wilder: I was saying earlier to somebody that in my staff meetings we used to first put an empty seat at the table for the customer, and then we just invited customers. But there’s so many times you’re mapping it out, so how can you do this digital transformation without customers. And a great way to access the wisdom of the crowd in an older term, a great way to access it is through community.

So I think that’s kind of two key things. And then the pandemic, it’s interesting because the pandemic has accelerated a lot of things, virtual events, et cetera, et cetera, but we’re also kind of seeing a rebalancing right now. What I’m saying is that, what I mean is that Clubhouse has seen a slight decline in engagement, right? So people leaned in so much because they had to, and they really wanted to reach out to folks and community and online events. It’s great to do that, but now in terms of digital transformation, it’s kind of like we’re stepping back and kind of reevaluating that thing called offline as well because that can play a role in this whole kind of evolving experience.

Small Business Trends: Are you starting to see as companies make a shift to a subscription model, they do focus more on a community to help them with a churn situation?

Scott Wilder: I think it’s with churn, but also to maximize those dollars from company or from a customer as well. Right? I’ll call it above the line. So above a line is maximizing the revenue that’s generated. And so community could be introducing people to other services you have, other products you have. Our product portfolio is increasing pretty rapidly. And then obviously there’s below the line that everybody talks about in terms of support, deflection. We obviously look at churn. And so going into your point about churn, you might say that we’ll look at churn in terms of-. Our customers that are churning in the relationship in community, or we’ll look at customers who potentially could churn and see what they’re doing out of community. And then we can also say that if somebody comes into the community and they’re using say our marketing hub, but they’re kind of talking to other customers about the support hub or the service hub, that’s an opportunity for a cross sell.

Scott Wilder: That’s a great question. I think it starts at the top and really the community leaders have to work with the C level to say, if you give customers room to talk about what’s important to them and have them help each other, then everybody’s going to benefit from that. So you need a strong leader who realizes that you really do need to be customer first. And it’s not easy. As I go through my journey, some companies have done a better job. There’s one company I worked with in the past where to be transparent, one of the reasons I moved on is because all of a sudden they wanted to start selling off the community. Right? So that wasn’t really in the spirit of getting people together, like-minded people and having them interact with each other and help each other grow.

Small Business Trends: There’s so many different ways to get people’s attention. Is it harder today to build a community and keep people engaged now than it was back in the day 10, 12, 15 years ago?

Scott Wilder: So back in the day it was harder to get resources for community, right? Now you get the resources, but to your point, there’s definitely more noise, right? Out there. And so then you need to think through, are you going to take kind of a hub and spoke model of trying to participate in those other communities or other social networks and bring people to this site. You need to think through your strategy for that, but there’s definitely a lot of noise. And so then the question is, what is the added value? And so in HubSpot’s case, we have the academy, we get to think through about how we integrate educational content. And I know there’s just the comment about education there. So thinking about education content, thinking about what other kinds of media that you can bring to the table as well.

It’s definitely a lot of noise. You just have to say this is going to be a place where you can interact with people who are dealing with the same sort of problems in a secure environment. That’s the other thing, too, right? At the end of the day people are still going to Facebook, but there’s definitely skepticism out there about how safe my information is. Also in this industry trend, I believe it’s a trend, is these like-minded people want to gather in smaller groups, right? Instead of having this huge discussion on Facebook, there’s actually a trend celebrated maybe by the pandemic of smaller groups, maybe a 100, 200 people getting together in these spaces. And so a lot of these community platforms really optimize for that, so.

Small Business Trends: So you talked about how you’re liking the, I don’t like the term social audio, I actually like how Clubhouse calls it drop-in audio.

Small Business Trends: So it sounds like you like that. What about video? What about streaming? Where does that fit into the mix of tools?

Scott Wilder: It’s a great point because I feel like we always forget video. There are so many SEO folks I work with and it’s all Google, Google, Google, and then you’re like, “Well, what about YouTube?” Right? So I think video, yeah. It’s a great point. I think video doesn’t get enough of the focus. And I’m not sure exactly why that is. I don’t claim to have all the answers, but people leaned into text, but this is obviously a whole generation that there’s a lot of video and video on their phone, et cetera, things like that. So I think yeah, you’re right on video is a huge opportunity. I mean, it’s great to see this on LinkedIn and maybe Facebook. I expect a big wave of people doing videos on LinkedIn. It’s kind of like all of a sudden LinkedIn must have highlighted their poll functionality, so right now everybody’s doing polls. So I would love to see people learn in more with video. I think it’s a huge opportunity.

Small Business Trends: I think it’s like… not just like what we’re doing here, but even Tik Tok, I mean the growth of Tik Tok with videos. I’m hearing people in the AARP crowd working at enterprises talking about, how do we figure out how to integrate Tik Tok into our engagement strategies? Twitch.

Small Business Trends: I mean, it’s pretty amazing what’s going on. And a lot of that is video-driven. Although I think you’re right, it seems like the focus from most of the business side is on this drop-in audio, which I guess, is easier to do. And you can do a lot of it, you’ll just have a phone and you’re talking into it. But it seems like there’s a lot of stickier engagement from video and it’s not just live stream, it could be the short-form videos that go up. I mean, even on the stuff I do, a two-minute clip can get over 20 hours of total viewing minutes in some of this stuff on a business social network versus let alone what’s going on YouTube and Tik Tok and things like that.

Scott Wilder: Yeah, no, exactly. We had some success with this when I worked at Marketo of having user-created videos on the branded community. But if you go to all these branded communities and I feel like a mind sweep where every night I go to 10 and to look at what’s going on there. Very, very small percentage is video. So I think how to, especially in a, I’m in the software business, I grew up on highway 101 in Silicon Valley with working with tech companies. So many how-to’s and demos can be done with video. Right? But instead, we have people who are hammering on the keyboards, right? In these long explanations. So it could be just how people across [inaudible 00:12:49] information, hopefully, that will, or that will probably change over time. This younger world comes up and is more comfortable with creating videos.