Raju Vegesna of Zoho: Transforming from a Tech Company into an Ad Company Puts Strain on Hard-earned Customer Trust 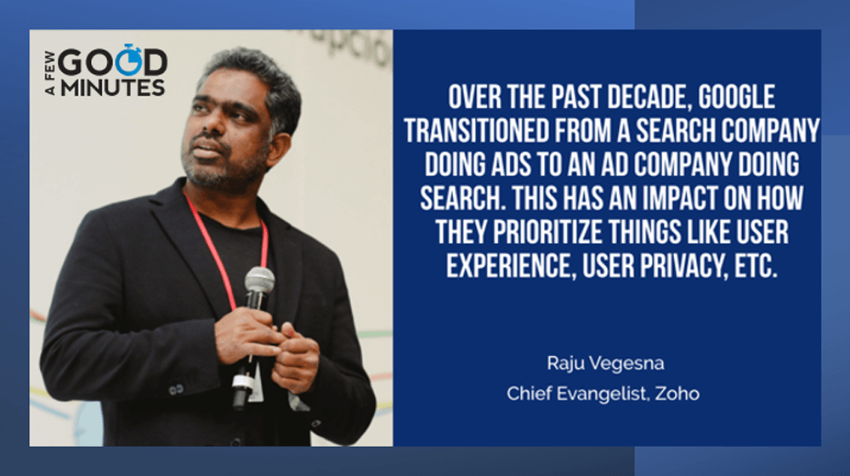 When Google announced at the beginning of the year they will be phasing out the use of third-party cookies in their Chrome browser it provoked a strong reaction in a couple of ways.  Some saw it as a nod to improving customer data privacy, as cookies allow companies to track where you go on the web and create opportunities for marketers to “stalk” you with ads wherever you go.  And marketers who worried about not being able to stalk you wherever you go on the web.

And it’s those dueling positions – customer privacy vs marketers need to market – that is proving difficult to phase out those cookies, as Google announced a nearly two-year delay in their cookie phase-out plans last week.  The delay seems to be brought on by a hesitancy of some websites and tech companies to implement the tech Google is experimenting with as a cookie replacement  – based on the Federated Learning of Cohorts (FLoC) approach.  This is supposed to provide a level of abstracting individual user information by creating groups of people with similar browsing habits and placing them in cohorts.  And advertisers would have access to cohort data, not individual browser data.  But there have been enough concerns about this new approach to slowed the timeline down.

Raju Vegesna, Chief Evangelist for Zoho and a thought leader in the area of customer data privacy, joined me for a LinkedIn Live conversation on why he feels Google had to delay the cookie phase-out, and why this may be more about protecting ads-centric business models and marketing, and less about protecting customer privacy.

Small Business Trends: You’ve said that you feel that Google has transitioned from a search-first company selling ads, to an ads-first company that also does search.  Can you fill us in on this and how it may have played a role in the recent announcement to delay the phase out of third-party cookies?

Raju Vegesna: Yeah, I think the difference is subtle. Sometimes you have to ask yourself what kind of company you are, are you a technology company or a search company also doing ads. Or are you an ad company happening to do search? And this happens all the time in the industry, we also ask the question, are we a technology company selling stuff, or are we a sales company selling tech. Because that helps you prioritize the size of your R&D team versus the size of your sales team.

One thing that I noticed in the past, Google, maybe unconsciously or consciously the transition from being a search company doing ads, to an ad company doing search. Why do I say that, my own experience, if you go to google.com on your mobile and see such any term, it is likely that the first results of the entire page is want to be ads. Try that on your YouTube app and that will be littered with a bunch of ads.

That’s your top priority then, what all you see on the top, well, they’re all ads, which means you’re prioritizing advertising. There was a point where I used to trust Google and at that point, the ads were on the side and the content was at the middle. Which means you as a user are seeing the content right in front, that is a search company serving the user, also doing ads. But now the priorities switched, where you see the list of ads right there and then search results, actual search results are two or three scrolls away. And to me, the difference is very subtle, but that tells a lot on what their priorities are.

Small Business Trends: How do you see what’s going on with Google, with what they announced and the announcement of having to push it back a little.

Raju Vegesna: To me that basically shows the decline in user trust, and this is not totally unexpected, by the way. Let me explain that in a little bit. In typical company, like say Zoho or any company for that matter, user trust is directly proportional to company’s revenue, which means if users trust Zoho or any other company, that means they will trust us, and the revenue stream will go up. Which means our interests as a company and a lot of businesses, this is a typical business, the interest are aligned. So, revenue is directly proportional to user trust, but in Google or in Facebook or any ad companies case that their users are not customers. And that has the reverse impact, which means revenue and user trust is mostly proportional. So, when you optimize the experience for your customers, which are advertisers, the user trust and the user experience is minimized. And that is the reason they’ll become an ad company first and then search later.

So, that means they probably are having the best quarters out there in terms of revenue. But as I say, that is inversely proportional to the user trust, but also means the user trust is declining. That also explains why several companies, several users are not going for FLoC. They’re basically saying, “yeah, we are not going to support Google FLoC.” That is a direct decline in user trust. So, it is totally predictable, but you don’t notice it on a daily basis or a quarterly basis.

Small Business Trends: Is this really something that is going to be good for data privacy?

Raju Vegesna: No, I think it’s basically a smoke and mirrors. I know Google has a lot of information, Chrome is one way to track that there’s Android, there are services and a lot of these ad companies have surveillance systems in place. They’ll build the operating system of surveillance each of them from multiple angles. So, they’ve been doing fingerprinting and all of that across the board directly through software, like Chrome and others in some cases, operating systems. And of course through devices that you deploy in your home to whatnot. And then there’s this other side of fingerprinting that is done.

Not everything is on the negative side. The only point is, do consumers have a choice, do they have the visibility, can they switch it off if they don’t want it. And if they switch it off, is it really switched off?

I think that lack of clarity, lack of visibility, lack of control for the consumers, it results in a lack of trust. Why are users when Apple rolled out the latest version, why did users turn off tracking at all? They don’t trust anymore. And the first thing they do when they get control of it is just turn it off because the abuse has gone too far. So, that user trust is very much correlated with this and user trust is correlated between the trust. And even when Google does something good, maybe it is possible that FLoC has some good things and it really protects the user, but the abuse has gone so far that it takes a lot for some of these vendors to earn the trust and the user trust and their perception of some of these vendors play a bigger role here in turning some of these off.

And let’s be real, are these vendors like Google, really protecting the users’ information and they’re not tracking user information. The proof is going to be in the pudding where, and in this case, the pudding is that advertising product that is their core product, adverts on Google apps and their products. Are they removing targeting options in their ad product. If they’re providing less targeted options, that means they’re not able to track the users as much as they used to. If they haven’t made any changes in there, then you see it as a smoke and mirrors.

What is this really about?

See Also: Want to Step Up Your Customer Service? You Need to Read This First

Raju Vegesna: Are we replacing one technology with another end of the day? The question is, do we really need that replacement? Do we really need that is a fundamental question. If you don’t then why are we even doing it. If you are doing it for the benefit of the ad companies, there’s no inherent interest for Brave to protect that. And I like that they exist for those who are privacy conscious and it is in there for them to block FLoC. So, I go back to the same fundamental point, more than merits for the technology. It highlighted the lack of trust people have. Technology may be good, but I don’t know. I’ll be surprised how many people really looked into FLoC in lot more detail. I think even at a high level, they are blocking it because of the trust issue.

Small Business Trends: Where does data privacy in the perspective of customer experience fit into all this big discussion?

Raju Vegesna: I think the pendulum will swing back towards the privacy conscious, today it has gone too far and into privacy abuse with surveillance and whatnot. And now it has to swing back and likely meet in the middle. Is there a market for businesses whose business model is dependent on that? Absolutely. And there are some good cases out there, but it is providing visibility to the customer and knowing what is used and what is not being used, that visibility is the key.

I mentioned this earlier, customers pay in two to three ways; whether you pay with money or you pay with data and lately, a third model that you pay with someone else’s data, which is weirder. And that is the other end we are going towards. As long as the customers have visibility into that and they have an option to choose the business model, then that balance exists. Today the default is, users have to opt-out. The default has to be opt-in, until we get to that model this user trust issue will continue to linger. And I think that pendulum swinging back towards protecting user information is an important criterion, important aspect that has to happen for this industry to normalize.