Colin Fleming of Salesforce: Dreamforce is our Hamilton, Salesforce+ is our Disney+ 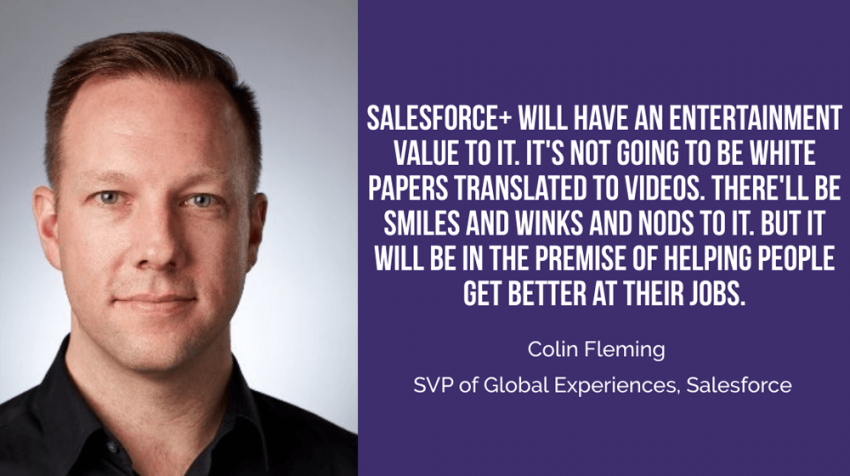 Earlier this week Salesforce announced the launch of Salesforce+, their new streaming service focused on business content and programming.  And seeing an enterprise software company launch what basically is an online broadcast network captured a lot of people’s attention, including yours truly and my CRM Playaz co-host Paul Greenberg.

So we were really interested in learning more about what Salesforce+ is – and what it isn’t – and were fortunate enough to do a LinkedIn Live conversation with Colin Fleming, SVP of Global Brand Experiences, who’s heading up the Salesforce+ rollout.

Below is an edited transcript of a portion of our conversation.  Click the embedded SoundCloud player to hear the full conversation.

smallbiztrends · Colin Fleming of Salesforce: Dreamforce is our Hamilton, Salesforce+ our Disney+

Colin Fleming: My team and I, and all of us at Salesforce spent a long time building up the events portfolio that is Dreamforce and our world tour program that we’ve had you at in the past. It’s been said often that Salesforce is an events company that happens to sell software on the side. We think about in-person experiences. When that didn’t happen, when we had to pull away from that, we had to pivot. It’s an overused phrase, but it’s exactly what we did. We started with a program we called Leading Through Change, we’ve now done 70 episodes of and we kind of asked ourselves, what would it mean if Salesforce would start to think and operate like a media company.

We did exactly that, where we started to produce original content. It was like every week there was a new topic we were thinking about and what’s really important. What do people need to hear? We started to quickly become a media company in a way, we started thinking like a newsroom. A new strategy was born for us very quickly and it was all around original content.

As much as we think that people come to a conference like Dreamforce for the food or for the entertainment, they come for the content, they come to learn and get better at their roles. I think a lot of the content you’ll see inside Salesforce+ will have an entertainment value to it. It’s not going to be white papers, translated to videos. There’ll be smiles and winks and nods to it. But it will be in the premise of helping people get better at their jobs.

Delivering Dreamforce in a Different Way

Colin Fleming: The second part of this is how do we bring the magic of those live experiences into a digital environment. We often say inside Salesforce that it’s not digital translation, it’s digital transformation. We’re not going to just translate the 30-minute calendar sessions that you see at Dreamforce or these events into an online audience. The average duration of these shows is 11 minutes. It’s going to be more modern oriented. It’s not going to be operating in a 30-minute time window. We’re going to be thoughtful about that because we’ve seen this with TikTok and we’ve seen this as so much of the content. Our attention spans are shorter than ever before. We are being thoughtful about that.

Small Business Trends: Do you see your role kind of like a network producer?

Colin Fleming: I don’t think of myself or my role as a network producer type of environment, but there are elements of that, that are creeping in, as you start to think about programming and as you think about sort of the broadcast environment, I think that’s really fascinating. We’re going to do this a little differently. A lot of the programming you’ll see come from Salesforce is going to be driven by sort of inputs from our customers. One of the questions we have internally is, should we implement the Idea Exchange for content on Salesforce+? Shouldn’t we have this crowdsourced to a degree? What does our community want to hear?

Small Business Trends: What are the most pressing questions out there?

Colin Fleming: What you’ll see in Salesforce+ initially is very, very highly produced content.  It could live on a Netflix and we’re really proud of that, but I don’t think that’s the exclusive part of it. We’re thinking we could spin up things in a matter of hours, should the questions happen in the community. Should something happened in the world of technology, things like that. We think we can be more rapid-fire. I think there’s going to be quick turn newsroom style programming, as well as more programming to a degree as well. I think we’re really fascinated about that. I think the key thing here, and you’ve seen this from Salesforce in the past, and it will continue to be true is, we have roughly 10 shows that we’re going to be launching with. Plus when Dreamforce launches over a hundred hours of on-demand content from all the magic that you would expect to see at Dreamforce, that’s going to be the initial play.

Shortly from thereafter you’re going to see podcasts in there. We’ve got one of the highest performing business podcasts in the world right now called Blazing Trails, nice plug. Things like that, that will give us the opportunity to continue to sort of add new types of media in here, bringing in partnerships, springing in… We’re going to stay away from advertising, we don’t think this is an advertising driven model. We think this is going to be a model that is very open to our community. It’s a simple subscription with your Trailblazer ID. If you have access to our Trailblazer community, have access to our idea exchange or app exchange, you get into Salesforce+ free of charge, there’s no fees of any sorts.

Paul Greenberg: How’s the management of this thing even set up. I mean, do you have people who are doing all those technical and business things like a show runner type of person or those kinds of people?

Colin Fleming: Yeah. We’ve brought in talent from ABC news, from CBS interactive. We’ve brought in talent from the media industry. Let’s say to help guide us on that. That’s been very intentional. We’ve also built the platform in a new paradigm. The idea of an event type of software managing this. We don’t think that you translate it in person event to a digital audience. We think that’s a flawed methodology. We think that the media consumption models, the Netflix and the Peloton’s of the world have showed us what the world wants to consume this content in. We’ve modeled that more than anything. I think that’s really, really important for us.

In terms of the management of itself, we have two things we’ve hired a lot of media talent. We do have this idea of broadcast producers and showrunners and these kinds of things. We’ve also built the technology fully on Salesforce, which is another thing I’m proud about. This runs on Heroku with Lightning Web Components. This is running in a Salesforce organization, and we’re really proud of that. We run through video players that are sort of partners of ours, but really proud of working on Salesforce. That’s really, really impressive for us and important for us.

Small Business Trends: How central is Salesforce+ going to be to the traditional side of the Salesforce business?

Colin Fleming: I think it’s a good question, Brent. I think one of the big things that we’re doing is we’re going to try to keep the altitude at a certain level where it’s not initially going to go into particularly product features or functionality. We’re going to keep this at a role-based type of programming. There’s going to be content that is Salesforce relevant, but it’s not going to be, “let me tell you about the latest features of Salesforce”. It’s going to be very thoughtful on this thing. You get plenty of that on salesforce.com so it won’t be a problem. But I think we are thinking about this truly, and the way Trailhead is really showing up, which is really just helping people get better at their jobs. Up-skill, re-skill and we’re going to think about this in a video format.

This is going to be business focused content with a particular set of roles that you would expect from Salesforce, but it’s going to be content that is, you can sit back with a glass of wine in your hand and watch.

Paul Greenberg: You talked about your customers and your partners, but there’s a much larger audience out there who are not customers or partners. Right now you haven’t really spoken to the access they will have because ultimately you know as well as I do, it’s not all about lead gen. It’s about being a trusted advisor to people who aren’t necessarily your customers and then they ultimately become those.

Colin Fleming: Most of the content at launch Paul will be completely open. There’s no login required. As we start to think about Dreamforce and some of the more proprietary content, there will be a logging requirement there, but it is as simple as your email address and your name. You can even use your personal email address if you choose. If you go to our Trailblazer communities, the same identity service that you’ll see there. Most of you already have access to that, you might not know it yet. I think it is very high level. In fact, a lot of the content you won’t even hear the word Salesforce. It is very intentionally about a role and about thriving in this new normal and this all digital work from anywhere in the world. I think that’s really, really important.

Dreamforce is to Salesforce+ as Hamilton was to Disney+

Colin Fleming: You mentioned Paul, distribution and my team will kill me for sharing this story, but we looked at sort of the launches of Disney+ and we looked at all these companies that have been doing this. One of the things that Disney+ did really well was they launched Hamilton at the same time with Disney+. It was just incredible forcing function I got to watch that I got to be involved in this. I think that was really important. That was very strategic for them. We had this incredible brand and asset in Dreamforce and we’re doing the same thing with Dreamforce. Dreamforce is our Hamilton moment, which is the way we’re referencing it.

Which is how do we create a moment in time that brings subscribers and this thoughtfulness, but we keep them around with really great content that helps them in their role. Has edutainment associated with it. I’m going to stop myself from using that word very quickly, but I think that’s a big part of it. The distribution, I think is where the NBCs and the Netflix of the world, these large media companies are very thoughtful in the distribution part is and we’re an enterprise software company. We don’t know what we’re doing in that context, but we are looking for, we are finding a way through it with just being smart and watching the world very closely.