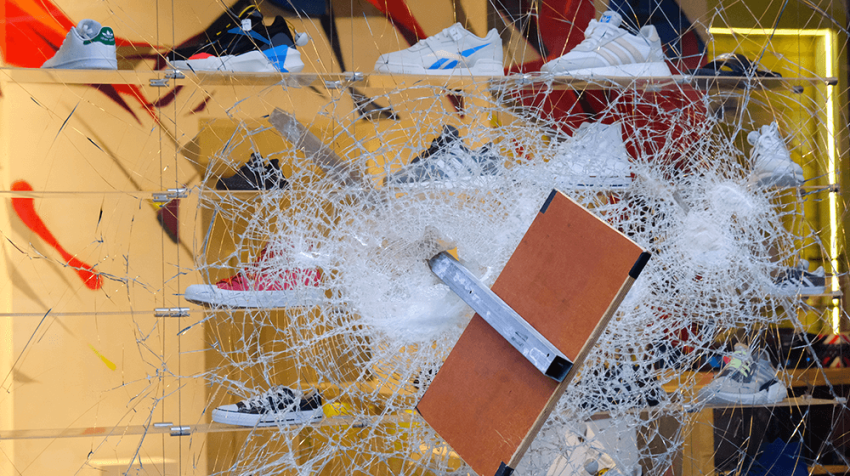 The images of mobs of criminals flooding stores to carry out smash-and-grab robberies is costing businesses a lot of money.

According to the National Retail Federation (NRF), a small group can get away with thousands of dollars in merchandise in less than a minute.

The Business Cost of Smash-and-Grab Robberies

To say these smash-and-grab robberies are brazen is a gross understatement. With up to 20, 30, 40, and 80 or more people participating in these robberies, it is not hard to see why stores of any size get quickly overwhelmed. And in an instant, they can get away with tens of thousands of dollars of merchandise depending on the retailer.

In its survey, the NRF says the average dollar loss per robbery incident has gone up to $7,594.48 in 2020. It was only $828.94 in 2019. This can be devastating for small business owners with limited inventory and minimal insurance coverage.

When you compare the data to run-of-the-mill shoplifting losses, which were $270.06 in 2019 and increased to $461.86 in 2020, a store can survive the damages. But this new wave is not sustainable even for large companies. While they might recover their losses because of their insurance, customers will no longer risk their safety to shop in a retail store.

There is no question these are organized criminal acts. These gangs target high-value items they can quickly sell to fences or online. The report says designer clothing, laundry detergent, designer handbags, allergy medicine, razors, high-end liquor, and pain relievers are their part of their target. With large gangs that is why the losses can quickly add up to thousands of dollars in a few minutes.

A Senate committee hearing in early November 2021 further highlighted the problem. Ben Dugan, director of organized retail crime for CVS, testified the average professional thief that targets a CVS gets away with $2,000 in merchandise in only two minutes.

Dugan goes on to say, “The problem is growing worse because of a lack of regulations in online marketplaces. In many ORC gangs, “boosters” steal products and get high rates from a “fence”. This is because they can quickly sell them as third-party sellers on online marketplaces.” Adding, “The ease with which online sellers can open and close their sites, especially undetected, is directly related to this increase in criminal activity in our stores.”

As one retailer in the survey put it, “Perpetrators are becoming more common in an era where it is easy to evade prosecution.”

Not only has the crime increased, but retailers are saying they are more violent than ever. Almost two-thirds or 65% of respondents noted the increase in violence. And another 37% said ORC gangs were much more aggressive than in the past.