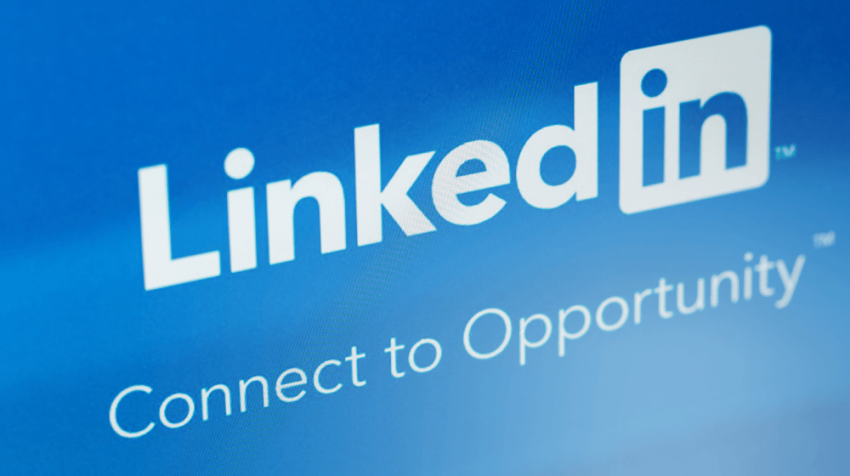 Whether you’re using LinkedIn to launch your career, expand your opportunities or network with like-minded professionals, it’s vital to create an attractive and engaging profile, including an effective LinkedIn headline. Not only is your headline one of the most visible elements of your Linkedin profile, but it’s one of the first things users see in their LinkedIn search results.

What is a LinkedIn Headline?

On LinkedIn, a headline is the short description appearing just under a user’s name. For many, the headline simply states their current job title, but an effective LinkedIn headline can communicate so much more. Job seekers might utilize their LinkedIn headlines to promote their background and skills, while a sales professional’s headline could employ keywords designed to boost networking opportunities.

Regardless, everyone from LinkedIn influencers to small business owners should select a headline that gives their target audience a reason to connect with them. What do you most want other LinkedIn users to know about you?

What to Include in a Great LinkedIn Headline

Things NOT to Include in a Good LinkedIn Headline

Just as there are ways to improve your LinkedIn headline, there are plenty of ways to make it worse. Whether you’re setting up a new LinkedIn profile, or changing to a new headline to boost your networking, be sure and avoid the following:

Are you a new business owner, a founder, CEO or managing director looking to craft the perfect professional LinkedIn headline? The following examples can serve as a guide. 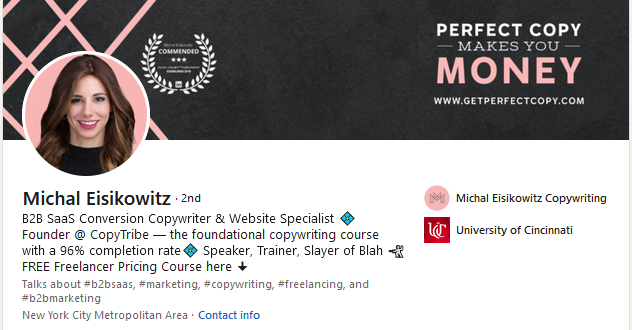 CopyTribe founder Michal Eisikowitz‘s default LinkedIn headline communicates a variety of information in a few short words. Eisikowitz’s headline efficiently tells viewers what she does and what she has to offer, while even effectively promoting her free e-course at the same time. 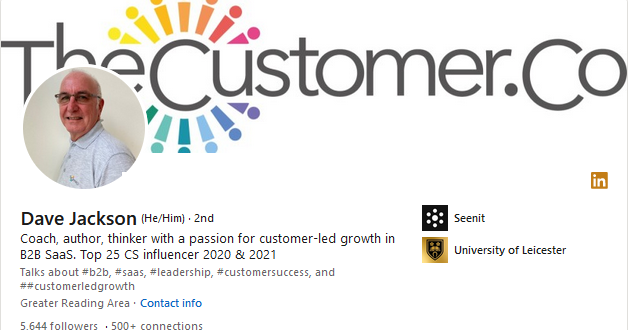 Visitors to Dave Jackson‘s LinkedIn profile instantly know what he brings to the table. Jackson’s headline summarizes his professional background and professional values in a simple phrase. Not only does he highlight his passion, but Jackson also notes important professional accomplishments.

It takes less than one second to know Josh Turner is a bestselling author and founder of a company from glancing at his LinkedIn headline. Turner uses clear language and strong descriptions to capture his professional background in just a few words. 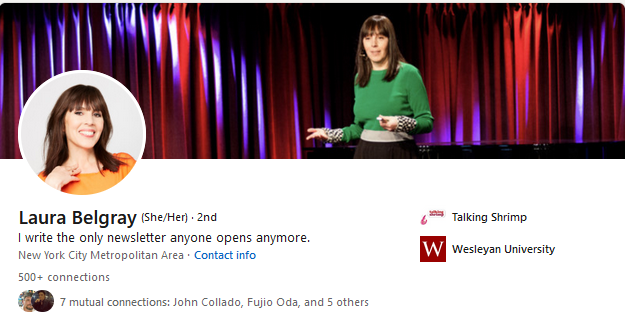 Small business owner Laura Belgray‘s LinkedIn headline has a unique value, and captures attention with a single sentence. Rather than focus on a job title, skills or mention of her business, Belgray entices viewers’ interest by focusing on her company newsletter. If her LinkedIn goal is to attract interest in her newsletter, mission accomplished!

Before salespeople can promote a brand, they have to promote themselves. When shopping for products and services, people want to know who they are dealing with, and a LinkedIn headline is a great start to accomplishing that goal. Because a salesperson’s purpose for being on LinkedIn will be different than a job seeker’s objective, their LinkedIn headline will use keywords supporting those goals. 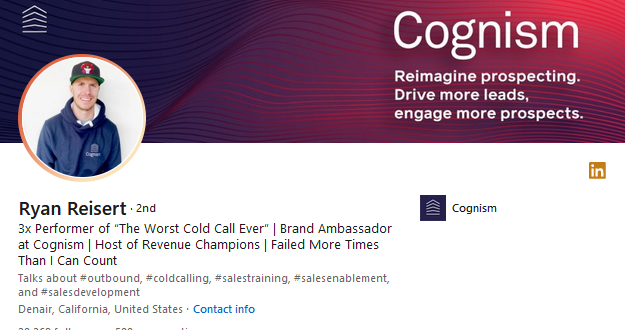 An effective LinkedIn headline calls for engaging description that set the profile apart, especially in the uber-competative sales sphere. In his headline, brand ambassador Ryan Reisert employs subtle humor in describing his experience. 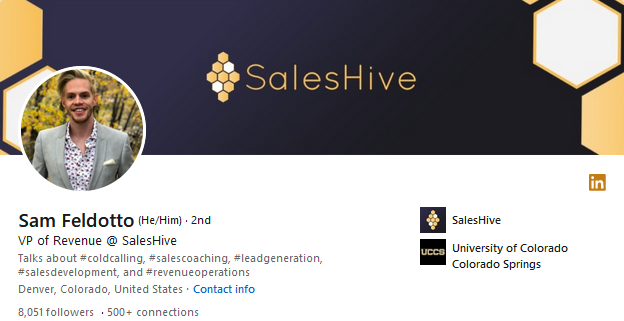 In this great example, sales executive Sam Feldotto places a heavy focus on the right keywords he wants associated with his profile. LinkedIn’s search algorithm is sure to appreciate the focus, and users of the platform quickly can discern Feldotto’s professional background.

RevenueZen founder Alex Boyd‘s LinkedIn headline is professional and straightforward, consisting of his job title, company name and a simple statement of his services. The style will appeal to both LinkedIn users and the platform’s search engine. 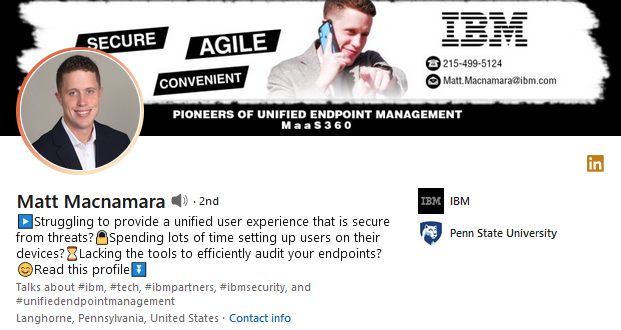 Some LinkedIn headlines are so unique they stand out without any professional description. Not only does Matt Macnamara engage LinkedIn users by including emojis in his headline, but the sales professional’s entire headline consists of engaging questions designed to generate interest in his services.

Human resources professionals such as recruiters and HR managers often use LinkedIn with very different goals from the general population. Instead of promoting their own careers, they visit LinkedIn to recruit other talented users. Thus, their headlines will take different approaches and focus on different keywords than those of a job seeker or salesperson.

LinkedIn users with stand-out skills should highlight them in their headlines. In this professional headline example, HR director Vanessa Castillo has focused on her bilinguality. 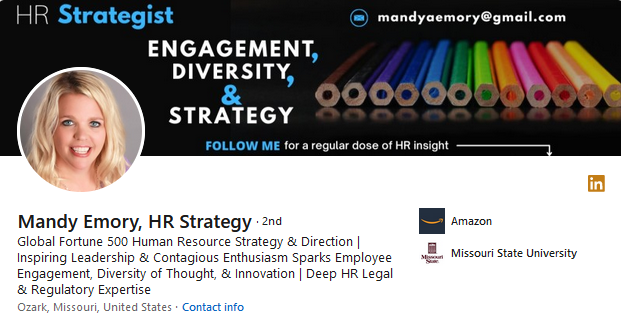 There’s nothing wrong with taking advantage of all 120 characters, or close to it. In her LinkedIn headline example, HR professional Mandy Emory not only highlights her current job status, but her professional values and experience.

LinkedIn is one of the most popular platforms for users actively seeking their next job, and millions of users regularly visit the social network in search of employment opportunities. Headlines are of particular importance to job seekers, as they serve as a primary introduction to each recruiter and hiring manager. The following headline examples for job seekers will help users secure more job offers from their LinkedIn profile.

Job seeker Dana Trent gets straight to the point in her LinkedIn headline, telling the world that she’s looking to find jobs. Trent leaves her options open by suggesting the field of office administration without additional detail. 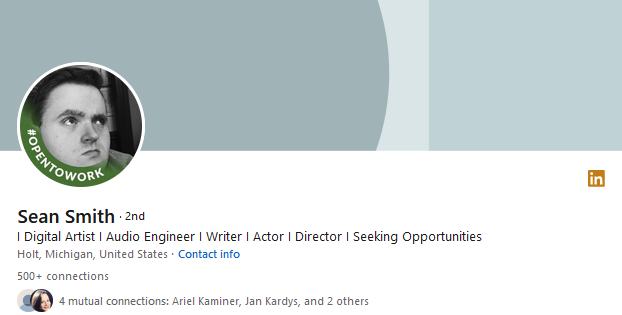 Some professionals have talents in a variety of areas, and Sean Smith must consider himself part of that group. His LinkedIn headline hits the pertinent keywords by clearly listing his professional roles before stating that he is seeking opportunities.

15. Beka Romanies, Past and Present Headline

Some LinkedIn profiles boast headlines that could serve as a miniature resume. In her LinkedIn headline, Beka Romanies lists her previous position, her job title and a statement that she’s job hunting. Need she say more?

LinkedIn Headlines for a Recent Graduate

Whether they are looking for career coaching or trying to impress hiring managers, recent graduates turn to LinkedIn for important networking opportunities. While a current college student or recent graduate might be merely starting down their career path, and they might not have an extensive resume to capture recruiters’ attention, they can make a statement with a great headline attached to their profiles.

In just a few words, student Montana White demonstrates an important employment quality, a willingness to learn. By also stating that she’s seeking opportunities, she ensures her profile will appear in recruiters’ searches.

Looking for opportunities in a specific geographic region? Be sure and include this vital information in your LinkedIn headline, much as fresh graduates like Forrest Harrell, III has done on his profile. Not only will this information save Harrell and recruiters in other regions time, but it will promise his profile appears in more searches of his local area.

If up until recently your job title was, “student,” there’s nothing wrong with highlighting your recent graduation in your LinkedIn headline. Recent grad Natalie Garner‘s headline focuses on her education, her industry and her job seeker status.

Use these Examples to Inspire Your Own LinkedIn Headline

The above examples can act as a guide to create an effective LinkedIn headline, but it’s important for professionals to add their own unique twists. After all, there are no exact LinkedIn headline formulas. Craft a headline with the elements that best serve your objectives using these and other LinkedIn profile tips.

Samantha Lile is a staff writer for Small Business Trends as well as freelance writer and journalist who contributes to a variety of web publications from her home office in the heart of the Ozarks. Her work can be viewed at Samantha Lile.
One Reaction
Subscribe
Follow @smallbiztrends
RSS LinkedIn Pinterest iTunes