Are Amazon Prime Price Increases Justified ? Is TikTok a Threat to Amazon’s Dominance? 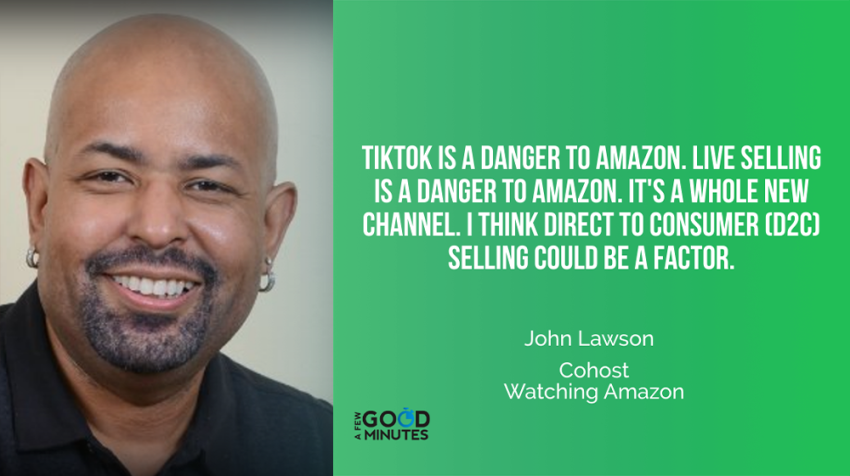 Amazon recently announced their earnings for the last quarter of 2021 and it sent their stock price up over 13% the next day.  A few of the things that caught my attention included:

These were just a few of the eye-catching numbers that had the stock blasting off after the report was published.  But two other things grabbed my attention the most.  For the first time that I can remember, Amazon reported making $31 billion last year from their advertising platform, which is a pretty huge number for a company that hasn’t really been known for being in that business compared to Facebook and Google.  But with numbers like that, it may not be long before advertising surpasses AWS as the biggest driver of operational profit.

The last thing that caught just about everybody’s attention was the other piece of news that came out of the earnings announcement – the price increase for Amazon Prime membership going from $119 to $139 a year. So with all this news coming out, my Watching Amazon show co-host John Lawson and I gave our take on what all of this added up to, and how we thought it would be received by consumers and sellers on the platform.  And if there is anything on the horizon that could disrupt Amazon’s dominance in digital commerce.

Below is an edited transcript of a portion of our conversation.  Click on the embedded SoundCloud player to hear the full conversation.

Brent Leary: I don’t know if you caught it in that video, how they mentioned how Facebook’s stock price got hit. One of the things that hit Facebook was Apple’s privacy adjustments, tweaks and changes. It’s killing Facebook’s revenue stream. But, guess whose revenue stream from ads is not being killed from that move? Amazon.

Amazon is actually at least holding their own, if not… actually, they’re still increasing. They’re still on the incline. Even with the privacy stuff, whatever you want to call it, from Apple, the tweaks, the changes. It’s killing Facebook. It’s not doing too much of anything to what’s going on with Amazon and their ad revenue, which is really interesting.

John Lawson: Why is that interesting?

Brent Leary: Because Amazon is not as affected by all the things that’s hit Facebook and Google when it comes to this privacy stuff.

John Lawson: No, Google didn’t get hit that much.

John Lawson: But not near as much as Facebook.

Brent Leary: Well, no, because they’ve got way more other things that they can pull from.

Brent Leary: But what I’m saying is what’s hurting, or in certain instances killing some of these other of guys is not doing a thing to Amazon, which is really incredible.

Brent Leary: It is. That’s what I’m saying. Because they are different. The things that are affecting,

John Lawson: So, there was no discussion of Apple actually affecting Amazon.

See Also: You Will Thank Us - 10 Tips for Better Sales this Prime Day 2019 on Amazon

John Lawson: Okay. But it’s not the same thing. It’s not the same thing. It’s not like if I’ve got some product that is off of Amazon, that I can go to Amazon and advertise it there and be successful. All of advertising, I would say 80 plus percent of the advertising budget that is spent on Amazon is spent by Amazon sellers. That’s a different ecosystem.

Brent Leary: Whatever the case may be-

Brent Leary: … Apple made a switch, a tweak or whatever you call it-

John Lawson: Yes, but nobody cared.

Brent Leary: … and it rippled throughout the whole industry except for one of the big players. That’s what I’m saying.

John Lawson: I don’t think eBay was hurt by it. Was Etsy hurt by it? I mean, you’re kind of-

Brent Leary: What are the two biggest ad platforms? Facebook and Google.

John Lawson: Amazon is a marketplace. They are not the same. Just because they got … You know what, guess what?

Brent Leary: You know, what?

Brent Leary: Maybe we’re saying the same thing.  Amazon is not directly the same as Facebook. Meaning they’re not as dependent on ad revenue in general.

Brent Leary: And specific kinds of ad revenue particularly that’s the stuff that’s hurting everybody else that is affected and totally impacted by this. Amazon is over here chilling.

Brent Leary: Not threatened. How many of the earnings transcripts has mentioned Apple’s change or Apple’s privacy tweak in reasoning why their revenue took a hit?

Brent Leary: I did not see that in Amazon’s quarterly report. We’re hurt because of Apple.

John Lawson: No, because they’re not a social platform. You’re trying to put everybody that has an ad network into one basket.

Brent Leary: What I’m saying is, I guess, when I looked at the quarterly reports for most of those companies, there’s one line that seems to be consistent in all of them. Due to Apple’s privacy change, our revenue took a larger than expected hit. Whereas that was not mentioned in Amazon’s quarterly report.

John Lawson: Nor should it be.

Brent Leary: And we just got Amazon’s first number of what it is that they’re doing in ads. And it was a huge number and it’s going up. That’s all I’m saying.

Brent Leary: Okay. It feels to me, at least the sentiment I’ve seen, are people… And maybe this is kind of the aggregate because of inflation and because of the price increases on gas and on food and on pretty much everything else, this was not welcome information that there’s a price increase.

John Lawson: It never is.

You can see them spending money on content. Even if some of that is a miss more than it is a hit. But you can see them doing it. It’s not like what I think I was starting to perceive, people thinking, oh, they’re just gouging us, getting our money, and not really giving us anything, any more value. That’s not the case. You can see the value.

John Lawson: Yeah. But I mean… Well, I mean, hey, the price increase is now. Are you saying I’ve seen the value? I’m paying for increases from you years before, months before?

Brent Leary: You’re paying for them to keep carry on the way they’ve done, which means always plowing it back into the customer experience.

Brent Leary: It’s worked for them in the past, so why would they stop that now? That wouldn’t make any sense to me.

John Lawson: We’ll see. I mean, one of the things that I think people are feeling is that prices are increasing all across the board, many different places.

John Lawson: And they’re just jumping in on the bandwagon.

John Lawson: That was very significant.

Brent Leary: Yeah. They’re talking 20%. And it seems like Netflix increases their rates every year, where this is Primes first increase since 2018.

What if Walmart bought Shopify?

Brent Leary:  Could the combination of Walmart buying Shopify do anything in terms of knocking Amazon at all?

John Lawson: You know, I think… I don’t remember who I was talking to the other day. We were talking about Walmart, and basically one of the things that… Walmart only needs a small bump in their eCommerce to be more than stable. I mean, they’re stable anyway, but to make a big difference at their top and bottom line, right? They don’t have to do what Amazon’s doing. They just need to do better than they’re currently doing with their eComm.

Because they’ve got buy online pickup in store(BOPIS). They’ve got the delivery business. I just think there’s a little bit of lag on their eComm side. If they get that together, I can see them doing a little bit more, but they don’t have to do a lot more. And their numbers don’t have to be like Amazon’s for them to be a beast.

Brent Leary: Are the Shopifys of this world really a danger for Amazon?

Brent Leary: It seems like the only real danger to Amazon is regulation and unforeseen natural happenings.

TikTok a growing challenger to Amazon?

John Lawson: You know what? I don’t know. I’ve always said this, that there’s always something lurking in the midst in retail that will change everything. So, if I was to call something, how about TikTok? TikTok is a danger to Amazon.

John Lawson: All right. I called it here. How about that? Live selling is a danger to Amazon.  It’s a whole new channel. I think direct to consumer (D2C) selling could be a factor. I don’t think just having a Shopify store or Shopify themselves are actually cohesive enough to compete against Amazon. No.