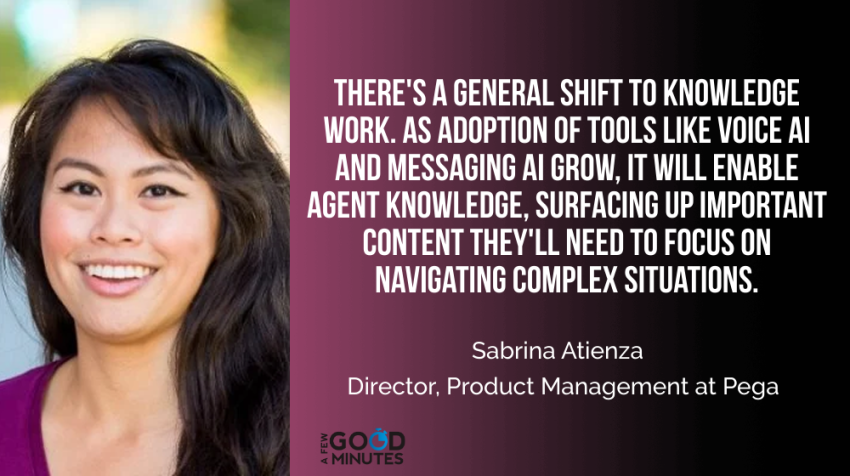 Anybody who has checked out this weekly series probably knows I have a kind of infatuation with voice technology and conversational AI.  I really look forward to the day where I can use natural language instead of typing, clicking and swiping for more of my interactions.  Which is why I’m always on the lookout for progressions, evolutions and transformations that may be leading to a day when that may be getting closer to happening.

One of the areas where you’re seeing lots of interesting stuff going on in the area of voice tech is customer experience.   And one way to improve that experience, particularly when you’re in need for assistance, is to have great interactions with a customer service agent who knows how to help you and can do it efficiently.

Earlier this week Pegasystems, a leading customer engagement platform, announced two new products, Voice AI and Messaging AI, that is looking to provide customer service agents with their own “co-pilot” to assist them in realtime as they help customers looking for immediate help.  And I was able to speak with Sabrina Atienza, director of product management at Pega, to share her thoughts on how voice and messaging AI can help human agents provide a better experience for customers in need and turn them into brand ambassadors for the company.

Below is an edited transcript from a portion of our conversation.  Click on the embedded SoundCloud player to hear the full conversation.

Sabrina Atienza:  I actually grew up in the Philippines and immigrated to America and grew up in New Jersey. And in college, over in UC Berkeley, I studied computer science and physics. This was around 2013 when I graduated and so big data and AI was just starting to become mainstream and quite massive across all different industries.

It really was an amazing opportunity to work with leading AI and machine learning professors in this space. And ultimately that’s what inspired me to start a company right out of college called Qurious, which specialize in real time speech recognition and natural language processing for B2B use cases.

Fast forward, several years, a couple of million dollars of venture funding, and after recruiting a team of machine learning and AI engineers, we ended up partnering with Pega.  They acquired us about a year ago. And I joined as director of product management, where I’m leading the development of Voice AI. And we also launched a sister product called Messaging AI, both of them very recently.

Brent Leary:  You’ve been involved with voice technology going all the way back to when you were in school, which is not that far back, but back a little bit. How have things changed since you got started in this area to where we are today with this voice technology and Voice AI?

Sabrina Atienza:  I remember the moment when I got an Alexa for the first time, so the Alexa echo and I thought it was super amazing. And everyone I knew had one, but at the end of the day, I really only used it for maybe one or two things. So playing music and maybe checking the weather.  And it occurred to me then, there’s so many more applications of voice AI, voice technology, and the things were just starting. This was back, in what? 2014, 2015.

That’s what really excited me about voice and natural language processing in general. The idea that we could leverage artificial intelligence, machine learning to understand human communication and potentially to augment or enhance human communication.  And that’s kind of the spark for where Qurious and the ideas and the ideas we’re tackling now at Pega come out of, being able to leverage that kind of technology in real time to assist humans to have better, more efficient, more effective conversations.

Brent Leary: So how has voice technology helped over the last, almost two years at this point, in making agents have a better ability to create the experiences that customers are needing in times like this?

Sabrina Atienza:   We just launched two products, Voice AI and Messaging AI. And you can essentially think of them as co-pilots during a real time phone or messaging conversation.

They’re actually listening to what the customer’s saying, what the agent is saying, and then providing real time guidance based on what’s being discussed. And ultimately, we’re driving towards better and faster customer service.  So, reducing average handling time, improving compliance, boosting agent productivity, accelerating new agent training and onboarding. And so with both Voice AI and Messaging AI, it’s basically tapping into that conversation as it’s happening, understanding the context of the customer’s issues, what are they calling in about.  And then providing helpful suggestions to agents in real time to help them resolve those issues much faster with higher quality outcomes and also more consistent experiences for their customers.

Just to give you a couple examples for each of these features and use cases that might come up. With script compliance, you could think of HIPAA compliance, where they confirm your identity or even required financial disclosures that the agent has to say, Voice AI can check for that and nudge the agent in real time, if they haven’t said those pieces of the scripts.

When it comes to surfacing actions to take, for example, say, you’re calling into your health insurer to add a new baby to your plan, Voice AI can detect that in the conversation and kick off the appropriate workflow or actions to take.

Similarly, for surfacing knowledge articles, imagine a brand new agent who doesn’t know exactly how fees are calculated for a specific credit card, Voice AI can detect what that conversation’s about, what credit card the customer has on their accounts and surface the appropriate knowledge article based on that trigger.

And then the last feature which I’m really excited about is form autofill. We can take what the customer is saying in real time, maybe their name, their address, the date of service if they’re calling in about a particular claim and we can actually take all those pieces of information and populate form fields automatically so that the agent doesn’t have to do that manual typing anymore.  They just have to validate what our AI has put in there. Make sure it’s correct, of course, but they don’t have to do the manual, tedious, error prone data entry.

And so, that’s really our initial feature set for Voice and Messaging AI. And really the focus philosophically was, how do we help save time? How do we help agents get work done faster? And this also helped newer agents get up to speed on, what is the correct process to follow here? What are the best practices to follow?

Brent Leary: Let’s just say, agents get most of it, right? There’s some that they may get it wrong, that this will help, but it’s also getting even more than what they would be having if they were forced to type it.  Because as much as I would like to think I’m getting everything, you probably aren’t getting much as you think. And so having a system that allows more data capture should also lead to better next best actions after they’ve been analyzed, that data’s been analyzed.

See Also: Want to Step Up Your Customer Service? You Need to Read This First

Sabrina Atienza:  Exactly. And that’s why we position it as a co-pilot because it’s always there in the background, whether it’s a phone call or a live messaging conversation, it’s really there in the background, analyzing it for you, picking up on cues, which you may have missed keywords and topics and intents, which you may have missed because you might be focused on other crucial activities.

Brent Leary: How do you expect this to increase the customer’s experience when they have to interact with an agent?

Sabrina Atienza:  Actually that same survey I mentioned, another finding they found was about 50 to 60% of agents said that customers are frustrated when there’s so much time spent switching between tabs and apps.

And the agent has to say, “Hold on. Sorry, the screen is still loading.” Or, “Hold on, I’m trying to find the right information.”

So just imagine being able to get the agent to the right place immediately, that makes the customer experience so much better, fewer delays, an agent who can pay attention fully to the important things going on in the conversation.

Brent Leary: Fully pay attention. It sounds so easy to do, but when you have so much going on around you, it’s really tough to make. And you’re thinking about the current thing you’re trying to solve, you may be thinking about, is it taking me too long to solve this?

How does voice/messaging AI change companies approach to CX

Brent Leary: And how this may impact my evaluations or particularly my raise or not? So anything that allows the rep to just do their job and have everything else handled for them, it should be a win-win.

How does you see this changing the overall organizations’ approach to customer experience once they started putting these kinds of technologies in place?

Sabrina Atienza:   I think there’s a macro trend that’s generally happening, which is that customers are getting more comfortable using self-service for simpler requests, which means agents are becoming more like knowledge workers.

So, there’s a general shift to knowledge work. And I think as the adoption of tools like Voice AI and Messaging AI grows, it’s really there to enable agents’ knowledge, surfacing up the important content workers need so that they can focus on navigating a really complex and sensitive situation.

I think there’s another macro trend that’s related, which is, any interaction in today’s world can go viral, unfortunately, right, whether we like it or not. One bad interaction can go viral and destroy a brand’s reputation.

So whether you like it or not, your agents are becoming knowledge workers and also brand ambassadors on the front line, talking with your customers. So being able to kind of free up their mental load so they can focus on giving your customers the care that they need, the attention that they need, again, making them feel heard and valued, that goes a long way towards that goal as well.