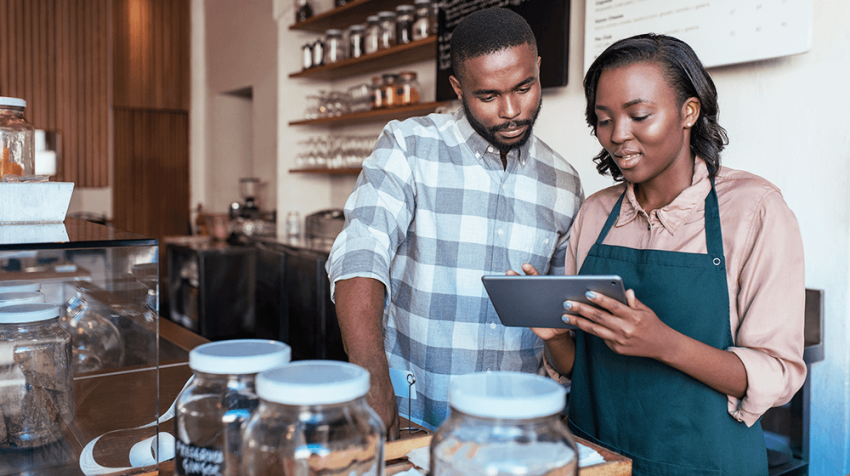 Some threw job titles behind and took their new ideas into entirely different fields. Some started with little more than $40 and grit.

Some of these African Americans became hugely successful before they reached 30 years old (see our choices later in the article). For others, the jump into entrepreneurship came later.

Top Black Entrepreneurs to Inspire You

You may not have heard of this woman, a leader in Black innovation, since her life spanned 1867-1919. Plagued with hair breakage, she developed a hair care product and traveled the southern states (mostly on foot!) promoting and selling it, as well as a skin and hair care regimen which became known as the Walker Method.

Madam C.J. Walker was one of the first American women to become a millionaire.

There’s a name that’s lost to history, and that’s the name of the television executive who told Oprah Winfrey that she “didn’t have it” and would never be successful in broadcasting. Instead, she became one of the most well-known of media people of all time. Her rich legacy includes staggering levels of financial support to educate and support young people.

Remember this Black entrepreneur’s quote: “If you’re holding anyone else accountable for your happiness, you’re wasting your time.”

Moziah Bridges started Mo’s Bows in 2011, when he was 9 years old. Today the teenage founder, president and creative director for Mo’s Bows (mosbowsmemphis.com) still handpicks the fabric used for products, which have reached $700,000 in sales. The Shark Tank graduate also designs all the neckties and bow ties for NBA teams. He pays homage to his Memphis roots with the Go Mo! Summer Camp Fund for Memphis children.

This New Jersey entrepreneur launched Mr. Cory’s Cookie’s – Mr. Cory’s Cookies (mrcoryscookies.com) when he was just 6 years old. Working with his mother Lisa, the two combined forces to realize incredible business growth. Their homemade treats, delivered to customers’ doors, are made with all-natural, high-quality ingredients. He started with chocolate chip and branched out to include more unique flavors.

5. Mikaila Ulmer, Me & The Bees Lemonade

When she was four years old, Mikaila Ulmer was stung by a bee. The sting led her to want to learn more about bees. Meanwhile, she learned of a children’s business competition called Acton Children’s Business Fair and Austin (Texas) Lemonade Day.

She decided to enter, using her “Great Granny” Helen’s recipe for Flaxseed lemonade, printed in a 1940s cookbook. Mikaila tweaked the recipe by replacing sugar with local honey.

You can learn more about the company at Our Sweet Story – Me & the Bees Lemonade (meandthebees.com) Ulmer donates a percentage of her profits to honeybee research.

Founder and CEO Maya Penn’s eco-friendly clothing is made from old vintage fabrics, as well as 100% organics fabrics made from cotton, hemp and bamboo. You can learn more about Maya’s ideas at Maya Penn – Sustainable Fashion (mayasideas.com). When she’s not immersed in fabrics and design with her company, Penn as a global activist for sustainability is sought as a speaker. She’s also written a book called You Got This, geared to inspire teens and young adults.

Brown was an international corporate lawyer when she left that career to become co-chair and co-founder of Black Music Action Coalition. She is also founder and CEO of Omalilly Projects, an artist management and production company.

She didn’t stop there. She is also one of the top fundraisers in the world for political, humanitarian and cultural initiatives. Currently she is also focusing on human rights issues in Cambodia. You can learn more about Binta Niambi Brown at weforum.

Luu if the founder of ManLuu, an American fashion house that features Creole luxury. Clothing is not all that graces the online stores pages – you’ll also see decorations, art and more. She also focuses on brand transformation, most notably a revamp of Essence magazine.

Some entrepreneurs start their company with three times less capital than is average. Howard started her Act1Group with practically zero capital.

Howard moved back to her hometown, Tarboro NC and launched Act1Group, an employment agency and consulting service. She didn’t have a fax machine, office furniture or other equipment needed to start a company. She had little money. All she had was a phone.

Through building her clients using her own marketing skills, Howard has built Act1Group into an industry leader among employment agency companies.

Walten is the CEO and co-founder of Expectful, a company which focuses on holistic care of mind and body for expectant mothers. The interactive website covers all aspects of motherhood, including meditations, events, supportive groups and more. Expectful includes a number of experts on staff, in fields such as nutrition and post-partum care.

This young entrepreneur followed a path similar to that of other minority founders of companies – she saw a need based on personal experience and followed her heart to creating a company that she loves.

Kajese is the founder and ceo of #Adtags. Kajese had been astonished and dismayed to learn that only 1% of stock images featured people of color. Stock images are a source of pictures which can be purchased by companies or advertisers.

#Adtags’ mission is to increase the use of visual content featuring people of color. The content is available for use by globally-c0nscious brands. In the advertising business of sponsored content, #Adtags is known as a business of “diversity crusaders.”

Black Entrepreneurs Who Made It Before 30

Here are more young black entrepreneurs who are awesome examples of turning an interest into optimum use in the business world.

It took her 8 years, but Asmau Ahmed had the perfect background for creating Plum Perfect. The Columbia grad (MBA Columbia Business School) also is also a chemical engineer.

She developed a personalized digital shopping experience for women of color. Customers begin by uploading a selfie. Then, based on the selfie and their answers to questions, Plum Perfect helps them build a unique color signature with recommended products, via a full administrative dashboard.

Imafidon worked at Goldman Sachs before launching Stemettes, or Girls Do STEM Too… – Stemettes ®. Stemettes is a social enterprise designed to inspire and support young women and nonbinary persons towards careers in science, engineering, the arts and math.

Gogo’s company, Sproxil, is a supply chain mgt. and technology company based in Atlanta. Gogo used his business skills to create Sproxil.

Sproxil’s goal is to build trust, and develop intrinsic security, from end to end of the supply chain using mobile technology. A company’s brand is protected from fraud – such as counterfeiting and theft- which could occur along the chain. To date, Sproxil is protecting more than 2.5 billion product units.

Ruff is the founder of SUDU Logistics, a multi-million-dollar tech enterprise. Here’s how the tech works:

SUDU is a Chinese word that means speed and tempo.

At 6 years old, Essynce Moore launched a line of clothes and products for black youth called Essynce Couture. This young fashion designer hasn’t stopped there. She’s an actress and an author, who makes optimum advantage of her worldwide name recognition to inspire and support other black-owned business.

Newson launched her venture into entrepreneurship making waves with her candles, especially her signature pink, yellow and light blue candle. From those beginnings she expanded to Super Business Girl, a training model on Facebook pages that teaches other young peers how to become entrepreneurs. She also teaches via online workshops which are geared to middle and high school students.

But from February 2020 through August 2021, the number of black business owners grew by 38%. We haven’t learned the official “why” about that stat, but here’s a guess. Those new business owners came from generations of shared histories – and deep down already knew how to turn a seemingly impossible challenge into a new vision for success.