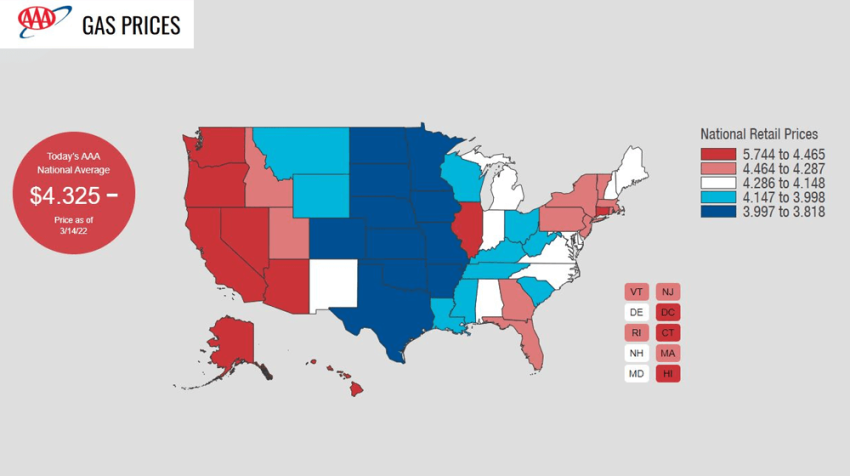 The average price for a gallon of diesel gas jumped by 51 cents reaching $5.13 from $4.61 within just a week, according to AAA. The increase in gas prices saw a steady increase in diesel prices which was $3.89 a month ago and $3.073 a year ago.

In terms of gas price hikes, the state of California saw the highest surge in prices with gas prices reaching $ 5.744 a gallon up from the national average of $4.325 per gallon. Diesel prices in the Golden State also saw prices reach $6.285 from $5.692 in just a week.

Businesses too will feel the pinch in terms of additional costs being incurred on logistic and delivery services. Soaring prices for diesel that fuels the nation’s trucking fleets and supply chains add to the woes of both consumers and businesses. This is in addition to concerns over increasing inflation.

In February over a quarter (26%) of business owners had said that inflation was their single most important problem in operating their business. Because of the inflation, an estimated 68% of owners are looking towards raising prices on their goods and services-an increase by seven points since 1981 making it a 40-year record high.

What are Driving Gas Prices?

Since the start of 2022, the national average fuel prices have continued a steady climb due to strained supply and increased demand. Fuel prices have been on the rise since Russia began its invasion into Ukraine in late February. With the war in Ukraine, raging consumers are feeling the impacts on the economy, most notably through gas prices.

A survey released by AAA last week reveals that two-thirds of Americans felt gas prices were too expensive just a few weeks ago at $3.53 per gallon. With the national average reaching over the $4 mark more Americans are expected to feel the pinch even more. Over half (59%) of the respondents said they would make changes to their driving habits or lifestyle if the cost of gas rose to $4 per gallon. If gas were to reach $5.00, which it has in the Western part of the country, three-quarters said they would need to adjust their lifestyle to offset the spike at the pump.