You Won’t Believe Some of These Epic Translator Fails 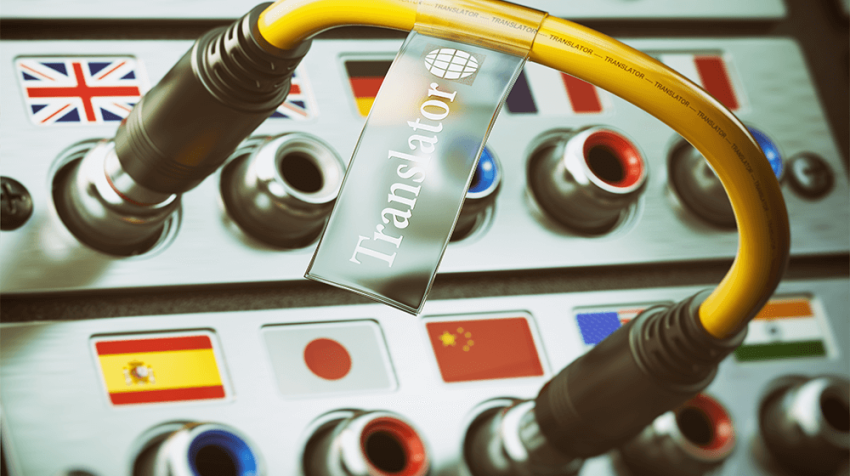 Google Translate and other translation software can be valuable tools when a user needs to quickly translate a word or phrase from one language to another. It’s not always as accurate as human translators, however, and mismatched language pairs can result in some hilarious misunderstandings.

Sometimes this technical faux pas is little more than a funny mistake for an individual user; other times a translation fail ends up printed in a confusing commercial capacity. Language translation can sometimes be a complicated matter, and even the best translator devices can deliver some epic fails.

Machine translation isn’t perfect, and even Google makes mistakes. In some cases, these translator fails turned into such hilarious errors we’ve found ourselves grateful for Google Translate’s imperfections.

1. That’s One Way to Keep People Out 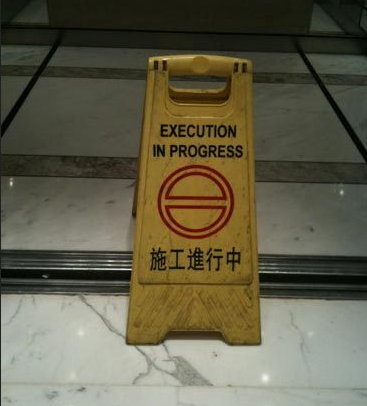 Somehow we don’t think the original message was warning of death in progress, but the resulting translation fail on this sign is certainly effective at preventing unwanted entry. 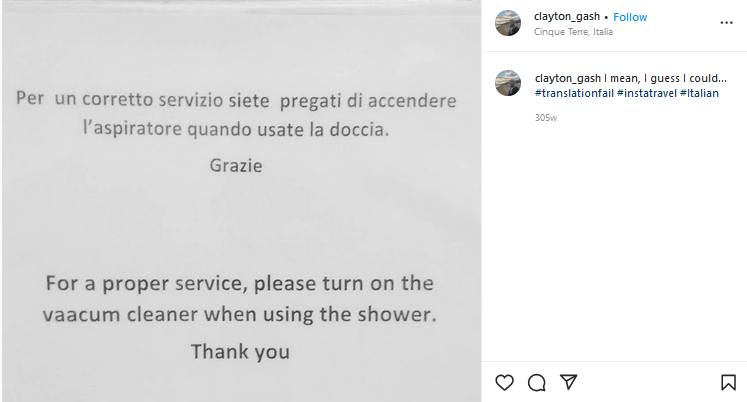 Accurate translations are important in the business world. After all, should some unsuspecting customers take this translator fail too seriously, it could result in a dangerous situation.

3. No Meal Is Complete Without Mountains of Rape 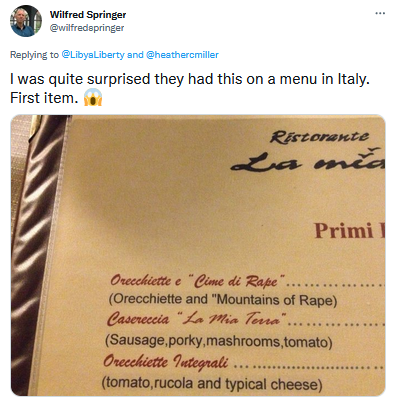 It can be a tricky process to translate one language to another. Unfortunately, menu translate fails are all too common, leaving diners to wonder exactly what it is they are ordering, such as in the translator fail above. 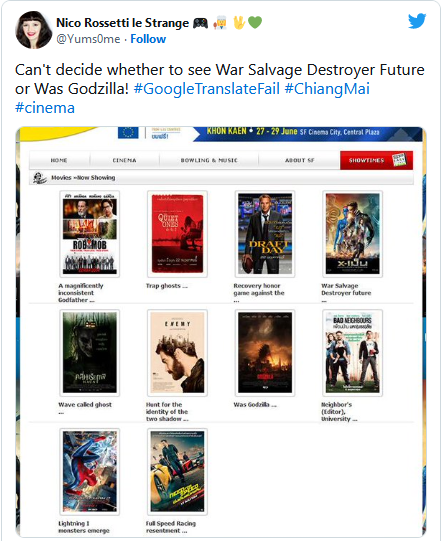 Movie titles apparently are subject to becoming lost in translation. In this translator fail example, a traveller was left to ponder whether they should watch “War Salvage Destroyer Future” or “Was Godzilla.” 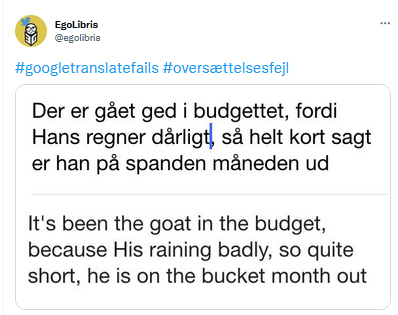 Too many translator fails leave users wondering what exactly the original text was trying to say. Surely in this example there’s not really a goat in the budget, and even if there is we highly doubt that he’s raining badly! 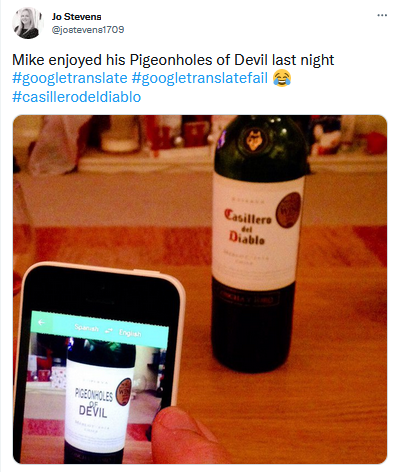 The introduction of Google Lens’ translation capabilities opens the door for all sorts of new translator fails. Want to read a label in a different language? No problem! No problem, that is, until the tool creates a hilarious translator fail like this one! 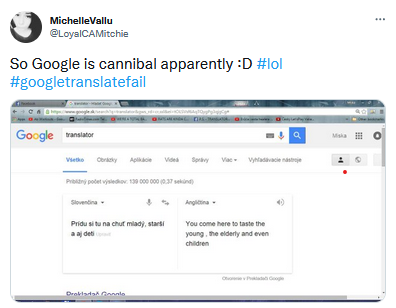 Sometimes a translator fail can be downright creepy, leaving a user to wonder just who is behind the responses from Google Translate. In this example, one Twitter users shared their disturbing translation that promises to taste the young. 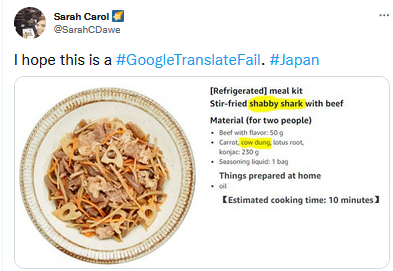 9. Thou Hast Some Strange Taste in Teas 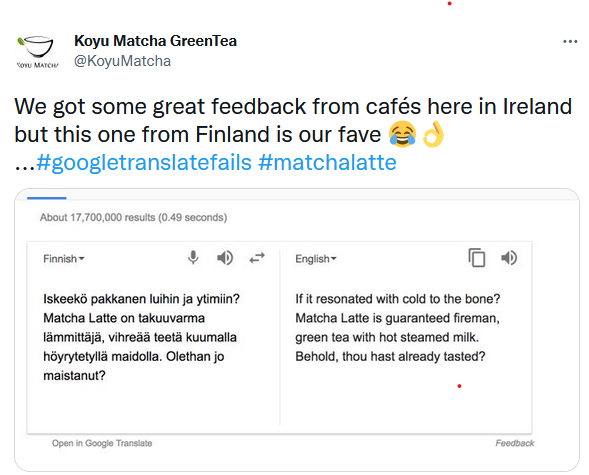 10. Want a Little Cat In Your Dumpling? 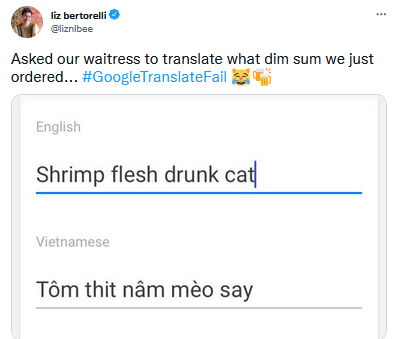 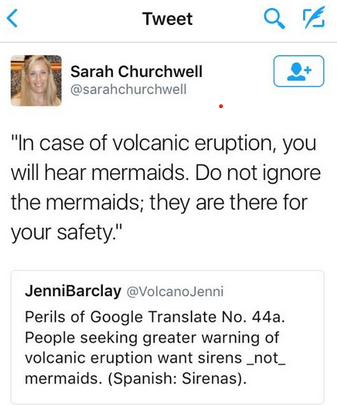 It’s easy to understand how someone learning a new language might make some of these mistakes, but we aren’t sure how Google Translate has so much trouble translating from Spanish to English. When translated, did this warning really advise to list to the mermaid… or could there be another word that means the same as “sirens.??

12. When You Have to Translate the Translation 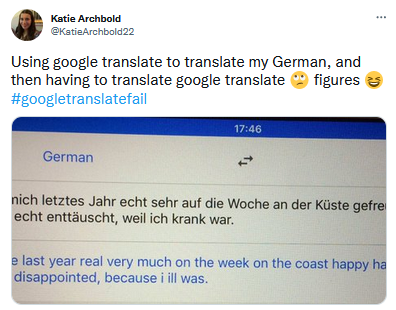 Sometimes messages are translated so poorly that Google Translate users are left wondering what the sentence is supposed to say. Regardless of what languages Google users are trying to translate, language errors like this one are too funny to be an annoyance for long.

13. At Least Google’s Heart Was in the Right Place 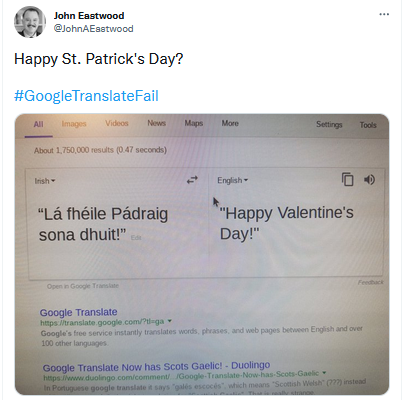 In this example of a Google Translate fail, the software knew it was translating a holiday greeting, but it got the date slightly wrong. Shall we forgive Google? After all, isn’t it the thought that counts in all languages?

14. But Can We Fault Google Translate for Trying? 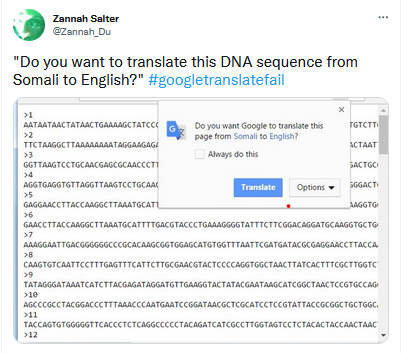 In yet another hilarious example of a Google Translate fail, the AI decided to suggest translating a DNA sequence. We have to commend Google for attempting to decipher what was never intended to be a sentence, and we’re sure the user got a good laugh from the suggestion in this hilarious example.

15. Who Knew the English Alphabet Was So Interesting? 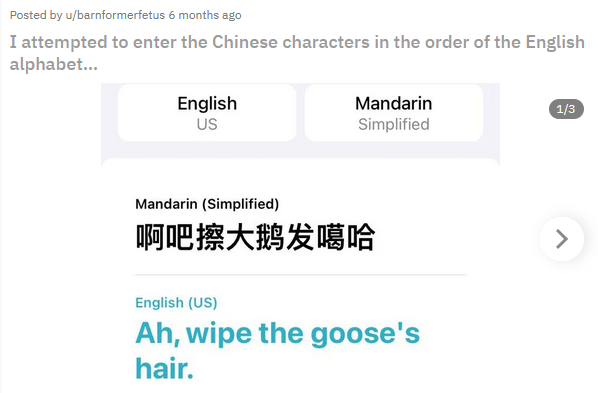 What happens when you use the internet to translate the English alphabet from Chinese back to English? You get more than a few random words. Instead, Google deciphers the characters to describe grooming a goose. You have to wonder what context was used to create this translation.

16. Season Your Meal with Child Poison 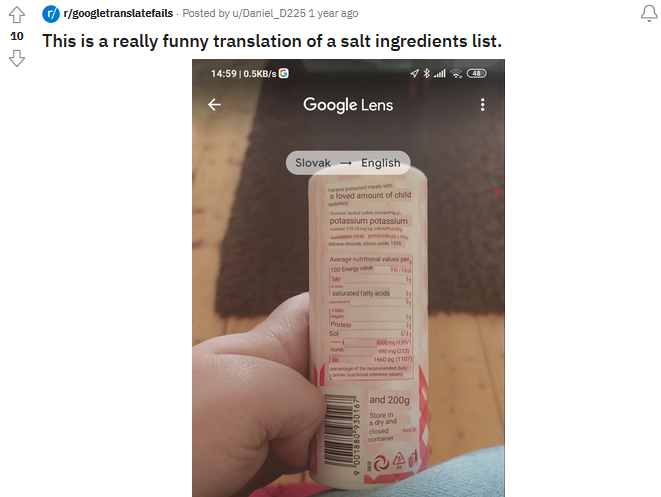 In what language are these salt ingredients printed that Google Lens translates the words to mean it’s poisoned with children? Sorry, Google, your technology needs some more work, but thanks for the laugh in this example of a Google Translate fail!