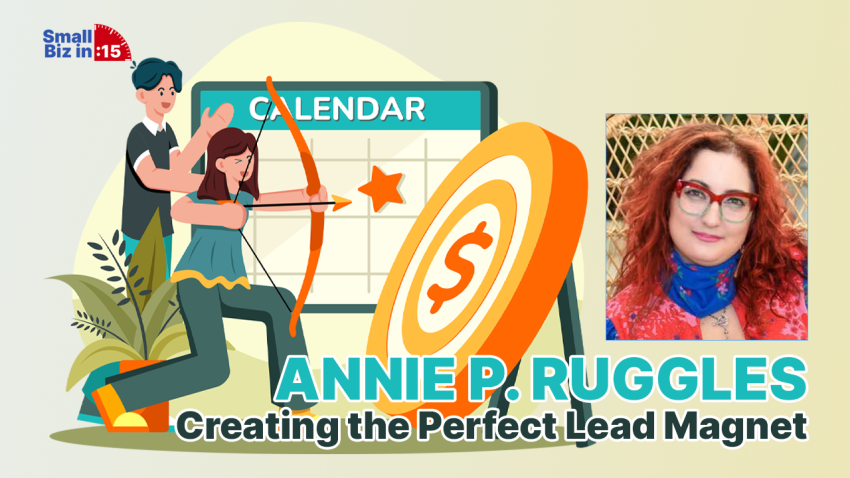 To attract more leads and close more deals, you need to have a lead magnet in place. What is a lead magnet? At its core, it’s simply a marketing strategy that generates leads by offering potential customers long-form resources in exchange for their contact info. However, there is a lot more to it than that, so let’s read on to find out more.

In this episode of Small Biz in :15, Small Business Trends Executive Editor, Shawn Hessinger, interviews Annie P. Ruggles about creating the perfect lead magnet. Andy is the Founder of the Non-Sleazy Sales Academy, and here she shares helpful tips with us that will help you create a powerful lead magnet to help you create leads and achieve your business goals.

Check out this edited transcript of their discussion on the latest episode of Small Biz in :15. You can also check out the full conversation above or listen to it on SoundCloud below.

Shawn Hessinger: What I want to know is how you define what a lead magnet is.

Annie P. Ruggles: I would call it an opportunity to solve a small problem.

I call them micro problem solvers in my business.

Shawn: I think most marketers would say it’s something you give away to make somebody sign up to your list, which doesn’t really explain it all.

Annie: I say it’s something you give away to prove your problem-solving prowess to the people that you want to partner with.

Annie: It absolutely is an audition — it’s, “Do I want to continue hanging out in this person’s world? Do I want to keep paying attention?”

Shawn Hessinger: So, if you were creating a lead magnet to get a list to sell a course on how to create these things, what would it look like?

Annie: I am wanting a lead magnet right now! So, I wrote an e-book and it is going out through my affiliates only. But my lead magnet is not the e-book itself. It’s an audiobook. Because I know from doing all of this podcasting, people seem to like my weird little “Muppety voice.”

I mean, I could be very, very literal with this example. So my e-book is called The Coach Who Would Not Sell. It is a noir novella with a workbook attached to it. And it’s so goofy — I’m always blending multiple things.

But the way that I have tackled this previously in the past is I did a webinar on the four types of sales avoidance. I would do live events on making selling easy without getting sleazy. I would do all these other things. But the central conceit of the noir novella is what I call sales baggage, which leads to sales avoidance. Those are my terms, but they’re easy to figure out, right?

So, what I’m looking at in that, and why I’m solving that problem. If you read the book, it’s going to ask you to confront your history of selling and how you came to define sales in the way that you have so that you can rewire that and you can also actively unlearn any nasty sales stuff you don’t need, right?

So, solve the problem before in the lead magnet. Get them out of sales avoidance and get them into sales possibility. They’ll go, “Oh, what do I say?!!!” “Now you hire me since I have a problem that hits that next level” is how I answer that question.

You know, if we were looking at it as the hero’s journey, right? Young King Arthur meets Merlin Doorway One. And because he meets Merlin, he thinks that maybe he could be more. Merlin shows him all kinds of power to get him out of his own head. Without that, Arthur’s not going for the sword in the stone. He’s like, “I’m a frickin’ weird farm kid. Leave me alone, weird wizard man. I don’t get this.”

Like, it’s too far apart. We can’t just jump to, “Hey, kid, walk up to the stone.” We have to be like, “Hey, kid, the world is magical, and you have a place in it. And you’re not just worthless.” We still have to do that first.

Okay, now we’re like, “You are going to rule England, dude. Once you pull that sword out, you are going to be King of Fantasy England. So, maybe we should brush up on some English history. We know you’re a squire, but like, let’s brush it up.”

That’s your mama bear content. “Are you about to become king of fictional England? Do you have no clue what you are doing because you were raised as a farm boy? Squire, here are the five things you need to know before.”

He can go pull the sword out of the stone, which is what we’re ultimately waiting for until he knows that he can do it. And how do we do it? We show him, then we go, “Okay. You’re really looking like you’re ready to rule. Why don’t you go over there and pull that sword out?” Okay, then he does it, he pulls the sword from the stone.

The second he pulls it, your lead magnets over because now he’s holding a sword and he’s king. And he doesn’t know what the heck he’s doing. What does he do? Hire Merlin. It’s a staircase. He cannot do any of those actions until he does the previous action.

Shawn Hessinger: So, small business owners are building the list, and they say, “Wow, I have to put one of those lead magnets in, don’t I? Otherwise, people won’t sign up. What’s one thing that they could do you think that would transform their thought process about this and start thinking about what they should be doing to get somebody, as you say, in their world?

My background is originally in theater; this was the most important thing that they teach at the beginning of theater school.

If someone opens a door and walks on stage, and they have no back story on where they’ve been at all — then they could be like, “Oh, sorry I’m late.” And they’re there and they’re in and they’re in the emotion — fine, whatever.

But what if I’ve decided that it’s raining outside? So sorry I’m late, and I’m brushing off the water on my thing. And I’m reaching for a towel and I’m wringing out my clothing. Now I have a whole reason for being late, and I said the exact same line, “Sorry I’m late.” I gave it context because I was giving it a moment before. Similarly, your clients have lives before they hire you.

Ask yourself what’s going on in their lives in relation to what they’re also ultimately hopefully going to hire you for. If you’re selling them an entree, then we should give them an appetizer. But it should still be in the same cuisine, right? We don’t want to totally, wildly change things up by trying to overwhelm them with too many bells and whistles.

So, what’s the moment before? If they’re coming into the program to solve a problem at 3:00, what’s their 2:15 problem? What is the precursor? What is the prerequisite to them being successful clients? What do they need to agree to? What have they needed to feel, think or change before they even come into the work to be successful?

If you could put that in a chronological timeline, you will never stress about your lead magnet again because you’ll just look backward in the rearview just a couple of inches.

Shawn Hessinger: Anything else that you think we should say, Andy?

Annie: You can make money converting from any lead magnet type. Don’t listen to the “shoulds.” Not everybody needs to be marketing their business on TikTok right now.

A lot of people should. But if you’re dealing with something sensitive, something that deals with older generations, something more financial or even medical, you’re not posting that on TikTok. So don’t worry about the trends.

You can make conversions, you can make money off of anything, literally any format, as long as it solves a problem.

If you enjoyed learning about generating leads, be sure to check out 10 Lead Magnet Ideas for Small Businesses.

Listen to this episode on SoundCloud:

Holly Chavez is a staff writer for Small Business Trends, where she writes engaging content about anything from starting your own upcycled art business to cryptocurrency scams to avoid. She is a former entrepreneur and industrial engineer who translates her decades of working in the logistics and manufacturing industry to actionable business tips and tricks.
5 Reactions
Leave a Reply Cancel reply
Subscribe
Follow @smallbiztrends
RSS LinkedIn Pinterest iTunes